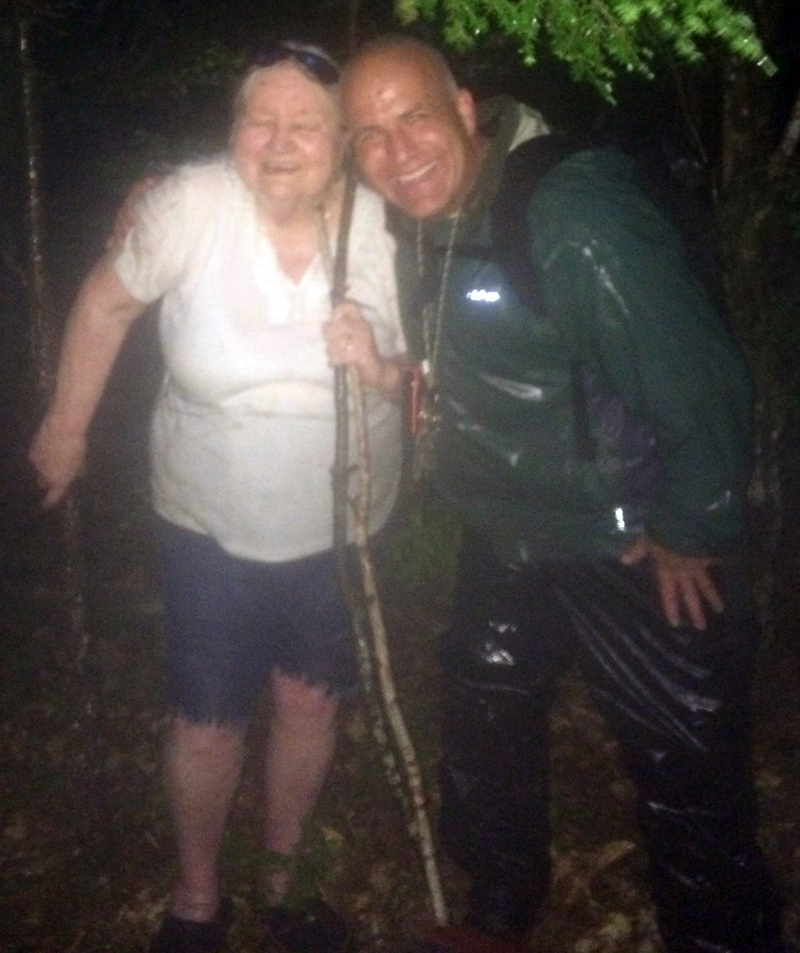 Maine Game Warden Dave Chabot with Helen Smith, shortly after Chabot and his K-9 partner, Ruby, found Smith in the woods behind her home during a rainstorm. (Photo courtesy Maine Warden Service)

A Maine Warden Service K-9 team located a missing 84-year-old Alna woman in the woods behind her home the evening of Tuesday, June 27. The woman was overdue for the insulin she takes to manage her diabetes.

The Lincoln County Sheriff’s Office requested the Warden Service’s assistance with the search for Helen Smith at about 6 p.m. Tuesday, according to a press release from Warden Service spokesman Cpl. John MacDonald.

Smith is believed to have dementia, MacDonald said in the press release. She had last been seen at her home on Rabbit Path Road at about 1 p.m. Tuesday.

Thunderstorms and periods of heavy rain were moving through the area, and Smith was thought to be wearing only a T-shirt and capri pants.

The K-9 teams developed a search plan, and Game Warden Dave Chabot attempted a track with his black Lab, Ruby. The three other teams began air scent deployments in areas across from Smith’s residence.

Within 30 minutes and just prior to dark, Chabot and Ruby completed a successful track and located Smith about four-tenths of a mile into the woods behind her home. Ruby had tracked Smith for nearly a mile, looping through the woods.

Smith was cold and wet from the rain but otherwise in good health. She was walked out of the woods and transported by a Maine Warden Service side-by-side ATV back to her home, where she was evaluated by medical personnel.