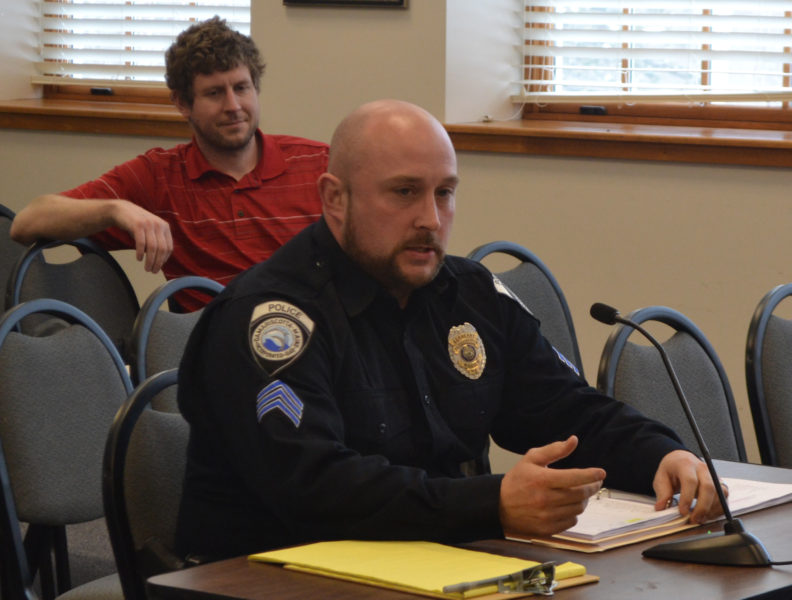 The Damariscotta Board of Selectmen has directed Town Manager Matt Lutkus to delay a search for a new police chief and have Sgt. Jason Warlick remain interim police chief indefinitely.

The board discussed the hiring process during an executive session Wednesday, March 15. The purpose of the closed-door session was for the board to discuss a personnel matter.

“We do have an interim chief for the time being, and we will see how that works,” Lutkus said. “It won’t be forever, but until further notice.”

As interim chief, Warlick received a $3 increase in his hourly rate. The increase is retroactive to when he began overseeing the day-to-day operations of the department in January, Lutkus said.

Young was placed on “non-disciplinary” paid administrative leave Jan. 12. The reason for a leave was a “confidential personnel matter” under state law, Lutkus said.

During the selectmen’s meeting, resident Jim Campbell asked if the reason for Young’s suspension would ever become public. Lutkus said the town is prevented from disclosing the reason for the administrative leave under state law.

“Seems to me, when all is said and done, you should be able to come up with an answer for the people who are kicking up this $17,000,” Campbell said.

As part of a separation agreement between the town and the chief, Young received a severance package worth $17,899.72, which included a “lump sum” payment of $8,256.50; a payment of $4,643.22, which represents three months of health-insurance premiums; and a $5,000 payment to Young’s attorney.

Young also received $2,344.11 for sick leave and vacation leave in accordance with town policy for all employees. The $2,344.11 was not part of his severance package.

The selectmen signed two warrants authorizing payments related to Young during the March 15 meeting. The first, a payroll warrant, totaled $15,555.64 and included the “lump sum,” the three months of health-insurance premiums, the sick leave and vacation leave, and a $311.81 refund from the first March payroll deduction, which represent Young’s contribution to his short-term disability insurance.

In response to Campbell’s comment, Lutkus said both his actions and the board’s actions were in the best interest of the town.

“Again, we’re limited in what we can say publicly, and this is a rare situation where we haven’t been as transparent as we would like to be,” Lutkus said. “I can say the end result was a business decision by the board.”

Campbell said he is not the only person in town wondering why the town’s past three police chiefs have been placed on administrative leave before eventually resigning. Lutkus said he hopes the town does not undergo another transition of chiefs in his tenure.

“I’ll do everything I can to make sure it’s a much longer tenure for the next chief, because I think it’s important we have a chief here for a long time,” Lutkus said.

The selectmen were scheduled to review the police department budget during the March 15 meeting. The review has been postponed until the board’s next meeting, Wednesday, April 5.