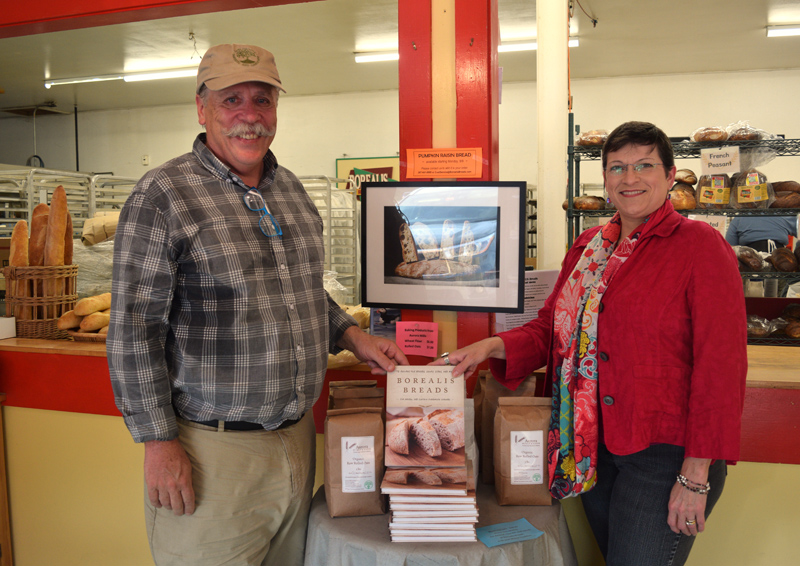 “I always tell people I’m all about spreading the gospel of good bread. A book is certainly a nice way to do that,” Jim Amaral, owner of Borealis Breads, said of publishing his first book with food writer Cynthia Finnemore Simonds.

“It seemed like a good, natural pairing,” Amaral said.

The pair created an outline and pitched their book to Down East Books, a publishing company in Rockport, which approved the project immediately.

Amaral said Finnemore Simonds was “instrumental” in this process, since she had worked with Down East Books to publish her three cookbooks.

They signed a contract in November 2015. The book, “Borealis Breads: 75 Recipes for Breads, Soups, Sides, and More,” was published in April.

It is available for $28.95 at most local independent bookstores, such as Sherman’s Maine Coast Book Shops, as well as at Borealis Breads in Waldoboro and Wells, farmers markets in Bath, Boothbay, Brunswick, and Damariscotta, and online.

A baker for nearly 50 years, Amaral said he got into bread because of his love for books.

In high school, the avid reader frequented a bookstore in Concord, Mass., where there was also a bakery downtown. One day the bakery was looking for help.

“I took that job because they paid you cash every Saturday, so I could take my pay and go to the bookstore and buy three or four books I was going to read that week,” Amaral said.

His co-workers took him under their wings. He never stopped having to wash the floors, he said, but he did learn how to bake in the early to mid-’70s.

Later he put himself through Bates College by working at the bakery in Massachusetts. He learned sourdough bread-baking at various bakeries in Seattle from 1990-1992, then moved back to Maine.

He moved around in the state before leasing a space to make bread in Waldoboro village in June 1993. The business expanded quickly.

He moved to his current Waldoboro location on Route 1, which he owns, in the summer of 1995.

Finnemore Simonds has loved to cook since she was young. She started a catering business when she was 13 and ran it for 13 years.

“I had always saved the recipes I was creating, so I had several blank books full of handwritten recipes,” she said.

She is the author of “Fresh Maine Salads,” “Superb Maine Soups,” and “Delicious Maine Desserts.”

After “Delicious Maine Desserts” came out in 2009, she met a videographer through a friend and they started a production company. In 2010, they made a show called “Fresh to Flavorful” that aired on the Maine Public Broadcasting Network, and online on the MPBN and PBS websites.

She has co-authored another book, “Gelato Fiasco: Recipes and Stories From America’s Best Gelato Makers,” with the owners of Gelato Fiasco, which came out from Down East Books last fall.

“For me, my whole reason for writing cookbooks is to get people back in the kitchen and help people find the joy in bringing ingredients together and making something beautiful and delicious,” Finnemore Simonds said.

Amaral and Simonds’ book is a baking book; however, it is different from others in the genre.

Unlike most baking books, it pairs bread recipes with Finnemore Simonds’ recipes for soups, sides, and other foods that go with or on bread. All the photos inside the book were taken by Amaral.

“It has a lot more versatility than just a regular baking book,” Amaral said.

Amaral’s bread formulas focus almost exclusively on sourdough baking. The book lists the measurements to make bread by both weight and volume.

“Any professional baker is going to weigh ingredients by weight. It’s the most accurate way to do it, so I try to encourage home bakers to do that as well,” Amaral said. However, a reader can still follow recipes with measuring cups instead of a scale.

According to Finnemore Simonds, for someone with Amaral’s level of experience baking bread, it becomes easy to look at dough and know what to do next.

“I don’t know how many millions of loaves of bread you’ve baked at this point, but … ” Finnemore Simonds started. 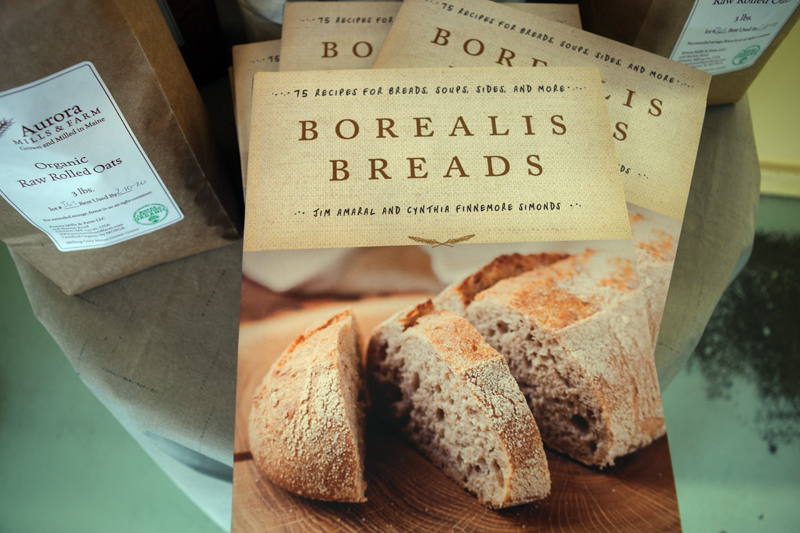 Finnemore Simonds laughed and finished her statement: “You get to know exactly what’s what in the process.”

The book includes tips for home bakers. “What we’ve done is make the process clear and understandable,” Finnemore Simonds said.

“By having the book, you have an incredible toolbox to use for baking anything sourdough going forward,” she said.

In addition to recipes, Amaral gives a history of the “grain renaissance” in Maine, in which he has played a major part.

“When Jim started baking, there was no one growing any sort of quantity of grain for bread-baking for human consumption in the state,” Finnemore Simonds said. “This guy is really the reason that has happened.”

Amaral started working with one farmer in Aroostook County, Matt Williams. Prior to that, he could only source a tiny amount of locally grown wheat, of subpar quality.

“If you wanted to go to a time where there were farmers growing wheat in Maine, millers milling it, and bakers baking with it, so all three of those operations being in this state, you would probably have to go to the late 1800s,” Amaral said.

He said grain farmers began moving to the Midwest and milling became an industrial operation, mostly in the Midwest as well.

When Amaral asked around, farmers did not have much experience growing wheat in the state.

Amaral works with four ingredients to make his bread – flour, water, salt, and sourdough starter. The quality of those ingredients matter, he said. When he works with a local farmer, he knows more about the source of the flour. If it is being milled locally, the flour is fresher.

“With the help of the University of Maine, they had to recreate a whole knowledge base around it,” he said.

“My going to Matt Williams up in Aroostook County saying, ‘I would like you to grow wheat for me,’ that was the seed of the grain renaissance in Maine,” Amaral said. As time went by, the demand grew as well as the number of growers.

Finnemore Simonds wrote all of her recipes in the second half and organized the book, while Amaral wrote about the grain renaissance and the bread formulas.

Amaral hopes the book will “demystify” the sourdough bread-making process and encourage people to make baking bread part of their lives.

Amaral believes it is important to have young people baking bread at home because “we need the next generation of bakers.”

A book-signing with Amaral and Finnemore Simonds will take place at Sherman’s Maine Coast Book Shop in Damariscotta at 1 p.m., Sunday, Sept. 15. Everyone who purchases a book will receive a sourdough starter, which is flour and water fermented by wild yeast and bacteria to make bread.

The authors will teach some baking classes this fall. For more information, email mindfulmouthful@gmail.com.