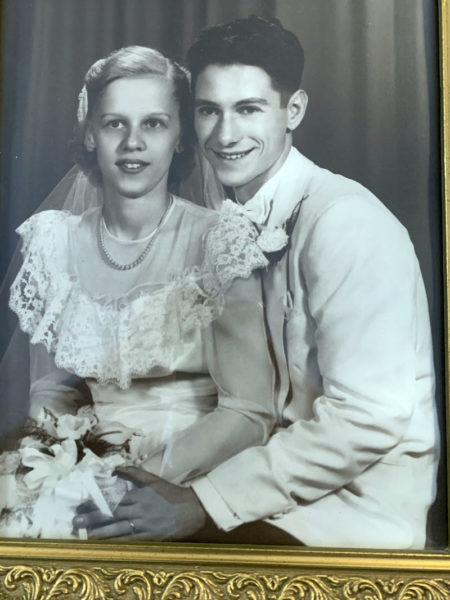 Bob and Gloria Meixell on their wedding day, Aug. 26, 1950. The couple is celebrating 70 years of marriage. (Photo courtesy Barbara Sawyer)

Bob and Gloria Meixell, both 91, celebrated their 70th wedding anniversary on Wednesday, Aug. 26. The couple has lived on Westport Island for 45 years in a house they built together and have continued to improve. According to Sawyer, the Meixells were still laying bricks and mortar in their 80s.

Bob and Gloria were high school sweethearts, meeting at their high school’s Thanksgiving dance in Northampton County, Pa. in 1944. The couple stayed together after high school while Gloria went to nursing school and Bob entered the U.S. Navy. He served for 22 years before retiring in 1968. The family came to Maine when Bob was stationed in Brunswick.

They got married in Pennsylvania in 1950 and over the next seven years they had four children — Barbara, Kathy, Bob, and Jim. Jim and his family live next door to the Meixells and help take care of them.

The couple spent their 60th anniversary in 2010 surrounded by friends and family at a surprise party in the municipal parking lot behind Renys Underground in Damariscotta. This year, due to the pandemic, they celebrated at home in Westport Island with their family on Aug. 16.

Sawyer and her husband, Herb, traveled to Maine from their home in Pensacola, Fla. for the event.

“We got haddock chowder and desserts from Sarah’s, and made our own lobster rolls with lobsters from the Westport Island co-op,” Sawyer said. She read aloud emails to the Meixells from Renys staff who remembered the party in the parking lot 10 years ago.