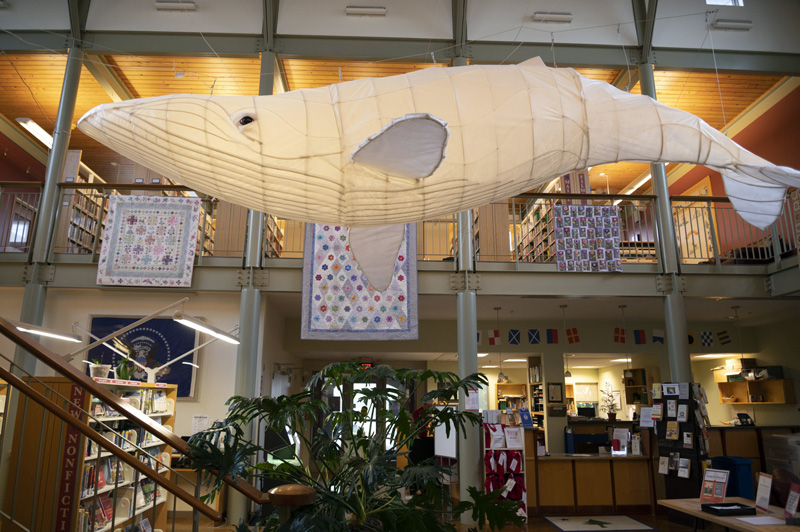 A 20-foot white whale floats above the first floor of the Skidompha Library in Damariscotta on Sunday, Sept. 11. The sculpture is crafted from wood, PVC pipe, and nonwoven cloth, and lit from within by strips of miniature LED lights. (Bisi Cameron Yee photo)

A young albino humpback whale floats calmly, its large brown eye rolled slightly upward to see the world above. Long ventral grooves travel from its mouth to its belly, and a unique skeletal structure seems to capture the very shape of the waves that would surround it in its natural environment.

However, this whale is not in its natural environment. It is suspended in air in the atrium of the Skidompha Library in Damariscotta.

Named Migaloo after the only albino whale known to exist in the 20th century, the three-dimensional, 20-foot-long sculpture of wood, PVC pipe, and nonwoven fabric was installed at the library by a small team of staff and volunteers on Sunday, Sept. 11.

Children’s Librarian Jessie Trafton had long wanted to utilize the atrium space for an art installation. Trafton, who holds a degree in marine biology, was in favor of something inspired by the sea. “I’ve always thought we needed a whale hanging from the ceiling,” she said.

After batting ideas around with artist and library volunteer Erica Qualey, she brought a proposal to Skidompha Executive Director Matthew Graff and applied for a grant to fund the project.

The whale was designed by Qualey, who is better known as a watercolor artist although she has also created any number of small three-dimensional sculptures. While this is the largest sculpture she has built, Qualey has been involved with other large-scale projects and has a background in industrial design.

Qualey built the whale with the help of talented puppet and marionette crafter Melissa Glendinning.

“She has a magic about her,” Qualey said of Glendinning’s work, which has included a 14-foot dragon marionette that required multiple people to operate.

Qualey has often brought her artistic and teaching skills to the library’s patrons. She worked with Trafton to conceive and create the “Oceans of Possibilities” community mural that currently hangs from the library’s exterior facade.

Graff described Qualey as “one of the best partners this library has ever had and a delight to work with. And as you can see enormously talented.”

The design process for the sculpture took about a month. The build, according to Qualey, took another month.

Graf said “Project Cetacean,” as it became known, was kept a surprise because they were unsure of how the installation would go. This was the library’s first attempt at suspending a 3D sculpture of such size.

There were a number of challenges to be overcome, the most obvious one being the height of the atrium ceiling and getting the whale lifted to its final position.

The installation crew used a two-story tall ladder to thread guide wires through carabineer style hooks attached to posts on the second floor. Wires were run through a section of translucent hose and attached to six contact points along the spine of the sculpture.

Completing and installing the sculpture took approximately seven hours, between connecting the three sections, placing and testing the lighting system, gluing the final bits of fabric into place, and engineering the positioning of the guide wires and the backup suspension plan to ensure Migaloo would not fall.

According to Qualey, the cable used was rated well above what would be required for the weight of the sculpture. She said they definitely overbuilt the suspension system with an eye to safety.

Qualey loved the idea of creating the sculpture to scale, the same size as a young whale calf just several weeks old. “It’s so hard to understand the size of a whale,” she said.

“I wanted to make it look like it had that feeling of water and fluidity and motion,” she said. The curves of the skeleton started from the very first line created for the spine and kept evolving. Qualey added more curves to further accentuate the shape of the whale, to capture “the grace and the movement they have in real life.”

The ventral grooves were made with heavier materials for bolder lines, less fluidity. Qualey likes how they contrast with the fluidity along the sides and of the overall design.

The sculpture is lit from inside with long strips of miniature LED lights and the all-white color adds to the simplicity and brings the focus to the form.

Qualey initially planned to add in some subtle colors but when she saw how beautifully the LED lights shone through the fabric, she decided to keep it simplistic to keep the focus on the lines of the sculpture and give a nod to its handmade structural aspect.

Trafton already held one children’s activity based on the whale in August before it was even placed. Kids built small scale kinetic whales from clay and hung them in the children’s department as a tie into the summer reading program.

She is also envisioning a program that addresses the concept of the tensile strength to illustrate how things can be very strong but very light. For the younger kids she may plan an activity around whale song.

Qualey said she hopes that the work brings “an awareness of the beauty around (us). We are so fortunate to live where we live.”