With a single amendment to the budget to appropriate $100 for Maine Public, residents approved the $1,098,799 municipal budget with little discussion. The budget was an increase of $56,439 or 5.42 percent from the previous year.

The selectmen will also use $29,000 from surplus to fund repairs to the municipal fire station and town office.

The repairs will include the installation of two heat pumps to increase the efficiency of the town office, insulation and ventilation improvements, the replacement of a carpet, and increasing the counter space in the town office, Selectman Lester Sheaffer said.

The town will also install awnings over emergency exits at the fire department to prevent the exits from being blocked by snow, Sheaffer said.

After hearing the plans for the funds, voters approved the $29,000 without further discussion.

The budget article regarding funding requests from organizations drew the most conversation from residents. The article totaled $6,617, an increase of $850 or 14.74 percent from the previous year.

Two organizations, LifeFlight and Maine Public, submitted requests for funding to the town, but were not recommended by the Whitefield Board of Selectmen or the Whitefield Budget Committee

Louis Sell made a motion to restore LifeFlight’s original request of $575 as a “symbolic gesture” for the people who risk their lives by flying the helicopters.

The amendment garnered a lengthy amount of discussion, with many residents commenting on personal experiences with LifeFlight. Ultimately, the amendment failed.

Curry Caputo made a motion to restore Maine Public’s original request of $100. After a brief discussion, the amendment passed 41-22. 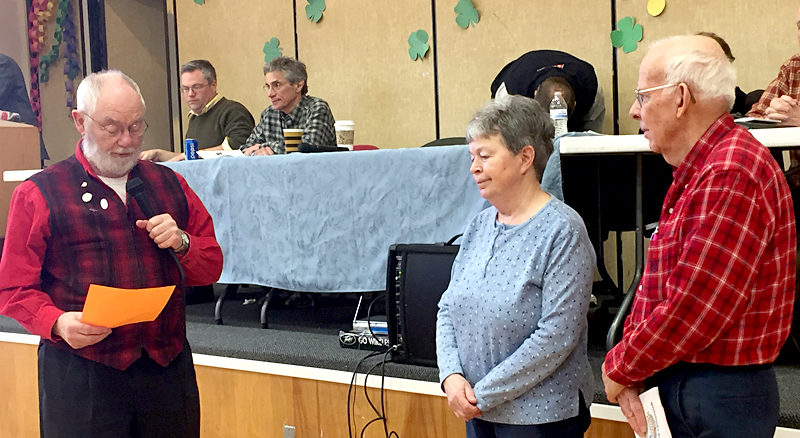 The Haydens have worked tirelessly for Whitefield since moving there in the ’70s, from volunteering their time at various town functions to picking up trash on their evening walks, Ober said.

“It is the selfless giving of their time that makes Barbara and David the right choice for this award,” Ober said. “When there’s a need, you can count on them to step up.”

There will be a countywide Spirit of America Award ceremony in November.

Whitefield residents give David and Barbara Hayden a standing ovation during the annual town meeting Saturday, March 18. The Whitefield Board of Selectmen honored the Haydens with the Spirit of America Award for their volunteerism. (Maia Zewert photo)

Residents also received an update on the work of the Whitefield Economic Development Committee. The selectmen established the ad hoc committee in the summer of 2016.

Sell, the interim chair of the committee, described the work the committee accomplished in the past year, including sending separate questionnaires to businesses and residents.

Based on the responses to the two questionnaires, the committee came up with four recommendations, including establishing the economic development committee as a standing committee to encourage new business and growth of existing businesses in Whitefield while preserving the town’s rural character.

The second recommendation is to create a “brand” for Whitefield that would help promote businesses, particularly agricultural businesses and farms, Sell said. Newly elected Selectman Bill McKeen designed a logo featuring a farm that appears on the back of the Whitefield annual report.

The third recommendation was for the continuation of study into internet resources available to the town, and the fourth was to study possible incentives and regulations affecting economic development and the preservation of Whitefield’s rural character. The committee hopes to present further recommendations on the final two items in 2018, Sell said.

One thing that came in “loud and clear” from almost every questionnaire response was a strong desire to preserve Whitefield’s rural character, Sell said.

With preliminary figures for state funds lower than anticipated and Gov. Paul LePage’s proposed changes to education funding, the local share of the proposed budget is currently estimated to be $11,456,474, an increase of $732,763 or 6.83 percent from the previous year.

RSU 12 representatives will present the budget to the Whitefield Board of Selectmen later this month. The annual budget meeting will take place in May, followed by a referendum vote in June.

Tuttle encouraged residents to be involved in the process.

“We want as many people involved as possible, and we want to hear from you,” Tuttle said.

More information about the budget will soon be available on the RSU 12 website, Tuttle said.