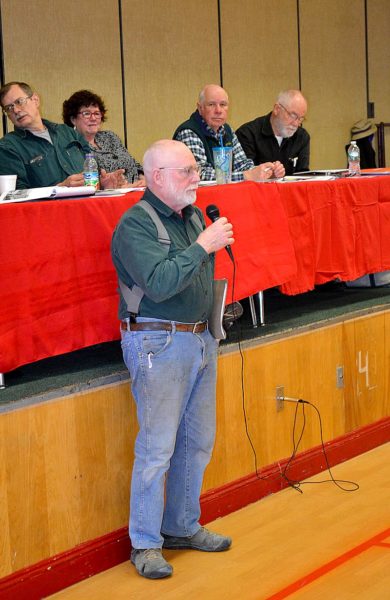 Erik Ekholm stands in front of the Whitefield Board of Selectmen at Whitefield’s annual town meeting in March to advocate for a warrant article authorizing selectmen to negotiate a contract for a municipal solar installation. Selectmen from left: Lester Sheaffer, Sue McKeen, Dennis Merrill, and Frank Ober. (Abigail Adams photo, LCN file)

The future of net metering for solar energy producers remains uncertain; however, the Whitefield Board of Selectmen voted to move forward with a lease agreement for a grid-tied solar installation at its Tuesday, Oct. 11 meeting.

After months of negotiations and legal review to ensure Whitefield was protected from any financial loss as a result of future regulatory or legislative changes, selectmen voted for and signed a final contract with The Power Co., of Washington, based on the current net metering billing credit.

Whitefield voters authorized the board of selectmen to negotiate a contract for a power-purchase agreement, or a lease with the option to buy at the end of a certain time frame, at the March town meeting. Plans to initiate negotiations were derailed by Gov. Paul LePage’s veto of “An Act to Modernize Maine’s Solar Power Policy” and fear in the solar industry that the Maine Public Utilities Commission would phase out net metering.

Undeterred, Richard Simon, of The Power Co., expressed interest in continuing to negotiate with the town to find a solution that would allow the project to continue and protect the town from financial loss.

Net metering, a credit from a utility company to the electrical bill of owners of solar systems that produce energy for the electrical grid, was one of the most divisive issues in the last legislative session.

A vote to override Gov. Paul LePage’s veto of the solar bill that would have codified net metering into law was defeated in the House of Representatives by two votes.

The Public Utilities Commission, a three-person board appointed by the governor, is now responsible for determining net metering policy unless the Legislature takes action in the next legislative session. The commission recently proposed phasing out net metering for grid-tied solar installations in the next 10-15 years, according to media reports.

Solar policy and net metering is a central focus of both Republican and Democratic campaigns for the Legislature, with some candidates indicating the solar bill will be reintroduced in the next legislative session.

Democratic candidates have argued that the net metering billing credit, which enables owners of a solar installation to recoup their investment through savings in energy costs, is a smart investment in renewable energy and will have long-term positive benefits. Republicans have argued that through net metering, solar energy is being purchased at above market rates, which increases the cost of electricity for other ratepayers.

Regardless of future changes to net metering, Whitefield will pay $234.64 a month for the first year of a lease of a solar installation designed to produce enough energy to power the town’s six municipal buildings.

The monthly payments are a 10 percent decrease from the average electric consumption of the town office, the municipal fire station, the recycling center, the salt-and-sand shed, the Coopers Mills Fire Station, and the Kings Mills Fire Station.

The contract developed with The Power Co. addressed not only selectmen’s concerns about changes to net metering, but also concerns that the solar installation was oversized and the town would pay for the production of energy it did not consume.

The final contract includes clauses that protect the town from financial loss as a result of any future changes to net metering, and adjusts the lease payment in the event the system generates more power than consumed.

The system to be installed on the roof of the municipal fire station is an 18.72-kilowatt solar array capable of producing 25,028 kilowatt hours of electricity annually. According to the lease agreement, the solar system can be expanded if needed.

The lease payment will be recalculated after the first year of operation, using a formula that considers the equipment’s electrical output, the town’s electricity costs, and a 10 percent discount. The recalculation will determine the lease payment for the next three years, and will be adjusted in years five, eight, 11, 14, and 17, according to the contract.

The town will have the option to purchase the system in 2022 for $26,725, and become its own energy producer. Six years after the system becomes operational, voters will determine whether to move forward with purchasing it. Unless purchased, the town will continue to lease the equipment from The Power Co. to cover its electrical costs.

“The town can’t lose on this,” Whitefield Board of Selectmen Chairman Dennis Merrill said. “Every contingency and concern has been addressed.”

Due to the formula used to calculate lease payments, the town is guaranteed a 10 percent reduction on electrical costs. “We can only save money,” Selectman Tony Marple said.

Selectman Lester Sheaffer, who powers his home with an off-the-grid solar energy system, was the only opposing vote on the board to the lease agreement. “I’m still feeling there’s a rip-off in here someplace,” Sheaffer said. “I don’t see how they’re making money.”

Sheaffer questioned why a business was willing to enter into a contract that is more beneficial to the other party than it is to the business.

“It’s the only way we would have signed it,” Marple said, in response. Simon is also a passionate advocate of solar energy, he said.

“I really didn’t think we’d be able to do this at all,” Marple said.