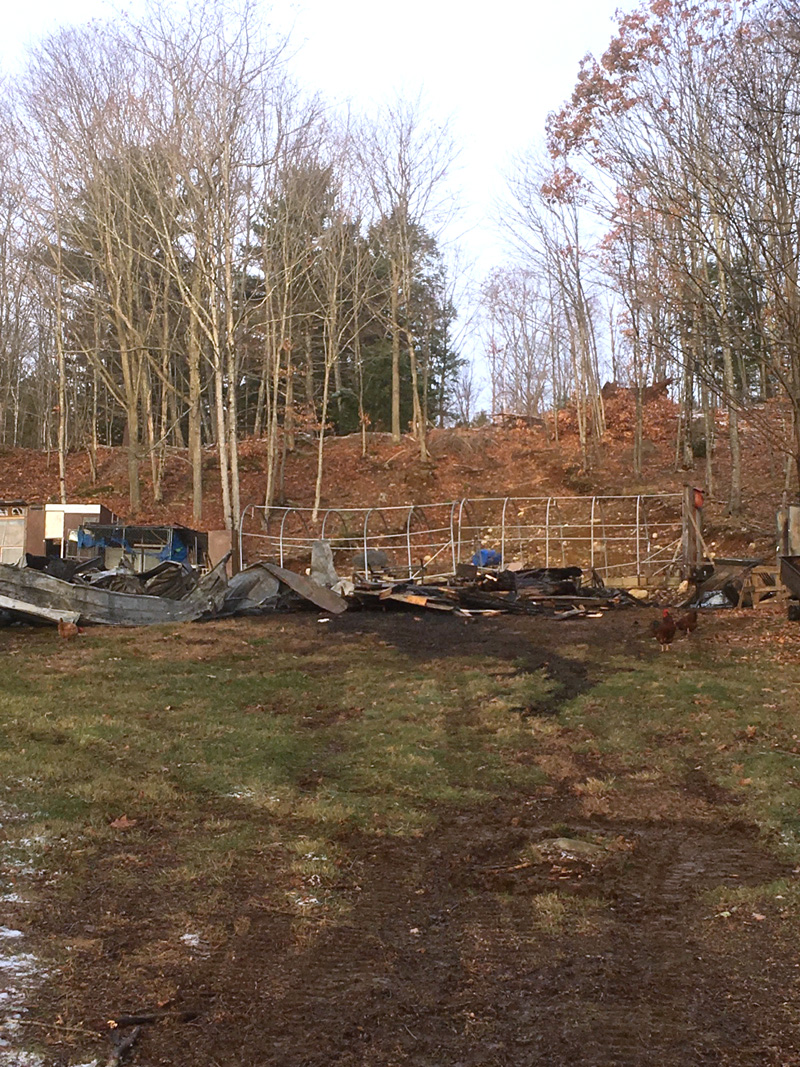 The remnants of a barn at 222 Hunts Meadow Road in Whitefield after a fire early Tuesday, Nov. 14. The structure was engulfed in flames and collapsing by the time firefighters arrived minutes after a 3:19 a.m. call. (Christine LaPado-Breglia photo)

A barn at 222 Hunts Meadow Road in Whitefield that was used as a welding workshop and a storage space for “upward of $50,000” in welding equipment and ATVs burned to the ground early Tuesday, Nov. 14, according to Whitefield Deputy Fire Chief Tom Feeney. There were no injuries, as the building was uninhabited at the time.

Four Whitefield firefighters, who live within a half-mile of the wood and metal barn, arrived a couple of minutes after the call came in, said Feeney, who was one of the four.

“It was fully involved and collapsing, and all we could do was protect exposure and extinguish the remnant of the building,” Feeney said. He said an adjacent home on the property sustained damage from radiant heat, as did two vehicles on the property.

Mae Belle Mayo owns and lives in the home, according to town records. No evacuations were necessary.

The house is insured, but the barn was not, Feeney said.

Feeney said that when firefighters arrived, they focused on limiting damage to the house and the vehicles in the driveway. “After we had that under control, we could start to work on the fire,” he said. “We used a tank of water from each of (the mutual-aid departments) and released them as quickly as we could.”

Feeney said that “the older gentleman whose workshop it was thought (the fire) started from the wood stove. He said he was using it the night before and woke up and there was fire everywhere.” The man lives in the adjacent house.

Feeney said the fire is not suspicious.

Whitefield cleared the scene at 5:55 a.m., according to Feeney.