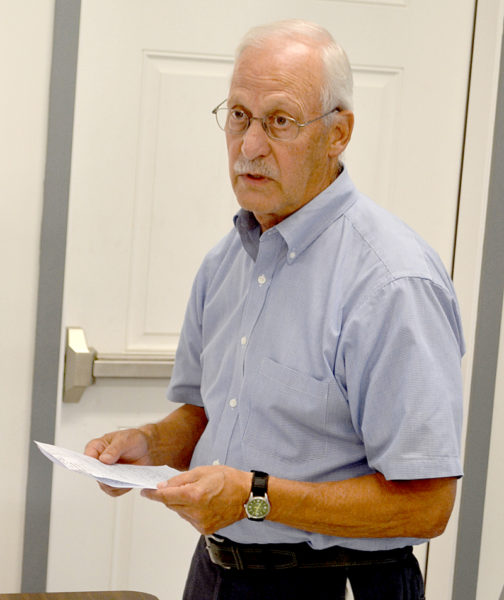 Jim Hebert, of Black Diamond Consultants, presents an application for the construction of a U.S. Cellular cellphone tower on Townhouse Road to the Whitefield Planning Board on Wednesday, July 20. (Abigail Adams photo)

A proposed cellphone tower that would provide new and improved coverage for several areas of Whitefield is heading for a public hearing, following the submission of what Whitefield Planning Board members called “a very thorough proposal.”

Black Diamond Consultants, acting on behalf of U.S. Cellular, submitted a partial development application for a 190-foot monopole cellphone tower with 12 antennas to the Whitefield Planning Board on Wednesday, July 20.

Board members raised several questions during Black Diamond representative Jim Hebert’s presentation, including one about microwave radiation, which Hebert said he had never been asked about before.

With the majority of questions answered, the planning board requested that the road commissioner approve the road to the tower site before ruling the application complete, and scheduled a public hearing for Aug. 17.

The cellphone tower, once approved, will be built on land leased from John Pagurko at 571 Townhouse Road. The tower and equipment shelter will be located within a 75-square-foot area protected by an 8-foot-high locked fence, according to the application.

The location of the tower is central to six other U.S. Cellular towers in the area, which range from Augusta and Windsor to Dresden. The location of the tower will ensure continuous coverage and limit dropped calls, Hebert said. The tower will provide new coverage to parts of Whitefield, including along Route 218, and improve coverage along Routes 126 and 194, according to the application.

The tower has already received Federal Communications Commission approval and requires no lights, Hebert said. The tower’s dozen antennas will include six for broadband access and six for voice, and the antennas will not exceed the 190-foot height of the tower, Hebert said.

The tower also has room for additional antennas if another cellphone provider is interested in entering into an agreement to rent space on the tower to provide coverage to their customers, Hebert said.

Planning board member Marianne Marple asked about radio frequencies and the risk of exposure to radiation, a question Hebert said he had never been asked before, despite preparing several applications for telecommunications companies.

According to Hebert, the antennas are located more than 33 feet above ground, making them exempt to minimum exposure requirements under FCC regulations. Due to their height, the frequencies are not believed to have any impact on human or animal life, Hebert said.

According to Hebert, construction of the tower is planned for 2017; however, based on budgets and the timeline of approval, construction could begin in 2016. There is currently a tractor road to the site, which U.S. Cellular will upgrade to handle the heavy vehicles needed for construction.

The planning board asked Hebert to run plans for the road by the road commissioner to ensure there are no sight-line hazards.

Due to the overwhelming support in Whitefield for a cellphone tower, which was reflected in the vote to change the wireless communications ordinance to allow cellphone towers to reach a height of 199 feet, planning board members questioned whether a public hearing for the project was necessary.

They opted to schedule a hearing anyway to provide an opportunity for abutters to weigh in on the project. The hearing will be held Wednesday, Aug. 17 at 7 p.m. at Whitefield’s municipal fire station.