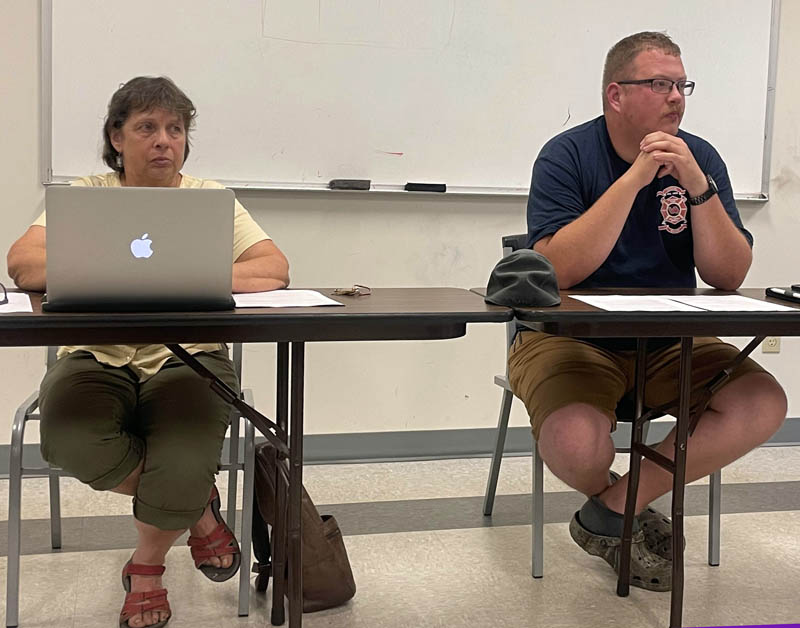 Whitefield Select Board member Charlene Donahue and Emergency Medical Services Chief Benjamin Caron listen to a comment during a meeting at the towns central fire station on Monday, July 18. About 20 first responders, town officials, and residents gathered to discuss the impending loss of the towns emergency medical service and the need to find for volunteers for community service. (Sherwood Olin photo)

Looking ahead to the potential loss of its emergency medical services department, Whitefield residents convened at the town’s central fire station Monday, July 18, to brainstorm ideas to solve the problem.

At the end of the near two-hour meeting, firefighters Steve Cowles and Joshua Johnson agreed to meet with the select board to continue working on the issue.

The issue moved to the fore for the town after current Whitefield EMS Chief Benjamin Caron told the select board July 5 he was moving out of town in the near future to be closer to his place of employment. Caron is employed full time as a firefighter in Ellsworth.

The consensus of comments Monday night focused on the need to increase recruiting efforts and the ongoing difficulty in finding willing volunteers.

Several times during the meeting, with increasing firmness each time, Whitefield Select Board member Charlene Donahue repeatedly suggested the town form an “auxiliary” to the fire department; a body that could focus on recruiting, public relations, and other supportive efforts that do not require training.

Late in the meeting, Donahue responded to several comments collectively suggesting the select board take the lead addressing the problem.

The board recognizes the problem, Donahue said, but there is a lot of work to do and only so much time to do it.

“Just let the select board do it,” she said. “Well, we need help with that.”

Late in the meeting, Donahue asked if anyone was willing to volunteer their time to work on the problem for the town. She was answered by a long, pregnant silence. Shortly thereafter Cowles and Johnson agreed to work on the issue with the board.

Much of the discussion focused on the training and the time commitments required of emergency services volunteers. Whitefield Deputy Fire Chief Bryan Ross said his commitment to the service, while rewarding, has caused him to miss various family and personal commitments during his career.

At another point, he addressed the mental toll emergency services work can exact.