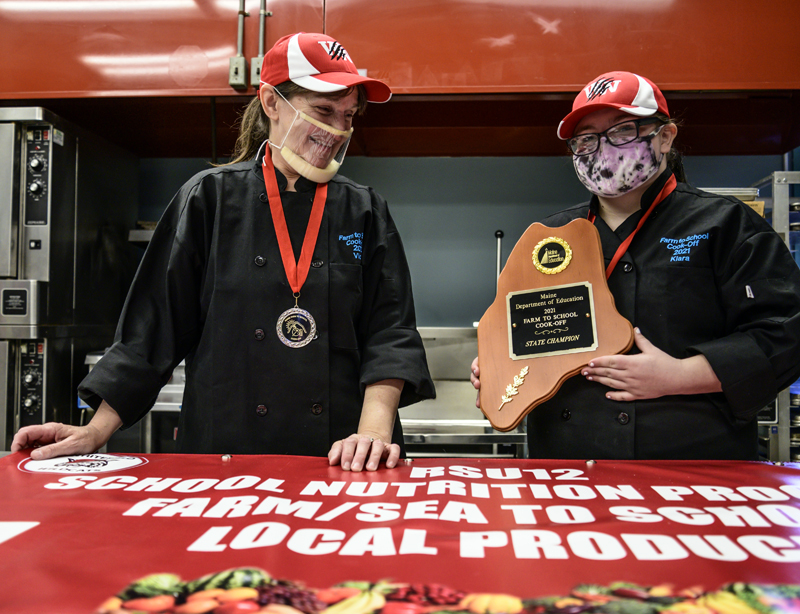 On Wednesday, May 5, the state championship was on the line in the Child Nutrition Culinary Classroom in Augusta, where teams from two schools pitted their nutritious creations against each other. The Whitefield Wildcats came away victorious.

The cook-off is a statewide culinary competition in which two-person teams consisting of a student and a member of the school’s nutritional staff prepare meals that promote the use of local ingredients.

Whitefield’s first meal was a breakfast burrito made with local eggs and fresh, local produce served with a smoothie made with Maine blueberries and local Greek yogurt.

“She was completely dead focused — right out front,” Dill said of Luce. “She rocked it — the judges commented on how laser focused she was.”

Lunch was baked haddock served with parsnip chips — a tried and tested favorite from the school’s lunchroom rotation — with apple crisp for dessert. According to Dill, they serve the fish every Thursday and there is one child who will only eat on the days they have fish. 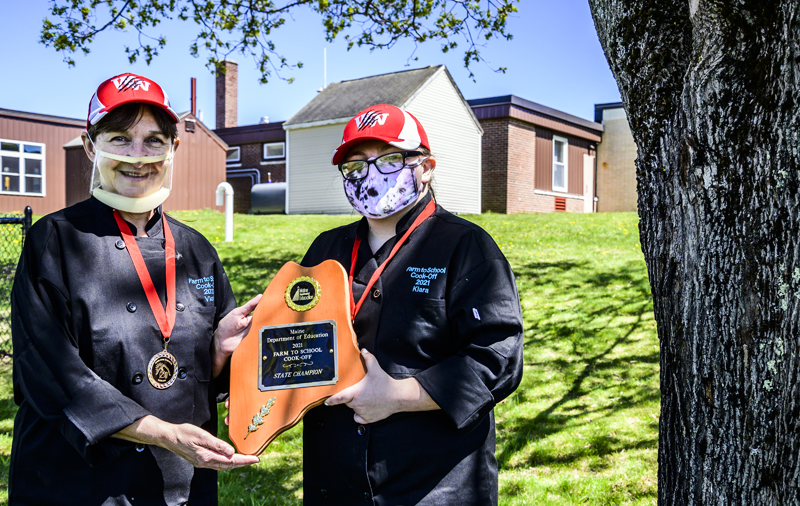 “We’re pretty proud of it,” she said of the fish. “The staff says it’s better than at a restaurant.”

Dill and Luce spent the drive to August fine-tuning their plan for the competition. “Get the crisp in the oven first — here’s the temperature. It comes out and the oven goes to 400 for the parsnips and fish. Kiara was in charge of the oven. She did a great job,” Dill said.

Dill thought she could get ahead of the game by getting the parsnips in the oven during the breakfast prep time, so she turned the oven on high and put them in. She said the parsnips got “pretty crispy” as they made their breakfast presentation. She quickly peeled up more for a second batch. “They weren’t as crispy as I wanted,” she said. But they were done. And not burnt. 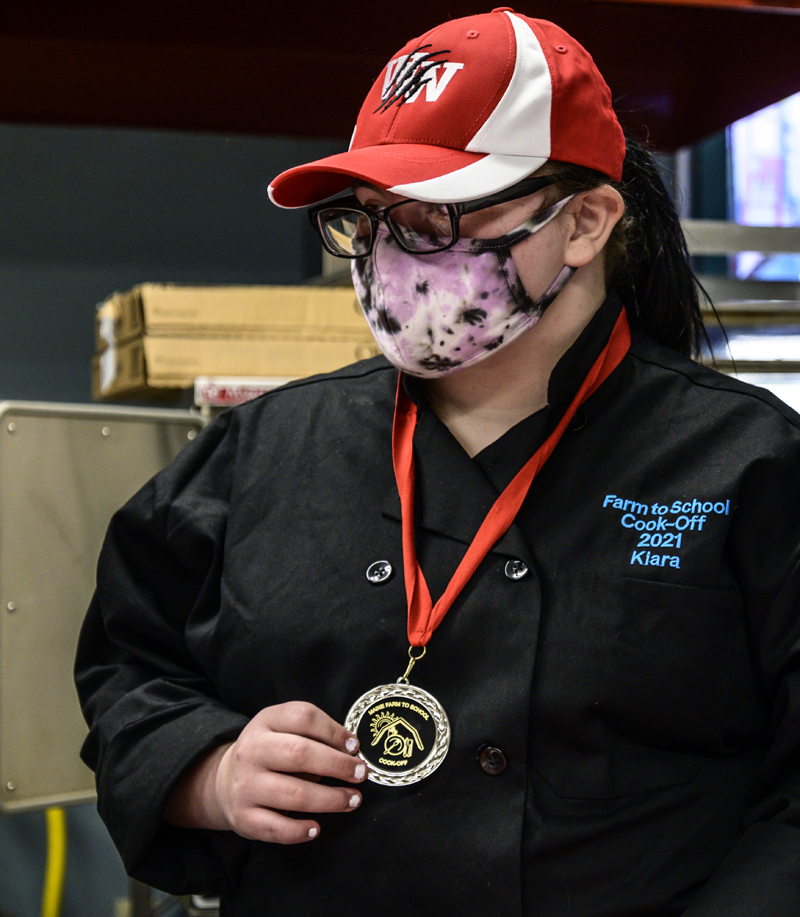 Kiara Luce displays her Farm to School Cook-off medal in Whitefield on Friday, May 7. Luce was the student half of Whitefield’s state championship team. (Bisi Cameron Yee photo)

“The fish came out perfect and the apple crisp was awesome,” Dill said. But she did forget a wedge of lemon to garnish the fish.

Luce said she was excited to participate in the cook-off. She said the judges sat at a table to observe, but also came up to the stations to talk to the cooks. Luce said they asked questions about what she was making, how many times she had made it, and where the ingredients were from.

Luce said she was able to keep working through their questions to finish the meals on time. She said breakfast got done a little early and lunch came out right on the buzzer.

Dill said, “All the judges said Kiara did very well when they were watching and taking pictures.”

“I was focused on the food,” Luce said.

Dill said the prep tables were smaller than they were used to and it was “tight quarters” in the kitchen.

“They were amazed we were using reusable to-go dishes,” Dill said. The compartmentalized plastic containers have snap-tight lids, are 100% dishwasher safe, and don’t degrade in the warmer while keeping food hot.

Dill said that people admired the containers and were picking them up to inspect them as they were preparing to plate their dishes.

“I was anxious, but it’s a kitchen and they all basically work the same. I know things can fall apart at the last minute,” Dill said. “But Kiara was cool as a cucumber.”

Luce handed the dishes to the judges, talking about what she made and the local ingredients she used.

Judging was based on a number of factors, including how many local ingredients and U.S. Department of Agriculture commodities were used. Additional considerations, such as taste, creativity, presentation, food safety, and sanitation, as well as the feasibility of preparing and serving the meals in a scaled-up school environment, were taken into account.

The competition was close, but the safe handling of the fish, the fact their recipes had proven feasibility in a school setting, the innovative presentation in the reusable containers, and the number of local ingredients and commodities used tipped the scale in Whitefield’s favor. 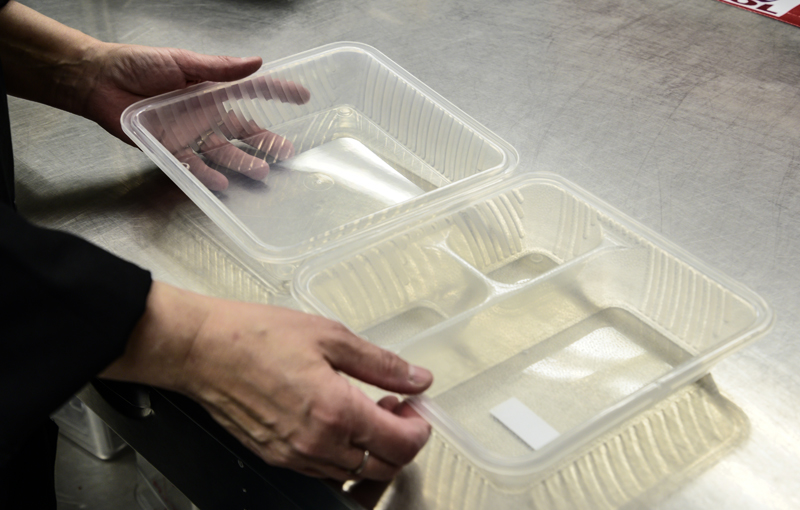 The judges praised the presentation and the extra crunch of corn in the breakfast burrito.

And they commented specifically on Luce’s demeanor. “You seemed very calm when you were cooking,” said Martha Poliquin, one of the judges. “Your intensity and care were a joy to watch.”

Both Luce and Dill received monogrammed chef’s coats and medals, and the school won a trophy to commemorate the win. But Principal Mark Deblois said it would not be kept in the school’s trophy case; he wants it above the kitchen’s serving line, where it can be seen every day with a picture of the championship team below.

“She wasn’t even nervous. She did so good. You weren’t nervous at all, were you, Kiara?” Dill said.