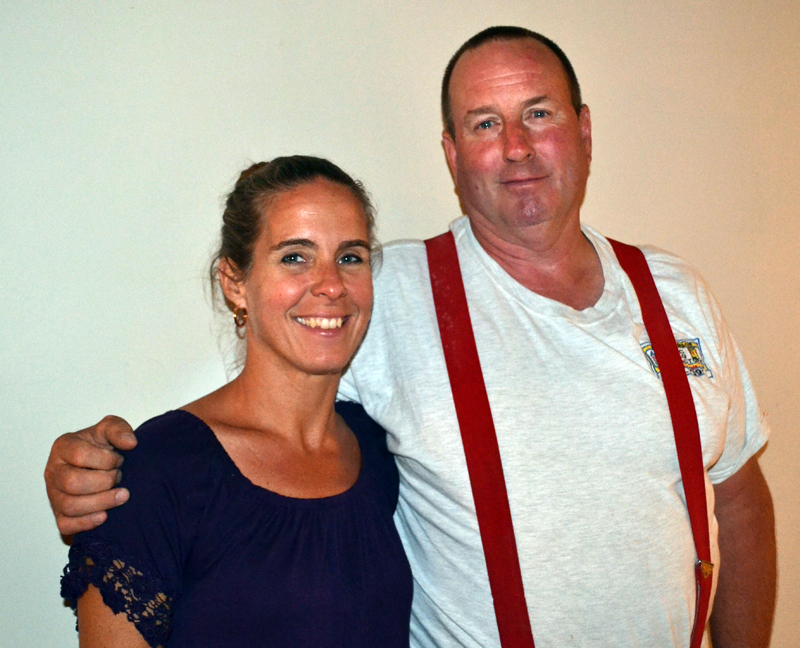 Melanie and John Pagurko, of Whitefield, pose for a photo in the home their neighbors provided after the Pagurkos lost their home in a fire Sept. 3. (Abigail Adams photo)

The Pagurkos, of Whitefield, have been through bankruptcy, injuries from a car accident, physical illness, and an emotional search for appropriate services for their son’s autism. “We used to say, ‘It could be worse – our house could burn down,’” John Pagurko said.

In the early hours of Sept. 3, the Pagurkos’ house at 571 Townhouse Road burned down. The Pagurkos did not have homeowners insurance. “But this isn’t even close to the worst thing we’ve been through,” John Pagurko said. “This is an inconvenience.”

Due to the proper placement of working smoke alarms, John and Melanie Pagurko and their four daughters, Anna, Calista, Shae-Lynn, and Christina, made it safely out of the house. Due to an outpouring of support from the community, the Pagurkos have a temporary place to live, just down the street from their property, food, and clothes that fit.

“We are getting so much support right now. People are coming out of the woodwork. It’s 90 percent of the reason why we’re functioning so well,” Melanie said. “There are no words to express the gratitude we feel to the community. How do we let people know how grateful we are?”

While the Pagurkos lost their house to the fire, a nearby structure with construction tools and the materials to operate Big Daddy’s Farm, the pig farm on their property, was saved. John Pagurko credits the response of area fire departments for saving the building. “I can still feed the pigs every day,” he said.

If the smoke alarms had not woken John and Melanie up when the fire started at about 4:15 a.m., their oldest daughter, Anna, would not have made it out of the house alive, John Pagurko said.

The fire, which originated in the electrical wiring behind the dryer, was burning through the wall underneath her bedroom. “All of us would have been gone,” Melanie Pagurko said. “There are so many ways it could have been so much worse. We’re counting our blessings.”

Since moving to Whitefield 15 years ago, the Pagurkos have been through hard times. John Pagurko previously worked in construction and the family lost everything to bankruptcy in 2007. He was also injured in a five-car pile-up on the Donald E. Davey Bridge between Edgecomb and Wiscasset in 2009.

The chain-reaction accident, which snarled Route 1 traffic for more than four hours, began when a tractor-trailer rear-ended a Volvo, causing it to swerve into the opposite lane of traffic, where it collided with John Pagurko’s truck. 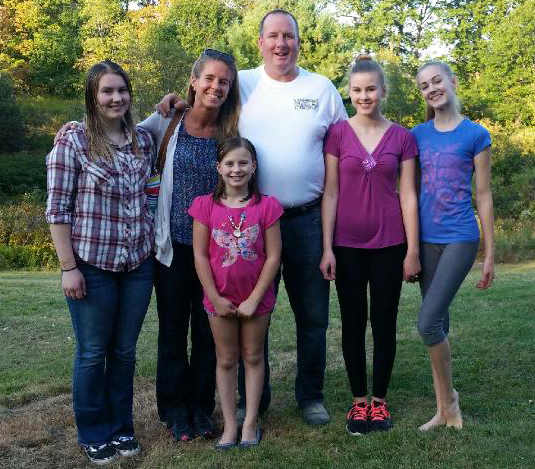 John Pagurko said he has never been litigious and the insurance companies took advantage of him and did not properly compensate him for the accident. The injuries set him and his family back.

Another challenge was Anna’s diagnosis with Type 1 diabetes and celiac disease. “We’ve been through so many things in such a short amount of time,” Melanie Pagurko said. The most difficult thing the family has been through, however, has been finding services for Benaiah, their oldest son.

“The hardest part about it was that I felt so alone,” Melanie Pagurko said. Benaiah has autism and, as he grew up, he began to act out in dangerous ways, she said. He is smart and strong, but  does not understand why certain behaviors are wrong or know how to communicate, she said.

Benaiah is well-known to emergency responders in the area because he would often run away, his parents said. He has an uncanny ability to find a crack in a structure and tear it down, John Pagurko said.

During one of the many times Benaiah was in a seclusion room in a hospital, he found one loose string in the carpet lining the floor and walls and unraveled the whole thing. “When we came in to visit, I thought they were doing renovations,” John Pagurko said.

The family went through a hamster wheel of crises, hospital placements, and social-service organizations. Nothing worked, Benaiah’s behavior escalated, and the only treatment he was provided was drugs and hospitalizations, the Pagurkos said.

Then Benaiah was placed at the Judge Rotenberg Educational Center in Canton, Mass., a subject of recent media attention due to its use of aversion shock therapy, a controversial treatment for behavioral disorders.

The Judge Rotenberg Educational Center was the only facility in the country that would take Benaiah in, his father said. He is now happy, healthy, and learning, his mother said. The Pagurkos had asked other service providers to teach Benaiah how to type, but none did until Judge Rotenberg.

Benaiah now types up to 100 words per minute. “The Judge Rotenberg Center has done amazing things for Benaiah,” Melanie Pagurko said. “I’m convinced he will have a breakthrough there. With all the typing he’s doing, I’m convinced we will be able to communicate one day.”

For the past six years, the Pagurkos have had to fight to keep Benaiah at the center, which is an out-of-district educational placement, and prevent a transfer back to Maine, where there are no services for him, they said. Six weeks before the fire, the Pagurkos won their battle and secured Benaiah’s place at the Judge Rotenberg Center for the foreseeable future. 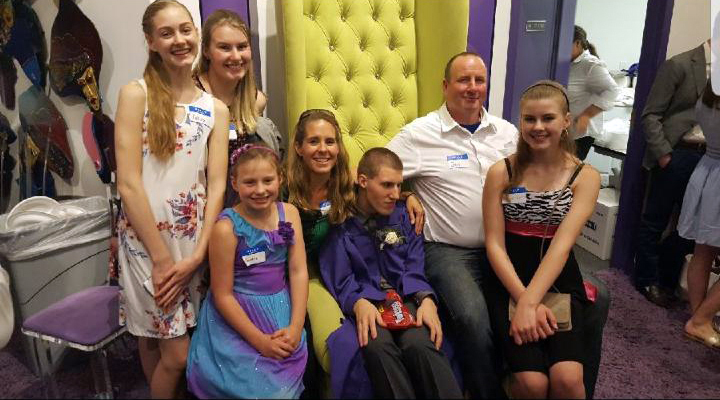 The Pagurko family during a visit to Benaiah Pagurko at the Judge Rotenberg Educational Center in Canton, Mass. From left: Calista, Anna, Christina, Melanie, Benaiah, John, and Shae-Lynn. (Photo courtesy the Pagurko family)

When they received the news, John Pagurko recalled saying to his family, “you know, we’ve had 15 years of hard times, but I think our luck is really starting to change.” Melanie and John Pagurko laughed at the irony of the statement.

John Pagurko lost his homeowners insurance policy because of a glitch in the system, he said. He always paid the insurance policy up front at the beginning of the year. Mid-year, his insurance company sent him an additional bill for about $75.

“We’re still just rejoicing about our son” and that everyone made it out of the fire alive, she said. The past years have been hard on their family, especially their daughters, who took a backseat to the struggles with Benaiah, their parents said. 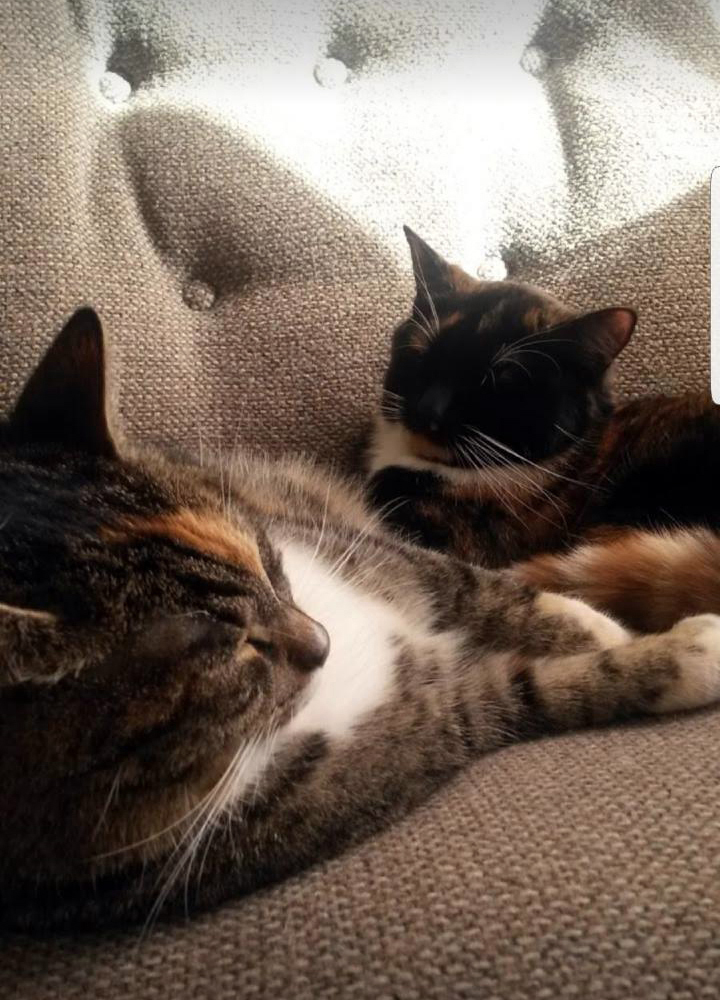 Mittens and Cuddles, the Pagurkos cats, have been missing since the fire at their home early Sept. 3. The family has been asking neighbors to keep an eye out and let the Pagurkos know if they spot the cats. (Photo courtesy the Pagurko family)

For their daughters, the most tragic part of the fire is not knowing what happened to their two cats, Mittens and Cuddles. It is not known whether the cats made it out of the house the morning of the fire. Shea-Lynn Pagurko is asking neighbors to keep an eye out and let the family know if someone finds them.

The future is still uncertain and it is not clear if rebuilding will be feasible, John Pagurko said. The Amish families in Whitefield have offered to mill lumber for the family at cost and the offers to help rebuild are pouring in.

“It’s overwhelming, the outpouring of support from neighbors I haven’t even met yet,” John Pagurko said. “The community spirit – how do you thank everyone?”

If there is any message from the fire, it is to ensure there are working smoke detectors properly placed in every home, Melanie Pagurko said.

If the fire alarms had not been where they were, near the dryer and the bedrooms, the Pagurkos would not have woken up, they said. “This is about our gratitude and the importance of smoke detectors,” Melanie Pagurko said.

A fundraiser for the Pagurko family will take place Friday, Sept. 29, from 5:30-9 p.m. at the Lakehurst Lodge, 30 Lakehurst Lane, Damariscotta. Online fundraisers have also been established to benefit the Pagurkos. To donate, go to either Help the Pagurko Family or to Pagurko House Fire Fund at gofundme.com.