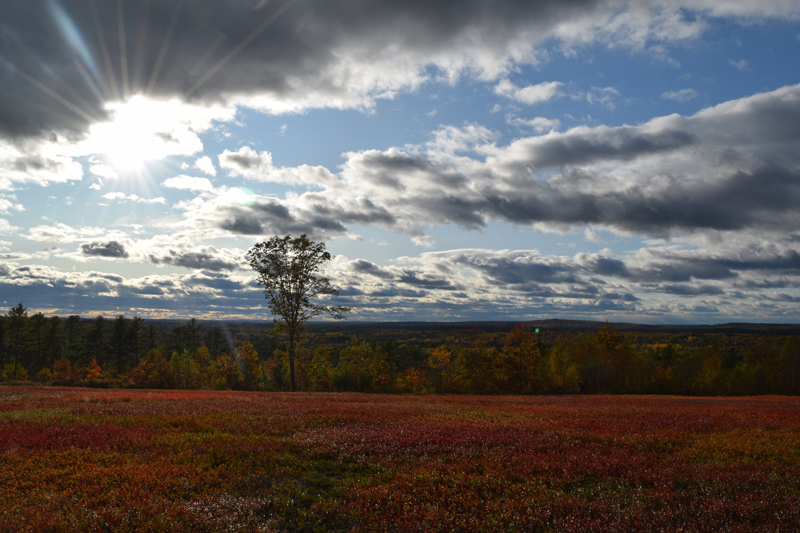 A sunny view of the wild blueberry field at Bluefields Farm in Whitefield. (Jessica Clifford photo)

Bluefields Farm, of Whitefield, will receive a conservation award next month for practices that include a successful initiative to attract wild bees and other pollinators to its blueberry fields.

The farmers, Tony and Marianne Marple, attribute their 2018 harvest of 184,000 pounds of wild blueberries to a change in conservation practices.

The Marples do most of the work by themselves on the beautifully manicured farm, which consists of a commercial wild blueberry field, a managed woodlot, an apple orchard, a pumpkin patch, a vegetable garden, and trails. The Marples live on the property.

The Marples started out with 15 acres in 1984 and have since pieced land together to amass 220 acres.

“I always wanted to live in northern New England, and one day I picked up the paper and saw a job at MaineGeneral as CFO, in 1984, and took the job,” Tony Marple said. At the time, the facility was the Kennebec Valley Medical Center.

Marianne Marple did not have a farming background either. She was a special education teacher.

“We wanted to live like this,” she said. “We had a garden and unexpectedly were able to get the blueberry field, so we found out about that. It’s kind of all unfolded.”

The Marples bought their 30-acre blueberry field about 20 years ago.

“Initially we didn’t know anything about blueberries, so (the Natural Resources Conservation Service) came out and said, ‘This is how you do it,’” Marianne Marple said. 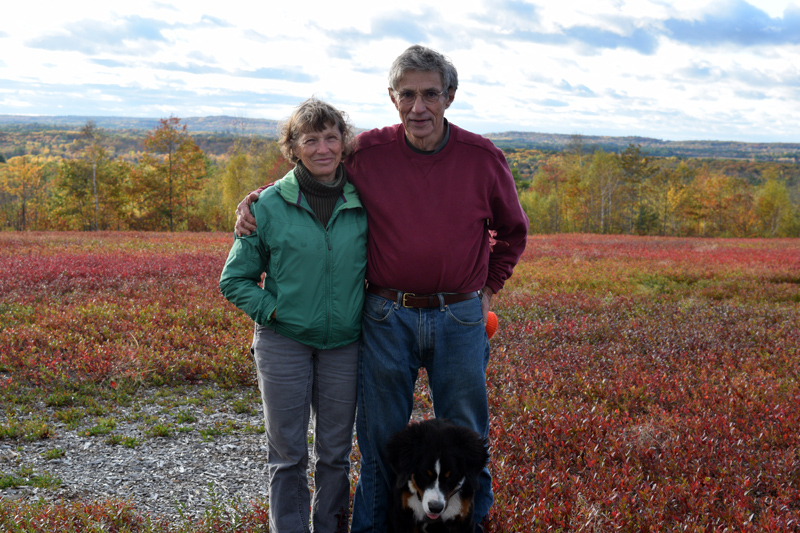 Marianne and Tony Marple with their dog, Max, in their blueberry field. (Jessica Clifford photo)

The Natural Resources Conservation Service is an agency of the U.S. Department of Agriculture that provides technical assistance to farmers and other private landowners and land managers.

Over the years, the Marple family has received multiple grants from the agency. However, Tony Marple said, “The big value is the education you get.” They have worked with the agency for around 15-20 years.

For example, the Marples created a gradual transition from field to forest by leaving various levels of vegetation at the edge. This practice is known as edge feathering.

“In addition to taking advantage of government programs to promote conservation practices on their farm, they have also done a lot on their own,” Hildy Ellis, a program manager at Knox-Lincoln Soil and Water Conservation District, said.

Ellis said the district looked at the Marples’ long-standing work with the Natural Resources Conservation Service and their efforts to seek advice from private consultants to improve the wildlife habitat and biodiversity on their farm. 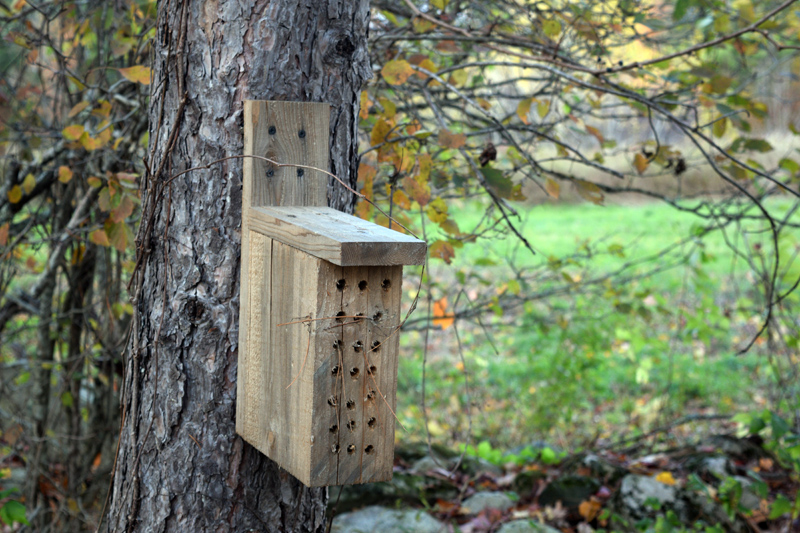 Tony Marple believes an article he wrote for Whitefield News, the town’s free monthly newsletter, was the catalyst in winning the award.

“That’s another thing that we look for, people who are willing to share their knowledge and let people know, ‘Hey, I’m doing this, and you can do it too,’” Ellis said.

The article describes how the couple started to provide more food and housing to attract more wild pollinators, as strong pollination increases the number and size of berries.

Blueberry farmers raise their own bees or rent hives to pollinate their crops.

The past standard has been to have three hives per acre. For the Marples’ 30-acre blueberry field, this would amount to 90 hives. They used to rent 80.

“The wild bees we are talking about are the native bees that live here and are often very small,” Marianne Marple said. “You might think they’re flies. You don’t recognize them at first as bees until you really start to look.”

“That’s the population we tried to increase, so we could rely on them also as pollinators, not just the commercially purchased honeybees,” she said. 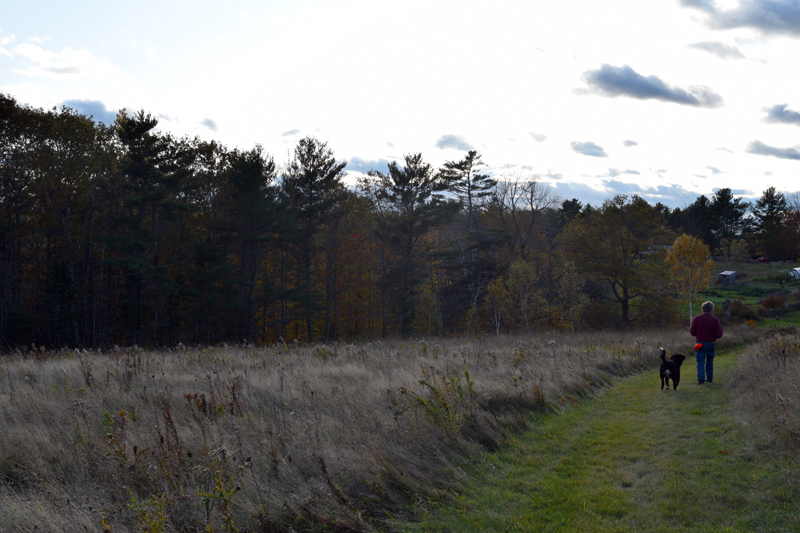 Tony Marple and Max walk back toward the Marple residence on a trail at Bluefields Farm in Whitefield. (Jessica Clifford photo)

Wild bees nest in the ground, in cracks or holes of dead trees, and other sites.

Tony Marple built wild bee boxes for nesting and attached them to trees, which Ellis noted as one of the farm’s exemplary conservation practices. He drilled multiple 5-inch-deep holes in the boxes for the bees to live in, and mounted the boxes 3-5 feet off the ground.

The Marples cleared the area around native pollinating shrubs on the perimeters of their fields and woodlots so the shrubs could thrive.

On fields other than the blueberry fields, the farm mows every other year and waits until October to do that mowing. This practice promotes wild bees and wildflower growth. It protects bobolinks and meadowlarks, grassland bird species; and monarch butterflies, which are considered iconic pollinators.

The Marples attribute this success to the wild bees. 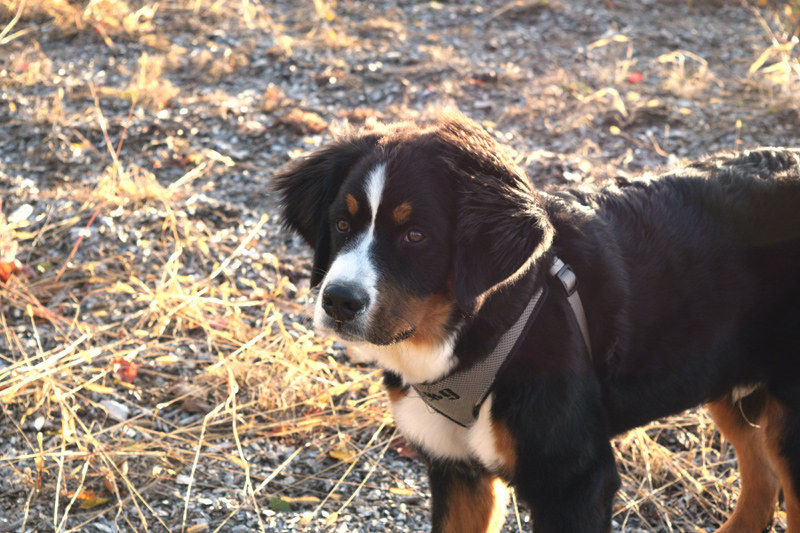 “We had our best crop ever, with that many fewer rented honeybees, so that makes you conclude that it’s probably the wild bees that he’s encouraged through all his practices that filled the gap and even went further than that,” Marianne Marple said.

Tony Marple was surprised when he discovered Bluefields was the Conservation Farm of 2019.

Marianne Marple was excited her husband was recognized. In 2003, the district named her Conservationist of the Year for using a grant from the Natural Resources Conservation Service to stop erosion in their blueberry field and promote growth, as well as to start integrated pest management.

“I’m happy because this was all Tony’s project – the bee thing was all his project – and I’m really pleased he’s got the recognition for this,” she said.

Both will attend the Knox-Lincoln Soil and Water Conservation District’s 72nd annual awards banquet Nov. 6 at Wavus Camp in Jefferson.

Other awards given this year will be for distinguished professional service, excellence in forestry practices, and volunteer of the year.