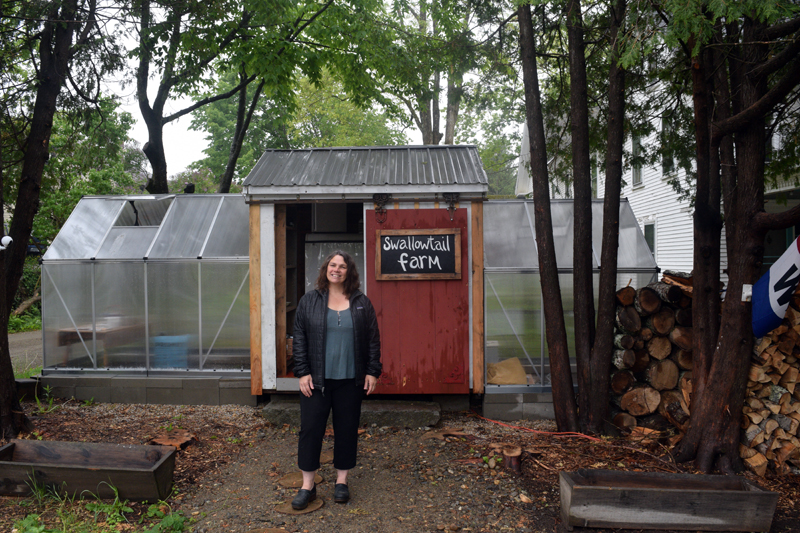 Lauren Pignatello stands in front of the recently rebuilt farm stand at Swallowtail Farm and Creamery in the Whitefield village of Coopers Mills. Pignatello, who runs the farm with her husband, Sean, and her seven children, will appear in an upcoming episode of the Gordon Ramsay series Uncharted.” (Nate Poole photo)

While Swallowtail Farm and Creamery in the Whitefield village of Coopers Mills village has received recognition for its dairy products, it will soon be introduced to a whole new audience by none other than Gordon Ramsay, a Michelin star chef known for television shows including “MasterChef” and “Hell’s Kitchen.”

Lauren Pignatello runs the farm with her husband Sean and their seven children and is also the founder of the Portland and Brunswick winter farmers markets, which give farmers a place to sell their food during the offseason.

In the dairy business going on 12 years, Swallowtail has built up a loyal clientele and won the American Cheese Society Award for yogurt, Greek yogurt, and cheese in 2015.

Last summer, Pignatello received a call from a producer who told her that they were filming a show called “Uncharted” with Gordon Ramsay and asked her if they could do a segment about making butter on her farm.

Pignatello said she had heard Ramsay’s name, but did not know anything about him. Nonetheless, she was flattered to see that her farm’s reputation had reached into the realm of television.

“We make such tiny amounts of butter so it’s funny, because we’re a tiny creamery,” Pignatello said.

Ramsay came to the farm in September with a crew of what Pignatello said must have been more than 50 people in tow, blocking off the street in front of the farm for four hours to film.

“I ‘taught’ Gordon Ramsay how to make butter,” Pignatello said with the use of air quotes. “He was lovely and wonderful and really funny.”

At the end of the filming, Ramsay held a competition dinner with Melissa Kelly, a two-time James Beard award-winning chef and owner of Primo in Rockland, to see if he could convince the locals who he did segments with, including Pignatello, to declare him a Mainer.

The Maine episode of “Uncharted” will air at 9 p.m. on Sunday, June 13 on the National Geographic channel. Pignatello said that after filming, producers cautioned her to prepare for an influx of business after the episode airs.

“They warned me. You really have to prepare,” Pignatello said.

As a result, Pignatello has a friend revamping Swallowtail’s website, where customers can purchase the farm’s dairy products, herbs, gift cards, and sign up for classes for skills like herb identification.

In addition to the new website, Pignatello and her family have nearly completed the construction of a new farm stand after their original stand was destroyed in the middle of the night on Feb. 24. It has been three months since the bizarre incident, and it has since been overshadowed by the outstanding community support that followed it.

A day after the incident, Beth Bejcek, of Kennebunkport, started a GoFundMe for the construction of a new stand, which has since raised $29,363.

“It was amazing. People stopping by every day, giving us checks and cash and food and grain for the animals and donating to the GoFundMe,” Pignatello said. “I don’t even know the woman that started it.”

Pignatello is not one to back down in the face of adversity. During the pandemic she and a number of other local farmers started a “farm to trunk” service and brought food all across Maine from Belfast to Peaks Island.

“We moved a lot of food during that lockdown period,” said Pignatello. “We moved probably $10,000 worth of farm food two days a week in deliveries.”

With the funding for their new farm stand, Pignatello and her family have added greenhouses on either side of the new shed in order to expand the fresh vegetables, herbs, and plants they sell.

They also intend to expand their operation into a front parlor in their home and build a patio space with seating outside of it overlooking the old Coopers Mills dam site, which will operate more like a traditionally staffed store or cafe.

With pandemic restrictions lifting and vaccinations rising, Pignatello also plans to start offering various workshops at the farm for skills like herb identification and cheese making in August.

While the grand opening of the farm stand has been a moving date since Pignatello and her family has been kept busy creating products for farmer’s markets and wholesale orders, she plans to hold a grand opening party at the end of June, with an exact date to be announced on the farm’s Facebook page.

For more information, go to swallowtailfarmandcreamery.com or find the farm on Facebook.