Ben Marcus and Taryn Hammer Marcus, with their dog, Olso, stand in front of their hemp fields at Sheepscot General Farm in Whitefield on July 18. The farm will offer a pick-your-own hemp option by appointment this fall. (Evan Houk photo)

Sheepscot General Farm, of Whitefield, will test a new crop this year – and a new way of selling the crop – when it opens a pick-your-own hemp field in September.

Marcus and Hammer Marcus opened their farm and general store in Marcus’ hometown in 2011. In a July 18 interview, they said they would like to see most of their 3-acre hemp crop picked right off the plants and taken home by the end users, even though they have had inquiries from processors who would buy the plant material and likely extract the CBD for use in popular tinctures and concentrates.

Sheepscot’s hemp crop is one of a few in the state to have been certified organic through the Maine Organic Farmers and Gardeners’ Certified Clean Cannabis Program. The U.S. Department of Agriculture does not expect to have federal guidelines in place for federal certification of organic hemp until the fall.

The federal and state governments both define hemp as a cannabis sativa plant with a concentration of less than 0.3% of delta-9-tetrahydrocannabinol, or THC, the psychoactive component in marijuana that makes the user feel high.

Because of the similarity in look, smell, and feel of the CBD-containing hemp plant to the THC-containing varieties of the cannabis plant, Sheepscot General has posted signs stating its plants are legal, licensed hemp.

CBD has seen a massive rise in popularity since the passage of the 2014 U.S. Farm Bill, which essentially allowed states to regulate the cultivation, manufacture, and distribution of the hemp plant and its extracts themselves.

Since then, CBD has been touted by over-zealous advertisers as having the ability to aid ailments from muscle inflammation to anxiety and has come packaged in a variety of forms, like infused foods, beverages, tinctures, and salves.

The National Institute on Drug Abuse states that more rigorous research is needed to evaluate the clinical potential of CBD for specific conditions, but “pre-clinical research (including both cell culture and animal models) has shown CBD to have a range of effects that may be therapeutically useful, including anti-seizure, antioxidant, neuroprotective, anti-inflammatory, analgesic, anti-tumor, anti-psychotic, and anti-anxiety properties.”

“It seems to really work for people … and it doesn’t really seem like it’s a placebo or it’s just a certain type of person it works for. It does seem like it has benefit to a pretty wide range. So that’s the good feeling about having this crop,” Hammer Marcus said.

“Cut out the middleman,” Marcus said of the pick-your-own philosophy’s potential to save customers money and simplify the process for all parties involved.

He said the approach is also more in line with the cannabis plant’s millennia-long history of holistic use among humans as medicine, food, and fiber for making rope.

He said cannabis was a widely used medicine and fiber in the U.S. in the early 1900s.

A May 14 article in The New York Times Magazine, “Can CBD Really Do All That?” told the story of how, in the early 19th century, William Brooke O’Shaughnessy, an Irish doctor working in India, learned about the use of cannabis in Indian medicine.

O’Shaughnessy’s treatises on the plant led to cannabis becoming an important component of British and American physicians’ pharmacopoeia by the late 19th century.

According to the article, Harry Anslinger, a former official at the Bureau of Prohibition, became the head of the Bureau of Narcotics in 1930 and quickly began a campaign to spread claims that cannabis “made people crazy, violent, and prone to criminal behavior.”

The article states that Anslinger’s claims were widely debunked by the medical establishment at the time: “when 30 American Medical Association members were surveyed, starting in 1929, 29 disagreed with claims about the dangers posed by cannabis.” 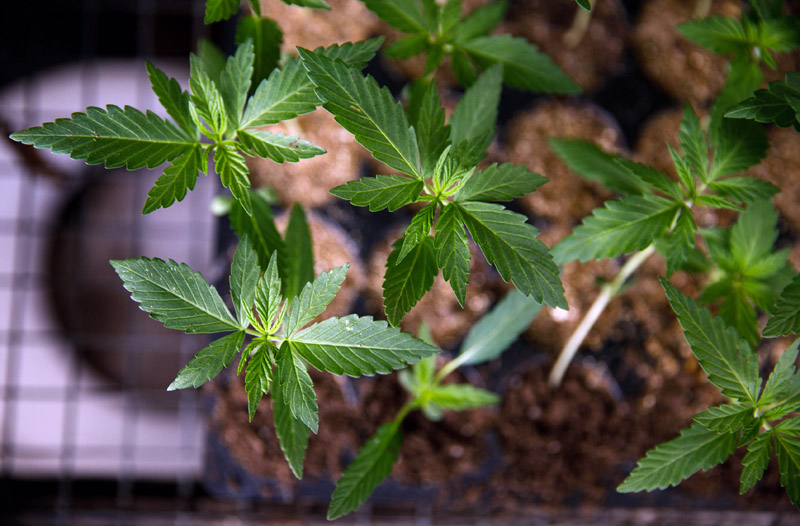 A view from above of an immature hemp plant at Sheepscot General Farm in Whitefield. Hemp is any variety of the cannabis plant with less than 0.3% THC. (Photo courtesy Taryn Hammer Marcus)

However, the hysteria Anslinger whipped up worked, and cannabis was effectively outlawed with the passage of the Marihuana Stamp Act in 1937.

“The prohibition and the reefer madness craze came in and demonized it,” Marcus said.

Hammer Marcus said the Sheepscot General store sells CBD-containing products already, but the pick-your-own hemp option could be a more economical option for customers and less labor-intensive for the business.

“I would like to see people come get fresh-harvested flower, or plant, and make their own (tinctures or salves) and see how easy it is to do … and they’ll save a ton of money if they do it this way,” Marcus said.

He said customers can pick the hemp and take it home to dry it, freeze it, or chop it up and mix it into a tincture, food, or beverage themselves.

Hammer Marcus said the crop presents a relatively low risk because it did not involve a huge investment on their part, unlike some recent large investments by hemp growers in other parts of the state, and it fits into a rotation with the strawberry crop.

Sheepscot General will also add hemp as an option in its community-supported agriculture program. The farm has always offered a CSA program that allows customers to purchase a $200 share at the beginning of a growing season in exchange for a $220 credit and deals on the farm’s multitude of fruits, vegetables, dairy, and eggs.

According to Marcus and Hammer Marcus, CSA revenue helps cover the upfront cost of setting up and planting all the farm’s crops for the year.

Sheepscot General’s website, sheepscotgeneral.com, states that the pick-your-own-hemp option will be available by appointment in September and October. The site also offers links to more information about hemp and CBD.

The hemp crop is currently making a comeback in Maine, where historical reports say it was a commonplace crop in Colonial times.

This year, 167 farmers are licensed to grow 2,706 acres of industrial hemp in the state, according to the Maine Department of Agriculture, Conservation, and Forestry.

By comparison, in 2016, two farmers grew a total of a quarter-acre of licensed hemp.

Since the Maine Legislature passed a measure approving hemp as a commercial crop in 2015, its cultivation has steadily increased in the state.

Gary Fish, state horticulturist for the Department of Agriculture, Conservation, and Forestry, is in charge of hemp licensing. According to Fish, in addition to Sheepscot General, two licensed hemp growers are registered in Lincoln County.

Christian Bateman, of Waldoboro, and Gale Willauer, of Edgecomb, have licenses to grow hemp. Neither responded to emailed interview requests.

Fish described the licensing process as time-intensive. It involves, among other things, certifying the seeds as containing less than 0.3% THC and testing the plants for THC content shortly before the harvest in September.

For the first time this year, Maine is experimenting with an indoor hemp-growing pilot program. There are 47 applications for 10 licenses, according to Fish. A lottery will determine who receives the licenses.

Fish also said the department is waiting on new direction from the USDA regarding pending changes to federal hemp regulations resulting from the 2018 U.S. Farm Bill, passed last December.

Forty-eight states, including Maine, already allowed hemp cultivation in some form before the 2018 U.S. Farm Bill officially legalized the crop at the federal level.

Fish does not see hemp going anywhere anytime soon, especially after the recent passage of a Maine bill requiring any CBD vendor to source the product from an in-state grower.

As for Marcus at Sheepscot General, he is testing the waters in this first year. He said that as long as the hemp is planted in well-drained soil, it is not a difficult crop to maintain and he is confident he will have a market for it.

“It’s speculation, really. I think for a lot of people it’s speculation,” Hammer Marcus said, referring to the experimental nature of the undertaking and the ever-changing landscape surrounding the cannabis sativa plant.