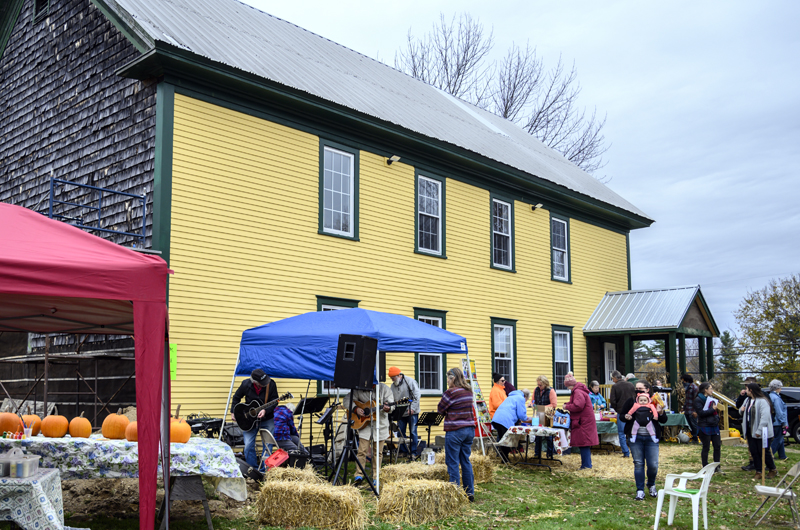 Residents celebrate the season at the Whitefield Library and Community Center Fall Festival in Whitefield on Oct. 23. People came early for music, food, kids activities, and a book sale, despite the chill in the air. (Bisi Cameron Yee photo)

While the general public has yet to see the inside of the renovated Whitefield Library, local families gathered outside of the historic building on Oct. 23 to celebrate fall festivities and show their support for the community project.

The Whitefield Library’s Annual Fall Festival featured live music, food, pumpkin painting, and even goats. While the weather was brisk and cloudy, lead festival organizer and longtime volunteer Jane McMorrow and other library volunteers pulled off the event with a turnout that dwarfed last year’s fall celebration.

Parking was a challenge, so much so that some members of the “Geezer Gang,” a group of retired and dedicated volunteers who helped renovate the library, began to act as de facto valets to consolidate space.

Sue McKeen, president of the Whitefield Library’s Board of Directors, described the event as a picturesque, small town scene, “like the sort of thing that Norman Rockwell would have drawn.”

McKeen saw some families from Windsor and Jefferson at the festival, which is fitting as the Whitefield Library will be a resource not only for its namesake, but also for the surrounding towns.

The Whitefield Library Association raised about $2,000 through the event to support the library. In addition to concessions, calendars featuring picturesque scenes from around Whitefield were available for purchase, of which volunteers sold about 70. The calendars are currently available at the Sheepscot General Store for $10.

“We sold all our food, we sold a nice amount of calendars, I’m really really pleased with this event, and everybody else was too. It was a really nice community event,” McKeen said.

While only in its second year, McKeen believes that the fall festival will only continue to grow, especially once the inside of the library is open to the public.

After operating a summer library out of the former Arlington Grange, the association bought the building atop the hill on Grand Army Road in 2019.

The yellow building was constructed in 1884, and served as a school and town hub for many years. Throughout the pandemic, the “Geezer Gang” and other volunteers worked tirelessly to gut the building and renovate it into a year-round library and community center.

With the majority of the work on the first floor complete, the association’s board expected to receive a permit from the Maine Fire Marshal’s Office to open before the festival, as they submitted it about 10 weeks prior.

McKeen said that she hopes the association will receive the permit by the end of November.

Once they can finally open the building, Joslyn said they are going to try to keep the library operating through the winter for the first time.

This winter at the library will be a venture into the unknown for the volunteers, as they test their heating and insulation renovations against a Maine winter.

“We won’t leave that heat going for five days, because, well, we couldn’t afford it,” McKeen said with a chuckle. “But we don’t know what that’s going to look like either, we just don’t know. It’s never been open all winter.”

Other requirements to meet this goal include opening the library for at least 12 hours a week and hiring at least one librarian full time or on a stipend, two goalposts that Joslyn believes are well in reach.

Once the permit from the fire marshal comes through, there will still be plenty of work left to do for the volunteers, as they begin their work on the second floor of the building to turn it into an event space and community center that will be available to rent.

Volunteers also recently installed a metal roof on their new storage shed and will begin insulating the perimeter of the library’s granite foundation.

Joslyn said she hopes the additional insulation will mitigate the associations’ heating concerns over the winter.

Volunteers will also attempt to re-shingle the backside of the library and possibly have a contractor install an emergency stairway from the second floor if the fire marshal’s office grants their permit.

With every book catalogued by the association’s book committee, Joslyn said the library will be ready to hit the ground running the moment they are able to open.