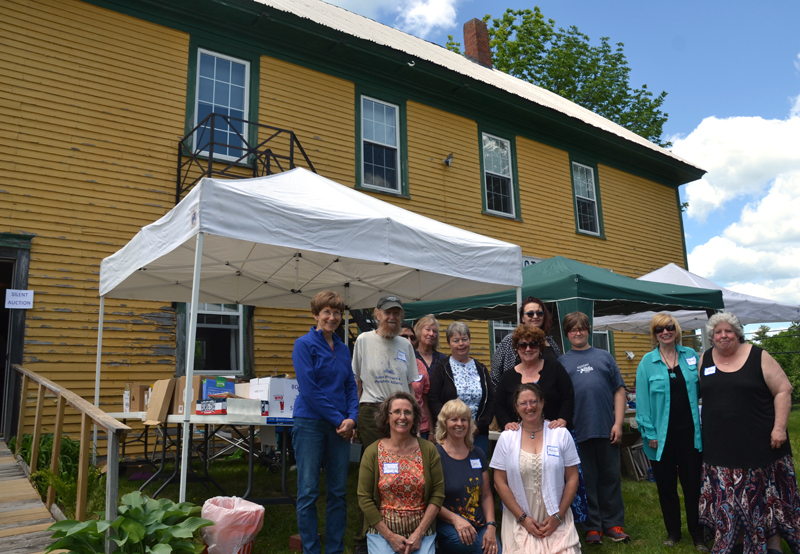 Whitefield Library volunteers stand in front of the Arlington Grange, which houses the library, during an open house June 9. The volunteers are researching the possibility of buying the hall. (Maia Zewert photo, LCN file)

The volunteers behind the Whitefield Library, at the Arlington Grange in North Whitefield, are researching the possibility of buying the building from the Grange.

The volunteers hope to give the library a permanent home, and the purchase would enable them to expand the library’s hours and services.

The library, inspired by a March 2016 letter from a Whitefield Elementary School second-grader, opened its doors in July 2017.

The building dates to the late 1800s and became the Arlington Grange in 1914, according to Debbie Rogers, the Grange’s secretary and a library volunteer. The building has a “rich history,” Rogers said, and the original plan for the building was for a free high school and library.

It was a “natural fit,” then, for the building to house the Whitefield Library when the opportunity arose, Rogers said.

“This is what it was originally planned for, but it never came to fruition,” Rogers said. “It’s nice that it’s happened now.”

The library is open from 10 a.m. to noon every Wednesday and Saturday throughout the summer with a story time for children at 11 a.m. Saturday. While a good number of people visit the library when it’s open, the volunteers would like to extend the hours.

“We have a lot of people come in, but it’s not nearly long enough for the library to be open,” Sue McKeen, president of the Whitefield Library Association, said during the June 9 open house. “We’d like to have longer hours and more availability for people.”

At the same time, the Arlington Grange has been faced with declining membership.

“The Grange is diminishing, and has been for years,” Rogers said. “Our older members are passing away and we haven’t had new members to replace them.”

With this in mind, the library volunteers formed a committee to research the possible purchase of the Arlington Grange building as a permanent home for the library.

The six-member Grange Hall Acquisition Committee has only met once and is in the early stages of research, according to Whitefield Library Association Vice President Cheryle Joslyn.

“This next phase isn’t something we thought would be here so fast, but it just fell on our plate,” Joslyn said. “That is reason enough for us to seriously look into it.”

“Whitefield really only has two historic buildings of this nature left – the Grange and the King Mills (Union) Hall,” Rogers said. “Saving this building would really help the community.”

By owning the building, the library would be able to expand its hours of operation and reconfigure the space on the first floor to best fit the library’s needs, McKeen said. In addition, the volunteers hope to transform the second floor into a community arts space.

“We certainly have a community of creative, artistic people, but there isn’t really a place for these things to take place,” McKeen said. “And in order to keep a large building like this going, we would need an income stream, and having that space available for rent would help.”

The Grange Hall Acquisition Committee “has a lot of work to do” before the volunteers consider raising money to purchase the building, which would need to be appraised, Joslyn said.

“Part of the feasibility study is figuring out how we would be able to keep this building running,” Joslyn said. “We don’t want to jump into things and then five years later have it not work out. We need a long-term plan.”

While the development of that plan is underway, the effort has gained support in the community, according to McKeen.

“Everyone I’ve talked to has said they want to see something like this in Whitefield,” McKeen said. “It’s a great fit, and it’s what we want to be.”