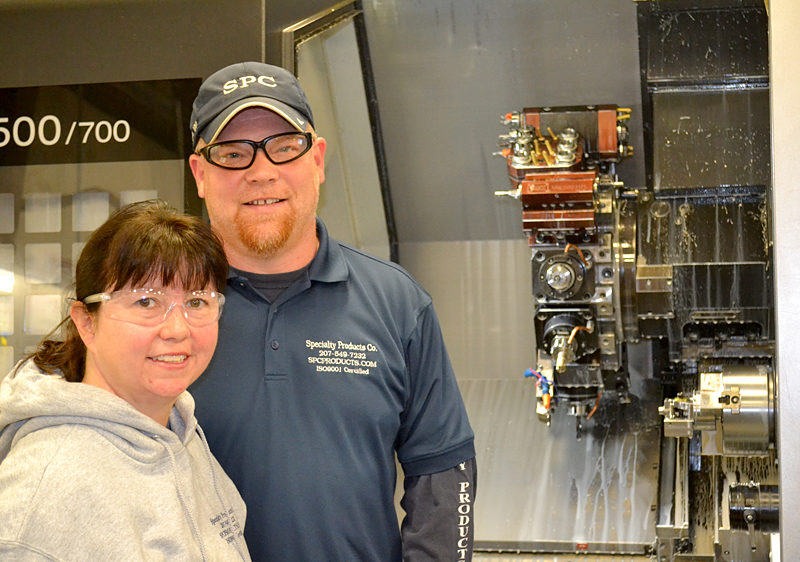 As a 17-year-old, Mike Cuthbertson got an after-school job sweeping the floors of William Smith Enterprises, a manufacturing company in Jefferson. He is now owner, with wife Paula, of Specialty Products Co., a precision machine parts company that grew from the garage of his Whitefield home to a manufacturer of products that companies in the aerospace, medical, and industrial fields rely on.

In 2015, Specialty Products Co. took over the accounts, employees, and building of Mike Cuthbertson’s former employer, where he learned the tools of the trade of producing precision machine parts essential to the proper functioning of equipment.

The Cuthbertsons initially planned to expand their facility slowly and in phases. Those plans changed, and, in mid-November, the Cuthbertsons received Whitefield Planning Board approval to add 10,000 additional square feet to their building.

They plan to complete construction of the full 15,000-square-foot expansion in about a year, they said. With the Specialty Products Co. manufacturing facility in Whitefield currently working at full capacity, the cost of operating two buildings, and the potential for increased construction costs in the future, completing the full expansion now made sense, they said.

As a young man working on the floor of William Smith Enterprises, Mike Cuthbertson listened, asked a lot of questions, and slowly worked his way up the ranks, he said. At 24 years old, he was given the opportunity to travel to Costa Rica and help set up a machine shop there, he said.

For the next three years, he learned the corporate end of the precision machine parts industry as he worked to establish a plant in another country. During that time frame, he noticed a lot of Maine’s manufacturing jobs were disappearing.

That was when he decided to open his own manufacturing company in Maine. In 2000, Specialty Products Co. was launched from the Cuthbertsons’ garage, a feat achieved through the support and guidance of others in the tight-knit precision machine parts industry, he said.

The parts Specialty Products Co. produces are components of aircraft, firearms, and neuroscience equipment, other medical equipment, and other items, Mike Cuthbertson said.

“There’s no room for error” in the pieces they produce, he said.

“Precise is the right word” for the machine parts, Paula Cuthbertson said. “It is precision from the start to the finish.”

The precision machine parts industry, however, is directly affected by the global economy. Specialty Products Co. took a hit in 2001, when the airline industry experienced an economic downturn, and again in 2008 with the global financial crisis.

Despite the difficulties, the Cuthbertsons bought their current location on Route 17 in 2006 and developed plans for expansion soon after moving in, plans they have since expanded.

“We got up and went to work every day,” Mike Cuthbertson said. “We kept going forward.”

The company employs 25-30 people, a group the Cuthbertsons call “Team SPC,” a slogan printed on company sweatshirts. “We’re a team here,” Mike Cuthbertson said. The staff is equally excited about the expansion of the facility, he said.

“We have a great workforce,” Paula Cuthbertson said, noting that the skilled labor required to operate the company’s machines is not easy to find. “You need to be able to take a print and program a machine to make that (part),” she said. “Everything needs to be precise.”

To continue to build their workforce and find young talent, the Cuthbertsons initiated a scholarship program that covers the full tuition of area machinist programs for recent high school graduates who work for Specialty Products Co. part-time.

After spending more than half his life in precision machine manufacturing, Mike Cuthbertson remains passionate about the industry and is still excited to see the parts his company makes, he said.

He balked when asked to reflect on the company’s success. “Success is a tough word to define,” he said. “I’m grateful for all the opportunities I’ve had.”