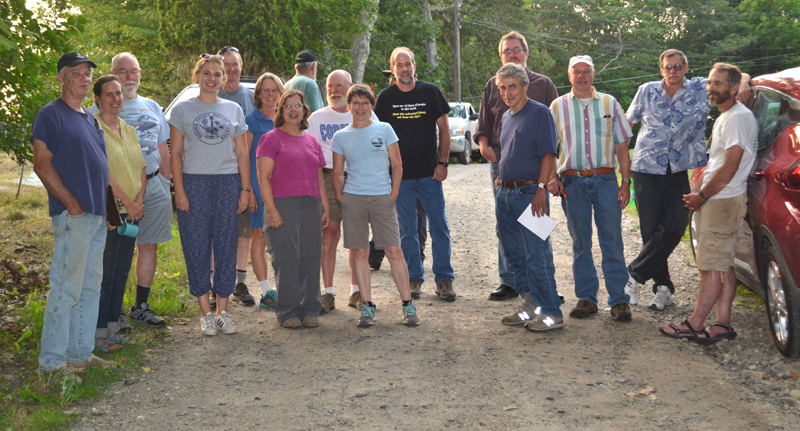 The Whitefield Board of Selectmen, fire chief, road commissioners, roads committee members, and school officials gathered with residents on a narrow section of Hollywood Boulevard on Monday, Aug. 21. The gathering was a first step toward a solution to a problem that has pitted residents of the gravel road against each other.

Each year, a family on Hollywood Boulevard has complained to town officials that the RSU 12 school bus does not travel down the section of the road during the winter.

Whitefield initially marked 32 large oak and pine trees on the road for removal to increase the width of the road and address a safety concern shared by the fire department. But 16 residents of the road signed a letter urging the town to find another solution.

“They’re beautiful old trees,” said Kristen Stone, who lives near some of the trees marked for removal. “I just think it’s a waste of money and an unnecessary investment for the town.”

The removal of the trees would leave large gaps with nothing to screen residents’ properties from the road, residents said. “This seems like a big solution to a small problem,” resident Brian O’Mahoney said. 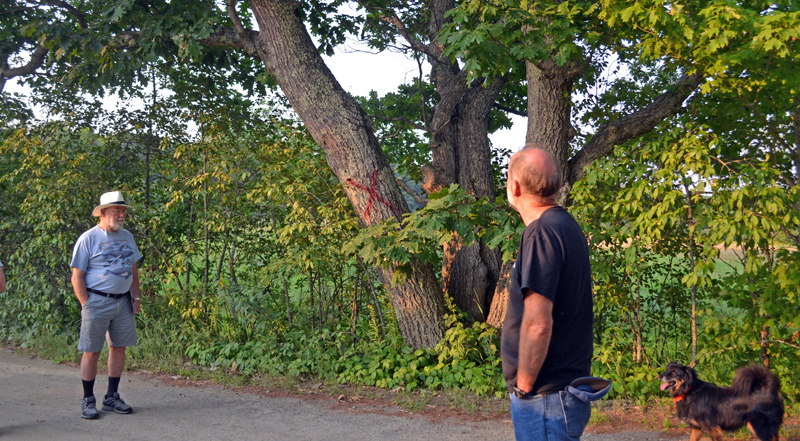 Whitefield Selectman Frank Ober (left) and Hollywood Boulevard resident Philip Yund look at one of the trees marked for removal as part of the town’s plan to widen the road. (Abigail Adams photo)

The group walked the roughly 200 feet of roadway where the majority of trees were marked, examining the road and each tree, and collectively questioning whether the town should remove the tree or consider alternatives. The road commissioner, selectmen, and residents expressed varying opinions about each tree.

The roadway in question measures about 17 feet wide, roads committee member Dennis Merrill said. The standard for town roads is 20 feet. In some areas, the gravel road could be extended in the opposite direction, sparing a tree from removal.

On other sections of the road, the selectmen and the road commissioner were adamant that removal of a tree was the only option. Selectmen were able to narrow the amount of trees marked for removal from the initial 32 to eight or nine as a result of the walk. 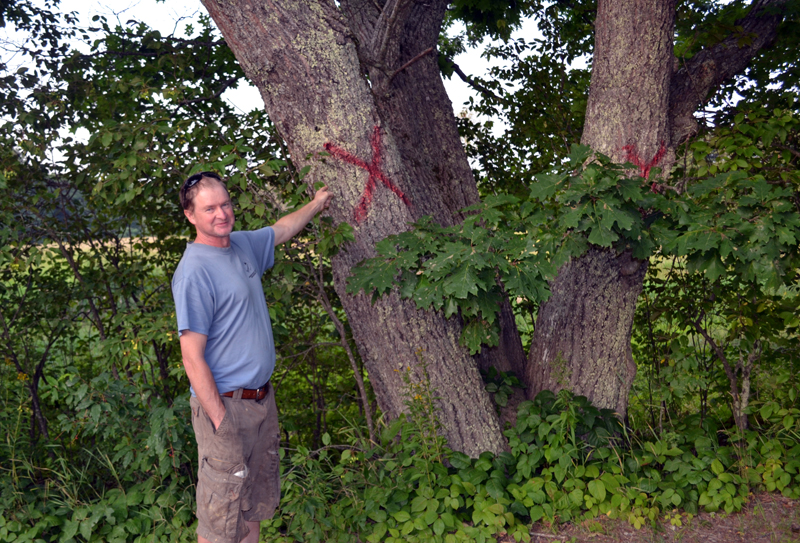 Whitefield resident Steve Gorrill points to one of the trees marked for removal next to his property on Hollywood Boulevard. (Abigail Adams photo)

Brush alongside the road contributes to the problem with the line of sight, Road Commissioner David Boynton said. Brush removal on Hollywood Boulevard was not included in the roadwork plan for 2017-2018, but could be completed this year, Boynton said.

Once the brush is removed, it will be clearer which trees are impacting the line of sight and preventing the plow from clearing snow from the roadway, he said.

Selectmen still need to meet with the town’s plowing contractor and the family whose complaint sparked the plan before making a final decision, board Chair Tony Marple said.

The plan “is still in the talking phase,” Boynton said, as Whitefield was not planning on completing the work on Hollywood Boulevard until next year.