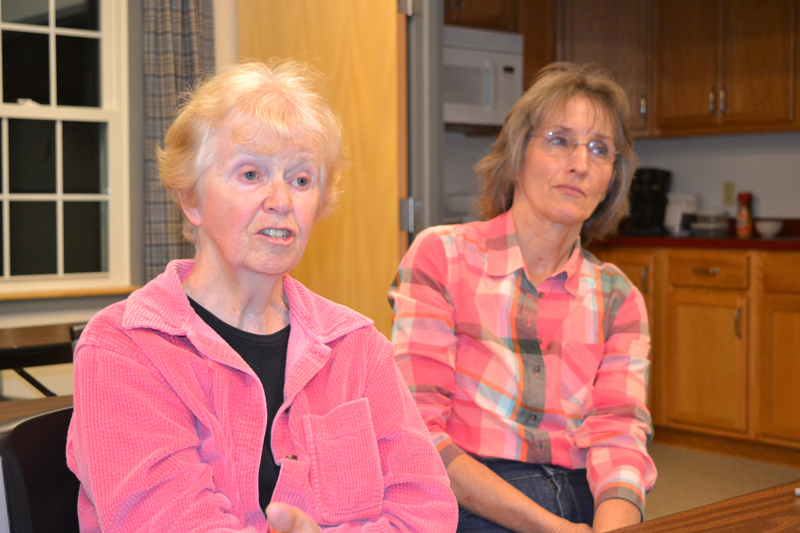 Whitefield residents Libby Harmon (left) and Lucy Martin weigh in during the portion of the Tuesday, Oct. 10 meeting of the Whitefield Board of Selectmen concerning a recent accident involving a motor vehicle and a horse-and-buggy. (Christine LaPado-Breglia photo)

Several members of the public joined the ongoing meeting at the Whitefield fire station shortly before 6:30 p.m., the time stated on the meeting’s agenda for discussion of the crash. Lincoln County Sheriff’s Office Chief Deputy Rand Maker, who had been invited to attend the meeting by Aaron Miller, administrative assistant to the Whitefield Board of Selectmen, arrived at about the same time.

For about 45 minutes, Miller, the five selectmen, Maker, Maine Department of Transportation Traffic Engineer David Allen, Whitefield Fire Chief Scott Higgins, and concerned citizens discussed what might be done to help prevent accidents such as the one on Oct. 4, in which there were no injuries to the occupants of either vehicle or to the horse.

“We didn’t get called to either (crash),” said Higgins, as there were no injuries.

“Fortunately no one was hurt,” said Aaron Miller of the Oct. 4 crash.

Harmon said that Henry Miller, “who had the reins, was going to go on vacation, but (he and his family) moved it up two days because he wasn’t able to work” after the crash.

The requirement is to have “at least one adequate reflector securely attached to the rear” of the buggy, Maker said, adding that the buggy involved in the Oct. 4 incident had “a lamp that they hang, and the back of the carriage was marked in white reflective tape.” He said the accident occurred not at night, but at 10:30 a.m. 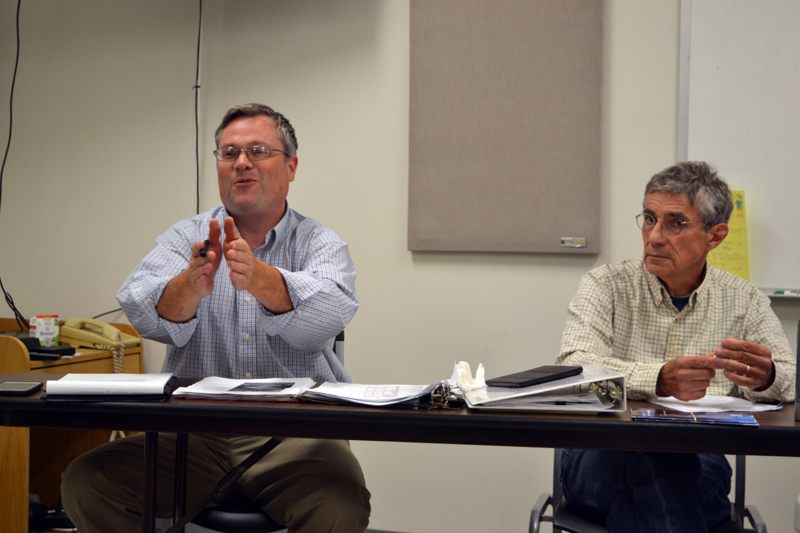 Aaron Miller (left), administrative assistant to the Whitefield Board of Selectmen, discusses possible new ways to alert the public to horse-and-buggy traffic in the area as Selectman Tony Marple looks on. (Christine LaPado-Breglia photo)

“Most buggy incidents take place during the day, and they think it’s based on speed and inattention (of motor-vehicle drivers),” said Whitefield resident Herb Hartman. He said both horse-and-buggy accidents have happened since roads were repaved, possibly making the roads more conducive to speeding.

Aaron Miller said the town has signs announcing the presence of horse-and-buggy drivers “at one end of town and at another end, but nothing in between.” He suggested adding signs that say something to the effect of “horse-drawn traffic next 2 miles” as well as getting the Lincoln County Sheriff’s Office to bring back a movable electronic traffic-control sign it set up earlier this year, shortly after Amish settlers moved to the area.

“These are our neighbors,” Miller said.

“I am a little concerned about what happens when (the horse-and-buggy drivers) go beyond that 2-mile range,” said the DOT’s Allen. “I’ve seen a buggy clean down into Jefferson village.”

Allen suggested that signs reading “next 4 miles” instead of “next 2 miles” would be his preference. He also mentioned the possibility of the DOT installing signs “that provide the driver feedback and record the speeds they’re doing.”

“It would be nice to have the Amish community be part of this conversation as well,” Allen said.

Miller said he invited Amish community members to the meeting, but “they don’t want to be in the spotlight.”

Allen said he understands, but “we need to be in a glass house on this,” meaning there needs to be an open discussion, accessible by the press, about the traffic issue.

Miller suggested “a small meeting” that would include Amish residents of Whitefield. 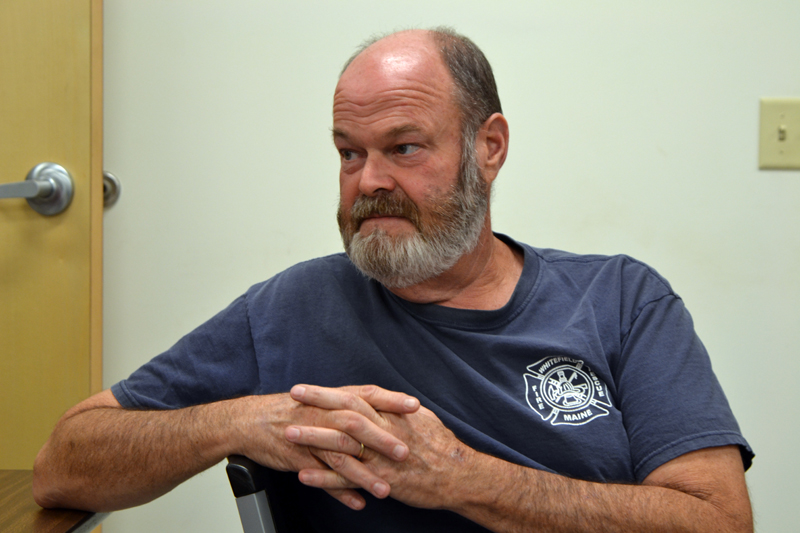 Whitefield Fire Chief Scott Higgins listens to discussion about possible new safety measures regarding horse-and-buggy traffic in Whitefield at the Oct. 10 meeting of the Whitefield Board of Selectmen. (Christine LaPado-Breglia photo)

“You can’t sign enough roads. You don’t know where they’re going to be,” Selectman Frank Ober said of the buggies. “On the Cooper Road, I drive 40 mph. I’m expecting the wagon (buggy).” People often tailgate him and do not watch for the buggies. Such drivers – those who drive too fast and do not pay sufficient attention – pose a potential problem for horse-and-buggy operators, he said.

“The person driving the vehicle (in the Oct. 4 accident) is a local,” said Allen. “They know (the Amish) live here. It wouldn’t have helped in that case if we had a sign every 50 feet.”

“The community as a whole needs to work together,” Maker said. He said he recently reached out to friends in Waldo County, where the town of Unity has had a sizable Amish population for more than seven years and has had a chance to work through similar problems.

“The big complaints they get now are about horse poop in the road. It’s a learning curve,” said Maker.

“The horses are here,” he said. “I think some people have not seen them yet.”

“And they are slow,” said Whitefield Selectman Charlene Donahue. “And I think some people have become immune to the signs.”

The selectmen agreed that an article in the Whitefield Newsletter to raise awareness would be a good idea.

“We can draw attention with the electronic sign. We certainly can try and get more patrols in the area, but we won’t be able to get a police car in Whitefield as often as you want it,” Maker said.

“The risk is always going to be there when you put these buggies on the road,” Donahue said. “We need to talk with the Amish and say, ‘We’re willing to work with you, but we’re not in this situation alone.’”

Marple suggested adding signage to the “major entrances” into Whitefield, “something to make people aware that this is a widespread (Amish) community.”

“’Horse-drawn vehicles here,’ or something like that,” said Donahue.

“Except a bicycle’s only a foot wide,” Sheaffer said.

The public portion of the meeting closed with everyone agreeing that the next steps will be to have the LCSO bring back the electronic sign (“We can have one here tomorrow,” Maker said) and to set up a meeting with the local Amish community to further discuss the matter.

“I would like to see buggy accidents documented regardless of the situation. I’m suggesting that should be part of the conversation,” said Ober.