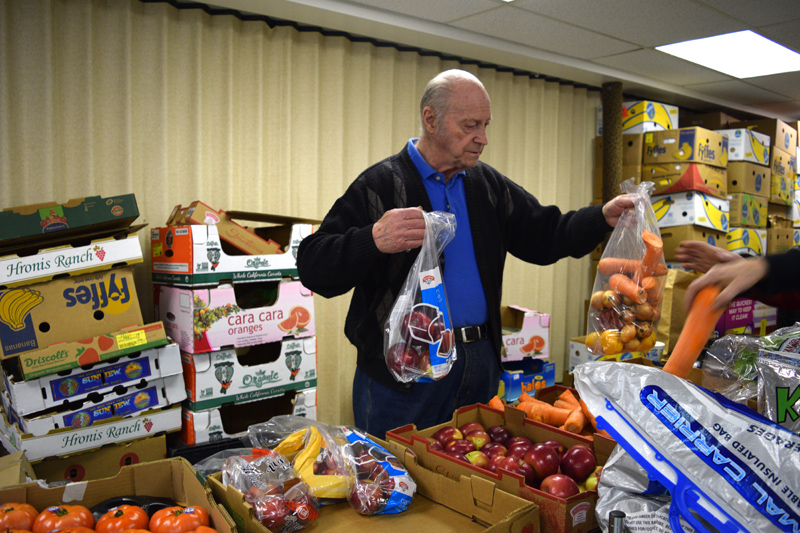 Earl Lemieux hands a bag of carrots and onions to a client at the St. Denis Food Pantry in Whitefield on Friday, March 1. Earl Lemieux and his late wife, Mary Lemieux, started the pantry more than 20 years ago. (Jessica Clifford photo)

The St. Denis Food Pantry in Whitefield is now open two days a month instead of one and offers more choice to the Whitefield and Alna residents it serves.

“We decided to go to a new day because some people can’t make it on Friday because they work, so we thought we’d see if a couple hours on Saturday would make it more convenient … that’s what we’re hoping to do – to reach more families,” volunteer Janet Ober said.

The pantry opened on a Saturday for the first time Feb. 23. Previously, the pantry was open only one day a month.

Earl and Mary Lemieux started the pantry 20 years ago, after they retired. Mary Lemieux died last September. She had been married to Earl for 64 years.

Ober and volunteer Jeanne Shaw took over some of Mary Lemieux’s work, such as monthly reports, after she died. The pair will take over the pantry completely when Earl Lemieux retires.

“I don’t think he has any immediate plans to retire,” Ober said.

Earl Lemieux enjoys “everything” about volunteering at the pantry, he said.

In the beginning, just the couple worked at the pantry, but over the years various volunteers have come and gone. Now, the pantry has seven volunteers.

“I don’t know if I could explain,” Ober said of what a typical day is like at the pantry. She said that if a lot of people come at once, “Everybody’s so good. They don’t mind waiting. They like to gab.” 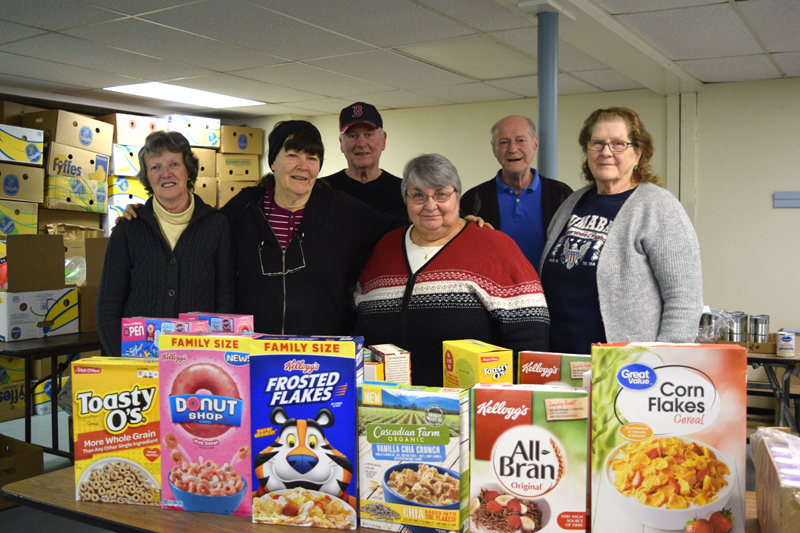 Most days the pantry is open, the volunteers do not know how many people will come and when.

The St. Denis Food Pantry was born out of the town asking for Earl and Mary Lemieux’s help.

Whitefield had a closet at the town office stocked with food for residents in need, Earl Lemieux said.

When the couple first retired, they wanted to do something for the town. They decided to prepare two meals a month. After a while, they were asked to create a pantry because the town office needed the closet.

“Everything from the tables, and these carts, comes out of our pockets,” Earl Lemieux said. He is not sure how much he and his wife put into the pantry over the years.

The pantry was not always at its current location – the hall across the street from St. Denis Church. The first location was at the church in Kings Mills. Earl Lemieux said the pantry moved to the hall at least six years ago.

“We are pretty fortunate to have it,” Earl Lemieux said of the basement space the pantry uses.

For 20 years, the system for giving out food was to hand out pre-made boxes of various sizes depending on the number of people in a family. Now the pantry is changing up the process.

“The main comment I’m getting is that ‘I’m very happy that I can choose what I want because I feel bad if I have to waste it,’” volunteer Mabeline Small said. “I’ve had several people tell me that.”

Ober said the pantry follows federal income guidelines for recipients of food from the pantry. However, she said the guidelines are not overly restrictive. “I don’t know of anyone that’s been turned away,” she said. 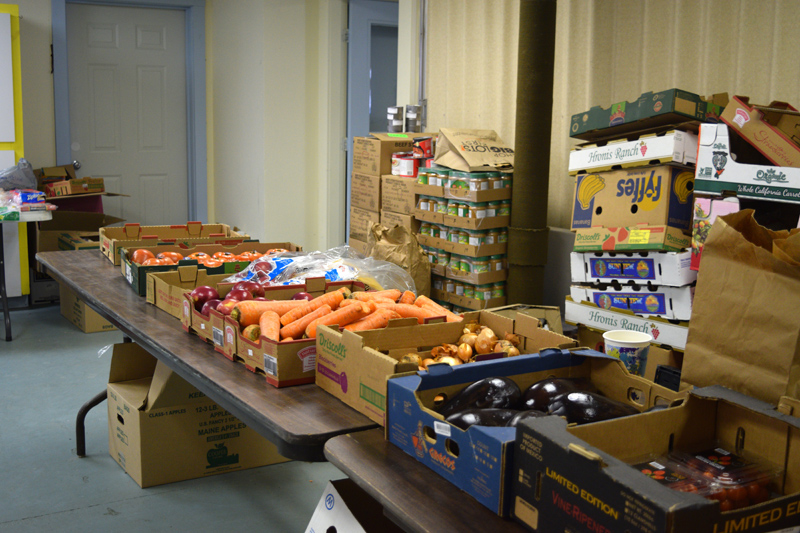 The pantry offers fresh vegetables, canned goods, dry goods, fish, all types of meat, and more. The pantry buys most of the products from Good Shepherd Food Bank and Sam’s Club in Augusta.

At Good Shepherd Food Bank, the pantry has a “bank” of money it draws from to purchase their food. Previously a volunteer would order and pick up the food, but now Good Shepherd delivers the food.

Earl Lemieux buys other food in bulk at Sam’s Club and breaks down some food into smaller packages, such as fruit containers and cheese.

Whitefield Board of Selectman Chair Tony Marple said the town reimburses Earl Lemieux for food with money donated to the town.

On the Wednesday before opening to the public, volunteers start arranging the food on tables. The morning the pantry opens, the volunteers take out the refrigerated items.

Ober said the group recently started to meet every three to four months to discuss how things are going.

With all the changes to the food pantry, one thing stays the same: the need for more volunteers and the desire to help more people in need.

Currently, most of the pantry’s clientele comes from Whitefield.

“We are supposed to supply Alna, but we only get one or two from Alna. They don’t want to come. That makes a difference,” Earl Lemieux said.

“I think they are too proud to ask for (help),” he said. “A lot of people don’t want to be seen picking up extra food.”

Though people are still in need, he said the number has dropped off.

The pantry typically raises funds with a yearly supper and craft fair. However, Earl Lemieux said future efforts depend on what the “new regime” wants to do.