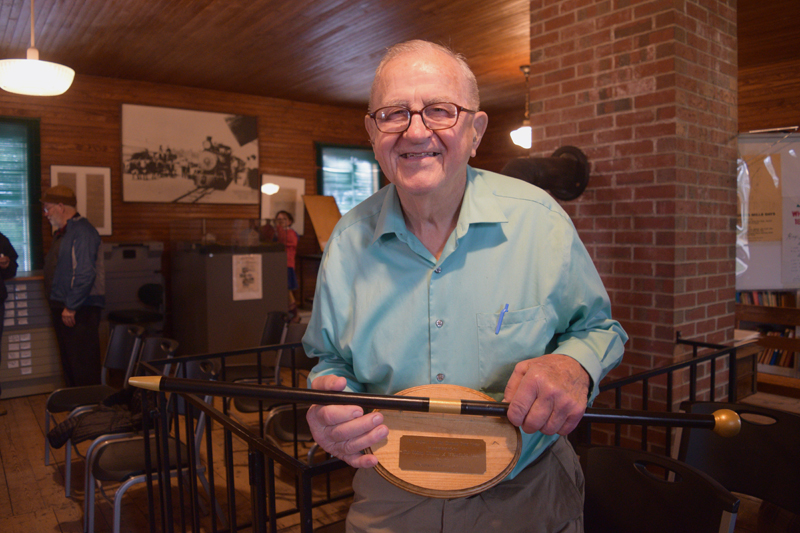 A full house witnessed the presentation of the Boston Post Cane to lifelong Whitefield resident and “legend” Albert Boynton, 92, at the Whitefield Historical Society’s meeting place above the town office Saturday, Nov. 3.

Boynton was born May 18, 1926 in the building known as the mill camp on Clary Lake. He was the youngest of seven children.

A year after he was born, the family moved to a house across the street. He has lived in that house for 91 of his 92 years.

When Boynton was 17, with his father’s signature for permission, he entered the U.S. Navy during World War II. On April 2, 1945, at the age of 18, he survived a kamikaze attack on his ship near Okinawa.

Boynton was a nurse’s aide at Togus, the U.S. Veterans Administration facility in Augusta, for eight years, and a mailman for Whitefield and surrounding towns from 1960-1990. 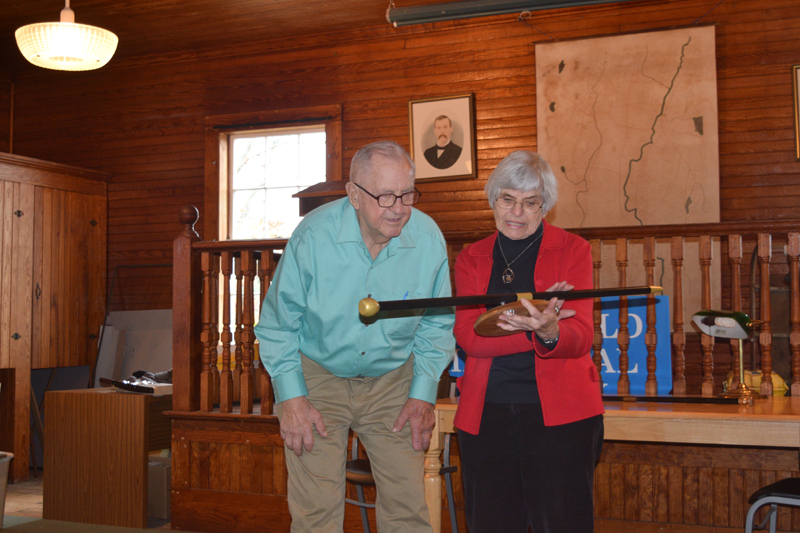 Albert Boynton and Marie Sacks, an archivist for the Whitefield Historical Society, look at a plaque recognizing Boynton as the town’s oldest resident. (Jessica Clifford photo)

Throughout his other careers, he was also a dairy farmer.

While at Togus, he met his wife, Carolyn, who died 15 years ago. They were married for 49 years. He has three children: David Boynton, Beverly Cronkhite, and Janet Kittner.

During the ceremony, he said he and his wife wanted to have a large family. “We would like to have a face in every window,” he said, recalling a conversation they had.

Cronkhite said Boynton has spent his time since his 1990 retirement reading a wide range of books, such as historical fiction and the Bible, and watching the Boston Red Sox.

Every Thursday morning he joins a senior men’s group at Sheepscot General. He attends the South Somerville Baptist Church on Route 17.

Whitefield Selectman Bill McKeen spoke about the tradition of the Boston Post Cane. 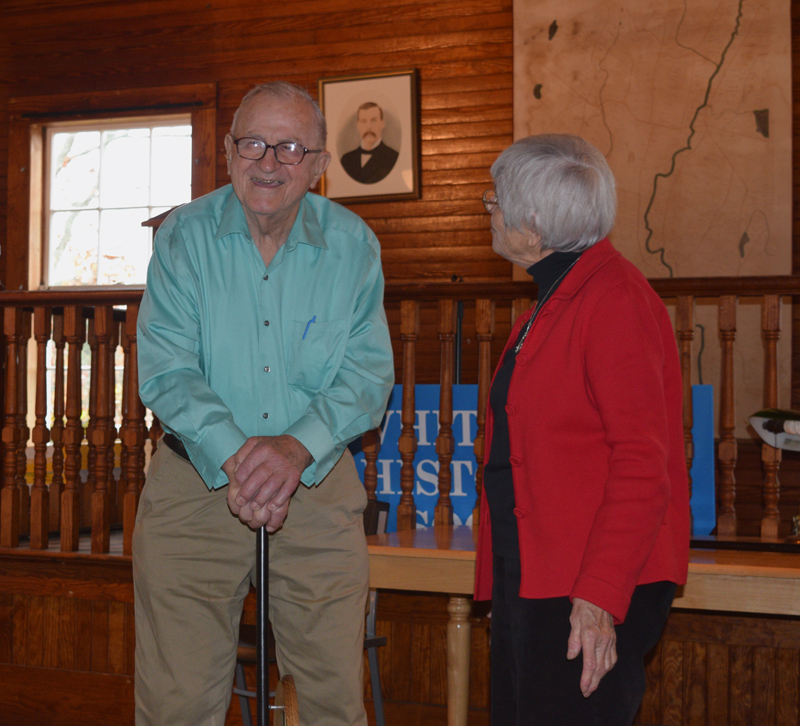 Albert Boynton leans on a replica of Whitefield’s Boston Post Cane as Marie Sacks looks on during a ceremony at the Whitefield Historical Society on Saturday, Nov. 3. (Jessica Clifford photo)

Though the original Boston Post Cane was present for the ceremony, the town does not give it to the oldest resident. Instead, Boynton received a replica made by McKeen.

Marie Sacks, an archivist and founding member of the Whitefield Historical Society, presented the cane.

Sacks called Boynton a “legend” in the town.

“I may not be the oldest. If an older one comes along, he’s welcome to it,” Boynton said, ending the ceremony with laughter.

The publisher of the Boston Post, Edwin Grozier, gifted gold-headed ebony canes to hundreds of New England towns in 1909 with instructions to present the cane, with the newspaper’s compliments, to the eldest male resident of the town.

(Correction: An earlier version of this article online and on the front page of the Nov. 8 print edition incorrectly reported that Albert Boynton attends a senior men’s group at Sheepscot General on Thursday evenings. The group meets Thursday mornings. The Lincoln County News regrets the error.)