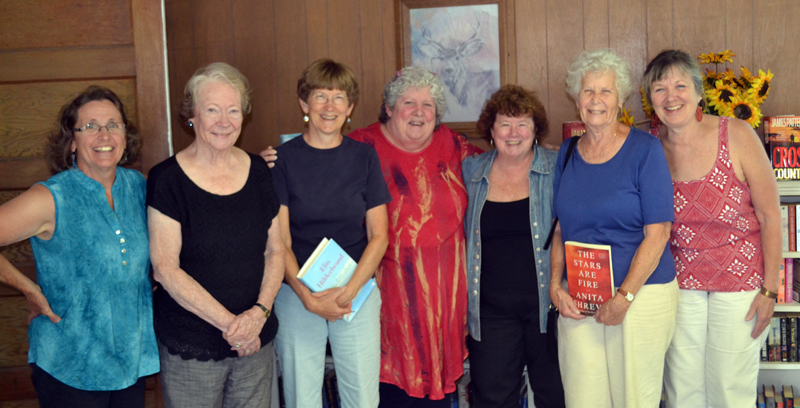 The public library inspired by a letter from a Whitefield Elementary School student opened its doors Wednesday, July 12. The Whitefield Public Library will be open at the Arlington Grange Hall from 10 a.m. to noon every Wednesday and Saturday throughout the summer.

Volunteers are considering keeping the library throughout the school year as well, organizer Sue McKeen said. “It’s the summer for now, but our hope is to go longer,” she said. “We’re going to see how it goes.”

The Whitefield Board of Selectmen received a letter in March 2016 from Whitefield Elementary School student Quinn Conroy, then in the second grade, requesting a public library, “because on summer vacation there is nothing to do.”

Whitefield residents have to make a long drive to libraries in Augusta, Damariscotta, or Gardiner, Quinn said at the time.

The construction of a public library in Whitefield was proposed years ago at town meeting, but voters rejected the idea due to the expense. 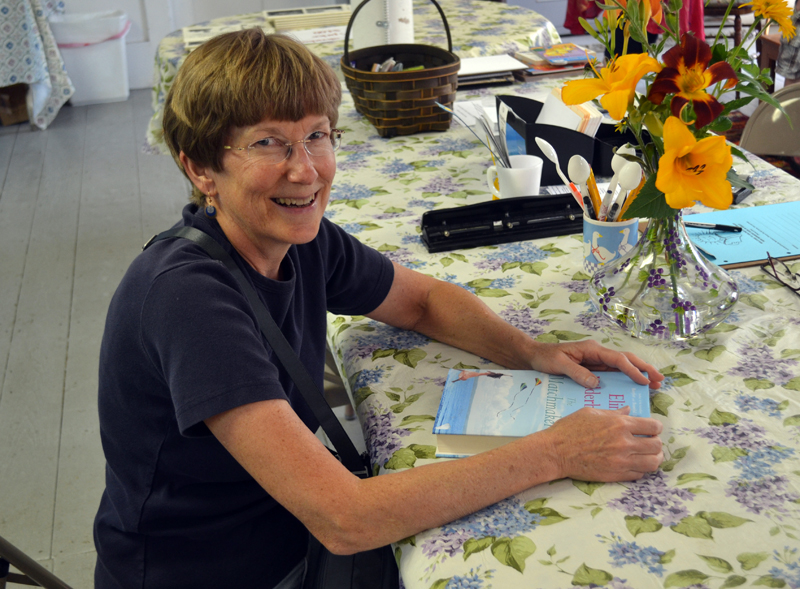 Whitefield Public Library volunteer Pat Parks checks out her first book from the library, which has a large collection of fiction and nonfiction books for adults. (Abigail Adams photo)

However, since the selectmen received Quinn’s letter, community members and school officials have worked to open a public library as a strictly volunteer effort.

They did not have to look far. McKeen asked Debbie Rogers, secretary for the Arlington Grange, if the Grange would host the library. The response was an enthusiastic yes, Rogers said.

“Every member of the Grange was thrilled,” Rogers said. Arlington Grange members are in the process of restoring the hall down the street from the school on Route 126. The hall was built in 1885 and originally served as the headquarters for the Whitefield chapter of the Grand Army of the Republic, an organization of Civil War veterans.

“We want to see (the hall) used,” Rogers said. The first floor of the Arlington Grange Hall now houses hundreds of fiction and non-fiction books for children and adults, McKeen said. There are chairs and couches to relax in while flipping through magazines.

Whitefield Elementary School loaned books from the school library to the Grange for the summer, McKeen said. However, donations from the community make up the majority of the collection, which spans children’s and young adult books, reference materials, biographies, history books, and fiction.

The library continues to accept donations of books in good condition, McKeen said. 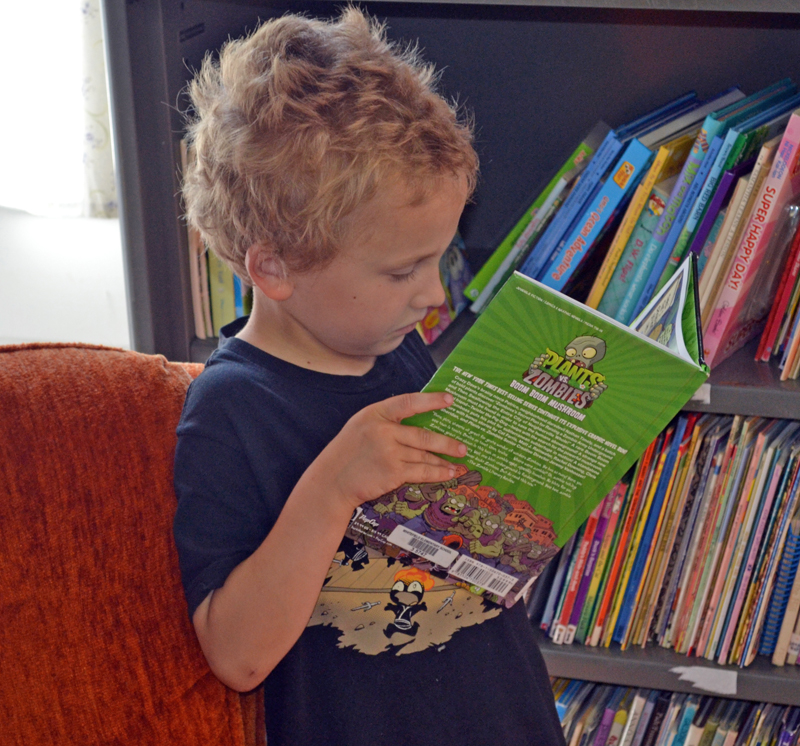 In a matter of three weeks, volunteers sifted through the donations, catalogued the books by genre and reading level, developed a low-tech check-out system, and opened the library’s doors, McKeen said.

Shortly after the library’s grand opening, Jeremiah and William Bailey were combing through the children’s books looking for a good read. William Bailey is too young for school and hasn’t yet learned how to read, he said.

Jeremiah Bailey said he loves to read and recently started the fourth book in the Harry Potter series, “Harry Potter and the Goblet of Fire.” Jeremiah already had the Harry Potter books available at the Whitefield Public Library, but was excited to find one of Mo Willem’s “Pigeon Presents!” books in the children’s section.

Jeremiah read another book in the series at school and enjoyed it, so he chose “The Pigeon Needs a Bath!” to take home. “It’s great there’s a library in Whitefield,” said Jeremiah, who lives nearby. “We go to other libraries, but it takes a while to get there.”

Jeremiah and William Bailey were the first to check books out of the library, with the help of their mother. With no scanner or computer database, library volunteers developed a system of notecards and binders to track books and library users.

Two to three volunteers will help run the library throughout the summer months, McKeen said. The library hopes to continue after the summer, depending on usage and volunteer availability, and add a children’s story hour, she said.

“The cool thing about this library is that it’s a community event,” she said. “We want the community to contribute to it and to come out and enjoy it.”

For more information or to donate books, contact McKeen at 446-7473 or smckeen66@gmail.com.