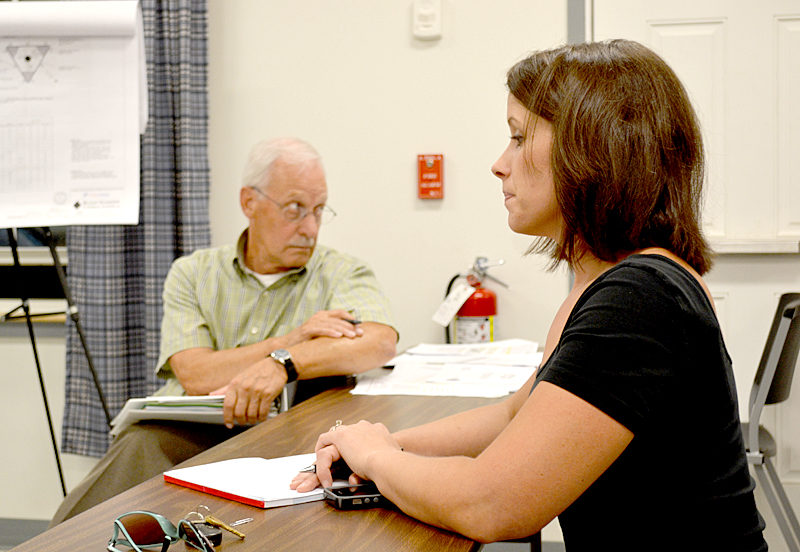 Jim Hebert and Megan McGuiry, of Black Diamond Consultants, listen to residents’ concerns about a cellphone tower site at a public hearing before the Whitefield Planning Board on Wednesday, Aug. 17. (Abigail Adams photo)

Whitefield residents overwhelmingly voted to change the town’s wireless communication ordinance in June to accommodate a cellphone company’s plan to build a tower in Whitefield. With the location of the tower site recently announced, about 30 residents turned out to a public hearing held by the Whitefield Planning Board on Wednesday, Aug. 17 to express their opposition to it.

“Why there?” was a question several residents asked throughout the public hearing.

Residents will have until 3 p.m., Friday, Sept. 2 to submit written comments to the town for consideration as part of the public hearing process, planning board members said.

After the public comment period closes, the planning board will meet to either approve the construction of a 190-foot monopole cellphone tower at 571 Townhouse Road or send U.S. Cellular in search of a different location.

Planning board members requested additional information from Black Diamond Consultants, the firm U.S. Cellular Corporation hired to handle the permitting, licensing, and construction of the cellphone tower, before the final decision is made.

The board asked for a copy of the lease to ensure the town is protected if the site is abandoned, a map of the overlap between the coverage areas of the proposed tower and other U.S Cellular towers, and a map of the search area U.S. Cellular used to identify the tower site.

Megan McGuiry, responsible for identifying real estate for the cellphone tower, began to contact property owners in the search area to see if anyone would be interested in leasing land to U.S. Cellular. Six property owners expressed interest, McGuiry said, but the only location U.S. Cellular said would work was Pagurko’s property on Townhouse Road.

“We’re consultants,” Hebert said. “We don’t ask too many questions.”

The process of identifying a location for a cellphone tower dates back to 2014. Outdated Google Earth images that depicted the site for the tower as a wooded lot were submitted in the application to the planning board, Hebert said.

Since 2014, the trees on a large swath of property on the lot have been removed, Hebert said. At the outset of his presentation, Hebert apologized for the oversight in the application.

There are still enough trees between the site and the road to screen the 8-foot fence that will surround the 75-by-75-foot area that would contain the cellphone tower and equipment shed, Hebert said.

A balloon test, in which a balloon was released to the height of the proposed cellphone tower, was conducted the morning before the meeting in an effort to determine the visual impact of the tower. While the balloon was only in the air for a short period of time due to wind conditions, the tower was only visible in two locations from Townhouse Road and Route 126, Hebert said.

The balloon test was conducted on short notice without much public warning, Hebert said. While Hebert apologized, the lack of public notice continued to be a sticking point for people in attendance, with many asking for another balloon test. While no date was set, Hebert said Black Diamond Consultants would be willing to conduct another test.

Several residents asked about safety issues surrounding the cellphone tower, which is in an area surrounded by other property owners, many of whom raise livestock, resident Natasha Mayers said. U.S. Cellular conducted a study of the risk of exposure from radio frequency emissions to the general population, Hebert said.

The study determined that if all antennas on the tower are functioning simultaneously and at full capacity, which Hebert said they never do, the tower would still only reach 0.83 percent of the maximum permissible exposure level for radio frequency emissions set by the Federal Communications Commission.

The reason Whitefield adopted a wireless communications ordinance was to limit the visual impact of cellphone towers and make sure, if one was built, it was compatible with the town, resident John Del Vecchio said. “They haven’t proven that yet,” Del Vecchio said.

Del Vecchio and others in attendance remained unconvinced the town and the cellphone company did its due diligence in looking at several sites to determine which was best for the town.

“No one expected it to be where it is,” Tom Benne said.