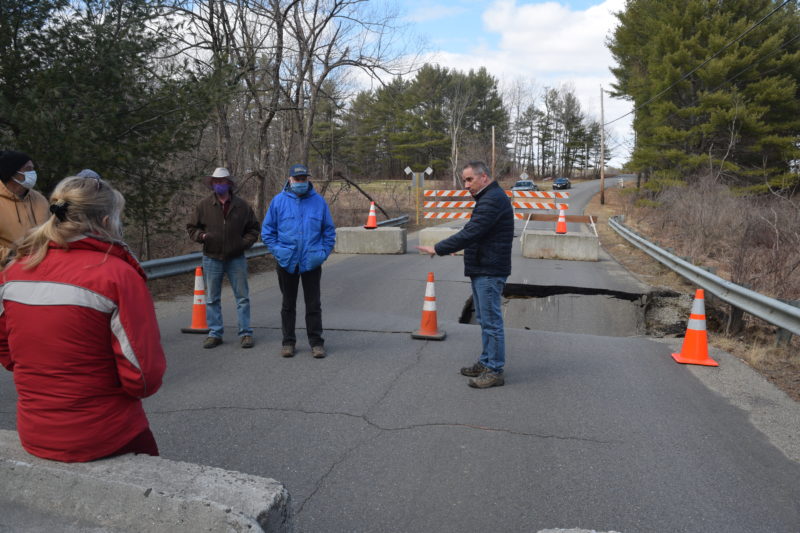 The Whitefield Board of Selectmen is working with a civil engineer to develop a plan for replacing a culvert on South Hunts Meadow Road that collapsed Thursday, April 1.

The culvert, known as the Leonard’s Bridge culvert, has been deteriorating for some time. In the January edition of the Whitefield newsletter, Selectman Lise Hanners called the culvert “a long and complicated project” that required ongoing contracts with the Maine Department of Transportation and contractors who will do the repairs.

During the board’s meeting Tuesday, April 6, Selectman Keith Sanborn said Coffin will contact several companies to find an available culvert. Coffin and the selectmen want the new culvert to be larger than the old one, which was around 14 feet in diameter.

“As big a culvert as we can get in there, which is bigger than what is there currently, is a step in the right direction,” Hanners said.

The selectmen will wait for Coffin’s report, which they hope to have within the week, before moving forward with a design.

Fred Kimball, a member of the Pittston Board of Selectmen, attended the meeting on behalf of the town.

Kimball said that Pittston’s residents and selectmen are concerned about excessive use of the town’s Jewett Road, which runs parallel to South Hunts Meadow Road and is a natural alternate route while the road is closed.

Jewett Road is posted to prohibit thru traffic and weight over 26,000 pounds, and Kimball expressed concern that the road will get more use than it can withstand.

Kimball said that the Pittston selectmen are sympathetic to the issue, but urged the Whitefield selectmen to act quickly to preserve Jewett Road.

The selectmen understood of Kimball’s concerns and said they will take his input into consideration.