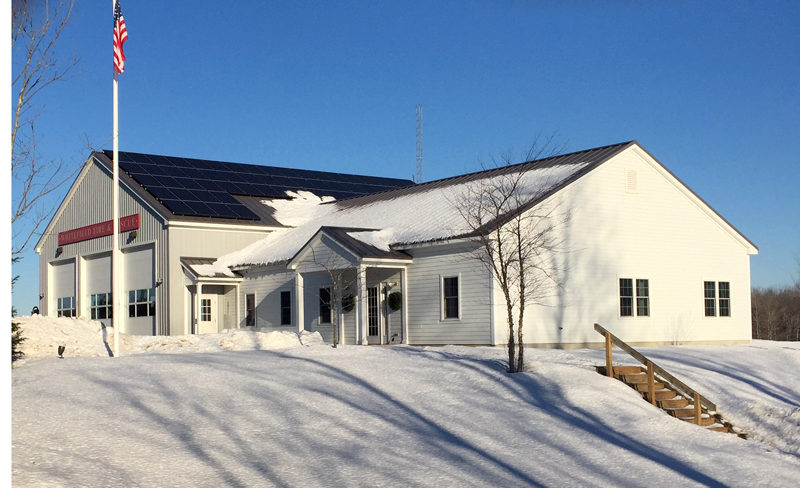 The municipal solar array in Whitefield, the installation of which was threatened by uncertainty surrounding net metering, is now fully operational.

The 18.72-kilowatt system on the municipal fire station is expected to generate 25,000 kilowatt hours of electricity annually. The system went online about a week ago, said Richard Simon, of The Power Co., which owns the installation. Whitefield has a lease-purchase agreement with The Power Co.

“It’s what the voters wanted, and I’m pleased that we were able to provide it,” Whitefield Board of Selectmen Chair Dennis Merrill said. “It seems like a progressive step for the town.”

The lease-purchase agreement, which voters authorized selectmen to negotiate at the annual town meeting in March, nearly did not come to fruition due to uncertainty about the future of net metering.

In a lease-purchase agreement for a solar installation, a municipality hires a contractor to install a solar array on its property, which the contractor owns. The municipality leases the equipment and receives the energy credit for the power the system generates. The town then has the opportunity to buy the equipment after a set amount of time for a reduced price from the cost of installation. 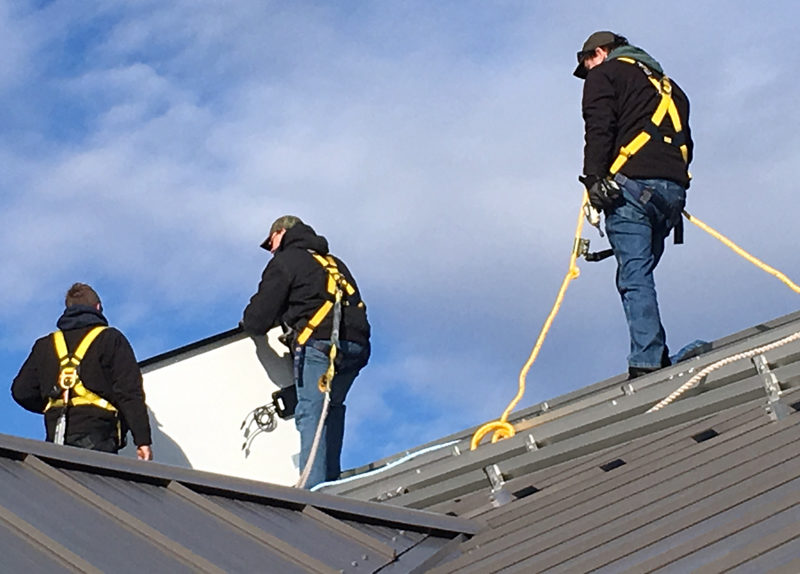 Workers install a solar array on the roof of the Whitefield municipal fire station in mid-December. (Photo courtesy Richard Simon)

Erik Ekholm, a proponent of solar energy, was the first person to bring the idea of going solar to selectmen, and was largely responsible for the proposal going to a vote at town meeting. “This has been an extremely long process. It’s wonderful to have (the system) complete and working,” Ekholm said.

Whitefield began the process of selecting a contractor shortly after the March vote. The process was derailed due to political wrangling surrounding new regulations for net metering, one of the most divisive issues in the 127th Legislature and in legislative campaigns ahead of the Nov. 8 general election.

Under net metering, utility companies credit the owners of grid-tied solar installations for the energy the installations produce. For proponents, net metering is an important incentive that supports the growth of Maine’s solar energy industry. For opponents, it is an unnecessary subsidy that shifts costs to other ratepayers.

“An Act to Modernize Maine’s Solar Power Policy,” a bill that would have established new net metering regulations, initially passed in the 127th Legislature, but was vetoed by Gov. Paul LePage. An attempt to override the veto was defeated in the House of Representatives by two votes.

Several legislators promised to reintroduce a similar bill on the campaign trail. The Maine Public Utilities Commission, the government body responsible for establishing rules for net metering unless the Legislature passes a new law, is considering phasing the billing practice out.

While the political battle initially placed Whitefield’s plan for a grid-tied solar installation on hold, The Power Co., of Washington, expressed interest in negotiating a contract that would indemnify the town from any potential financial loss as a result of changes to net metering.

After several months of negotiations, selectmen approved a lease-purchase contract with The Power Co. in October. “It’s never easy to take action to develop new things and new ideas. It takes leadership and vision from within that community to make it happen,” Simon said.

Simon largely credits Ekholm with the project’s coming to fruition.

While Whitefield’s energy consumption and the energy production of the solar array will vary on a month-to-month basis, the lease payments should constitute a 10 percent decrease from the town’s annual electricity costs.

“It’s going to be really interesting” to watch the system’s energy production, Ekholm said. “We’re basically starting at the first of the year, so we’ll be able to see what the energy production looks like over a full calendar year.”

The energy production can be monitored in real time, Ekholm said. While the array’s production will not be as high during the short days of winter, “it’s going to be a lot of fun to watch it build up in the spring,” he said.

With net metering, the month-to-month variations do not matter, because the credit is cumulative, Ekholm said. The lease payments will be revisited after one year and then every three years to ensure they continue to represent a 10 percent reduction in electricity costs, according to the contract.

In 2022, Whitefield voters will consider buying the installation for $26,725 and making the town its own power producer.

If voters opt not to buy the equipment, the town can continue to lease the installation from The Power Co. to cover the cost of electricity in town-owned buildings.

Selectmen have said the contract guarantees a financial savings for Whitefield and indemnifies the town from any potential losses that may result from changes in net metering.

“It’s important for us, as developers, to build and prove its potential. Although we may not make as much of a profit in these types of projects, it fits the mission of what we do,” Simon said.