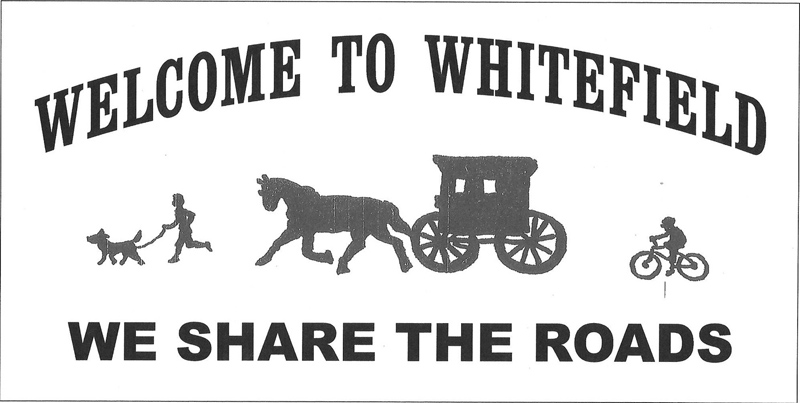 New signs with the message “Welcome to Whitefield: We share the roads” will soon greet drivers as they enter the town.

New signs will soon greet drivers as they enter Whitefield, all with the same slogan: “Welcome to Whitefield. We share the roads.”

The reflective signs, on each of the major roads into the town, will depict a horse-and-buggy, a bicyclist, and a pedestrian walking a dog.

Whitefield resident Jen Grady volunteered to design a sign over the winter after attending a meeting of Amish residents, town officials, and representatives of the Lincoln County Sheriff’s Office.

“We were talking about how to slow drivers down, how to get people to pay more attention and be aware,” Grady said.

The group brainstormed ways to keep drivers alert and aware of buggy traffic. Grady thinks others, like bicyclists and dog walkers, are also at risk.

She pointed to recent accidents involving pedestrians, including one earlier this summer, as examples.

On July 9, Whitefield attorney and musician Christopher Simpson, 64, died when a pickup truck hit him as he crossed Head Tide Road to check his mail.

Simpson’s was the eighth pedestrian death in Maine in 2019, according to the Bicycle Coalition of Maine.

But discussions about transportation safety in Whitefield the last two years have centered around the Amish community’s unique mode of transportation.

The community has grown rapidly since the first few families moved to the town in spring 2017.

In October 2017, a Whitefield man whose driver’s license had been revoked rear-ended a buggy on East River Road in an SUV, causing damage to both vehicles but no injuries.

Just last week, on Wednesday, Aug. 14, a motorcyclist rear-ended a buggy on Waldoboro Road in Jefferson. Three Whitefield residents were in the buggy. Police cited the motorcyclist’s inattention and glare from the sun as potential factors.

After the 2017 crash, Whitefield residents and public officials spoke out about safety and the visibility of buggies on winding rural roads. Discussions continued off and on until this February, when the Whitefield Amish community agreed to place oil lamps on both sides of their buggies at night and ensure all buggies have sufficient front and rear reflective tape.

Grady suggested making signs to Tony Marple, former chair of the board of selectmen, as a positive reminder to drivers that more than just motor vehicles use the roads.

She decided to create some designs, which were then selected for the project.

The town office and residents, including Grady, collected donations for the signs.

After an announcement at town meeting and advertisements in the Whitefield Newsletter, Grady and her friends held a horse ride at her Acorn Hill Farm in early August to collect donations.

“I know at one point we had six or seven people that said they would donate money for it and we needed a few more to get the minimum amount … and next thing I know we get word from the office, ‘Hey, you got $2,400 in there,’ which is more than we needed,” Ober said.

At $200 per sign, the town raised more than enough to cover the intended nine signs, Ober said.

Of what the town will do with the additional money, Ober said: “We most probably would get an extra sign or two and set the rest aside. (It’s) best not to plan on the extra until we are done installing the signs.”

The background of the signs will be white. They will have black lettering and silhouettes of the horse-and-buggy, bicyclist, and dog walker.

“I thought something different might catch their eye and it’s somewhat friendly,” Grady said.

Ober does not yet know who will make the 30-by-60-inch signs.

“They are big enough you can’t ignore it,” he said, laughing, during a phone interview.

There is no timeline yet for the installation. The Maine Department of Transportation will work with the town to decide where the signs should go, then volunteers will install them.

“I think the goal was to let people know we have wagons out here,” Ober said. “A lot of people know that already, but for those that don’t know, it’s a good way of showing it, but also we have other people doing things besides (riding in) wagons that you need to be aware of.”

Grady shared a similar sentiment about informing newcomers to Whitefield and reminding those who are in town to be aware of their surroundings.

“We have a huge problem here in town with people not paying attention and driving too fast,” Grady said. “I don’t know if it will solve the problem. Maybe not, but it might make people a little more aware that there are other things on the road besides their cars and trucks.”