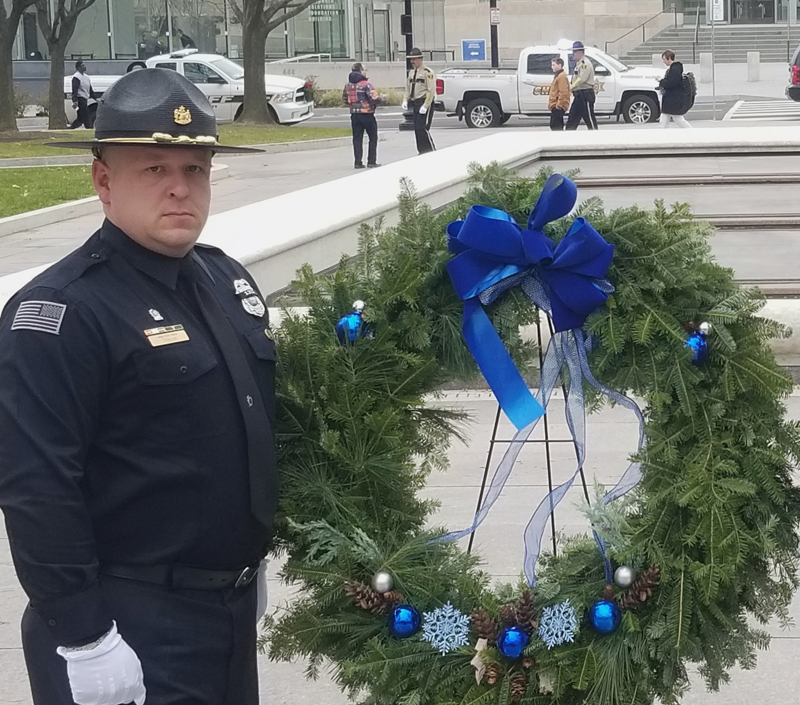 Whitefield veteran Hallis “Hal” Thayer traveled to Washington, D.C. and the Arlington National Cemetery in December with the nonprofit Wreaths Across America to place thousands of wreaths at memorials and veterans’ graves.

Thayer was a helicopter mechanic in the U.S. Marine Corps from 1994-1998 and has been a correctional trade shop supervisor at the Maine State Prison in Warren since 2000.

Wreaths Across America began when Morrill Worcester and his wife, Karen Worcester, owners of Worcester Wreath Co. in Harrington, donated 5,000 wreaths to Arlington National Cemetery in 1992. Millions of wreaths are now placed in thousands of locations across the country.

Thayer traveled to Washington, D.C. on Dec. 13 as one of three representatives from the Maine Department of Corrections.

Thayer and members of all of the sheriff’s offices in Maine traveled in cruisers with license plates honoring Somerset County Sheriff’s Office Cpl. Eugene Cole, who was killed while on duty in Norridgewock on April 25.

On Dec. 15, they handed out around 2,000 wreaths to volunteers at the Arlington National Cemetery to be placed on veterans’ graves.

Around 60,000 volunteers participated, even though it was raining, Thayer said.

“It was very inspiring,” he said. “Knowing that there are that many people out there that do care about things like that makes you feel good.”

“One thing (that was) stressed was, everybody dies twice. You die when you physically die and then you die when everybody forgets about you,” he said. “So part of the whole Wreaths Across America thing is, when you place a wreath, say the person’s name on the headstone. That way they’re not forgotten. I thought that was very neat.”

Thayer said he had not visited the national cemetery before.

“Before you go, you can’t put it into perspective what it feels (like) to walk into the cemetery. It takes a lot to get to me, but that actually did,” he said.

“It was beyond my expectations,” he said of the tribute. “It would be something that I would do every year.”

Thayer said that in the future, he would like to bring his family to experience it.

“It’s a very worthy cause. Anybody that is able and has the ability to help with that, it’s well worth their time,” he said.