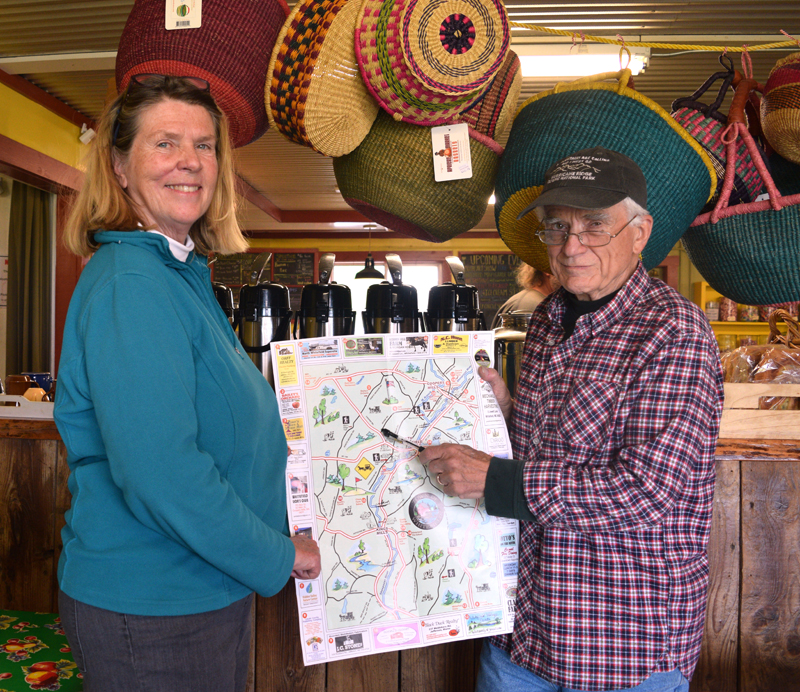 Libbey Seigars, one of the volunteers behind the new Whitefield map and guide, and Bill McKeen, Whitefield selectman and leader of the group, hold up an unfolded copy of the map. (Jessica Clifford photo)

A new map and guide showcases the activities and businesses of Whitefield and its villages, the work of a small group of volunteers.

The Whitefield Economic Development Committee’s Map and Guide Subcommittee worked off and on for two years to develop the “folksy” map for visitors and locals to know what there is to do in the rural town.

Neither town money nor fundraising was involved; instead, the committee garnered advertisements from local businesses to make the project possible.

“One of the thoughts of the economic development committee was to attract new business, but more importantly, to help the present businesses in town grow and prosper,” McKeen said. “That’s how the map and guide became a tangible effort.”

Libbey Seigars, a committee member and owner of Whitefield Pottery, said the owners of Sheepscot General gave the economic development committee a “nudge” to do the work because visitors to the store always ask what activities there are to do around town.

“There’s a lot to do in Whitefield, but it’s not always obvious,” Seigars said.

“In the meantime, the Amish came to town,” McKeen said. “That added a whole new interest factor for visitors.”

Work to form a subcommittee started with McKeen’s message in the Whitefield Newsletter calling all artists, writers, business owners, and community supporters to volunteer in the effort.

The timeline the committee established to complete the map went awry due to committee members’ varying schedules last year.

Originally the map was going to come out around this time last year, just in time for summer travelers. The due date was then pushed to this year.

The committee met about once a month and sometimes every other week for two years.

The map is the size of a magazine when folded. Inside, it contains a directory of local businesses. On the back are descriptions of the Amish community, a short history of Whitefield, and information about buildings and places of interest. The back of the booklet also lists local activities, such as horseback riding, fishing, golfing, and others.

Unfolding the booklet to its full size, one finds a basic road map indicating the three communities in Whitefield: Coopers Mills, Kings Mills, and North Whitefield.

“We made an effort on the map to make it more folksy than totally accurate road-wise,” McKeen said. 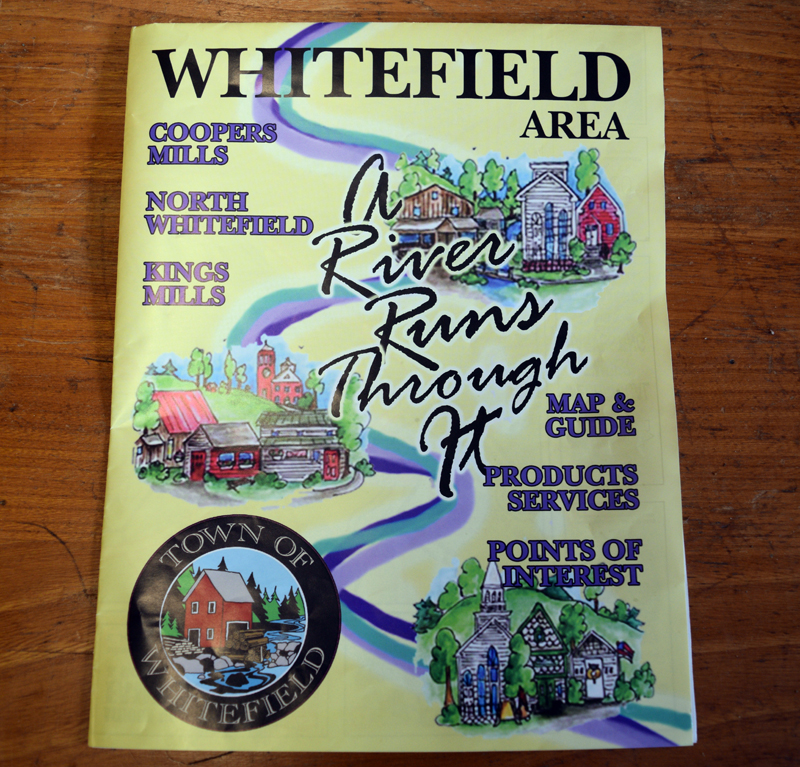 The cover of the fold-our Whitefield map and guide. (Jessica Clifford photo)

Little drawings on the map mark the location of municipal buildings and other significant buildings, as well as the trailheads for hiking trails. Twenty-four numbered markers show restaurants and businesses in Whitefield, as well as a few in surrounding communities that advertised with the committee.

“It was harder for us to sell ads than we thought at first. Then, suddenly, when it got closer and people really began to see that it was going to happen, then all the ads were sold and we could have sold more I think,” Seigars said.

The committee did not canvas for advertisements. Instead, it publicized its efforts and the businesses came to them.

The maps will be stocked at any business that advertised, and large quantities will be available at the Whitefield Library and the town office.

In addition, Dave Smith, a committee member and general manager of N.C. Hunt Lumber in Jefferson, is building covered wooden dispensers for the maps, which will be set up in various outdoor locations.

Smith has supported the project since the beginning, “with a lot of enthusiasm,” McKeen said.

Smith said he will build five dispensers; however, he does not yet know where they will be installed.

Although the map is primarily for visitors, locals could find the map of use too. “Even for people who lived here a long time, new businesses come to town that you didn’t know about,” Seigars said.

McKeen’s experience as an advertiser and graphic designer helped the project become a success, with Seigars calling him the “map expert.”

“His expertise was just critical to the success. The rest of us were supporting players,” Seigars said.

McKeen created the map by making hand-drawn mock-ups and then designing the graphics on Adobe Illustrator and Photoshop.

Whitefield residents Libby Harmon and Christine LaPado-Breglia wrote the information about the town on the back page.

A kickoff party to celebrate the map’s completion will take place at Sheepscot General from 5-7 p.m., Friday, June 14. People can come pick up a map and enjoy the monthly wine tasting and snacks provided by Taryn and Ben Marcus, owners of the store.

As for the future of the map, McKeen said, “We hope that if it is popular, it will be updated and produced annually.”