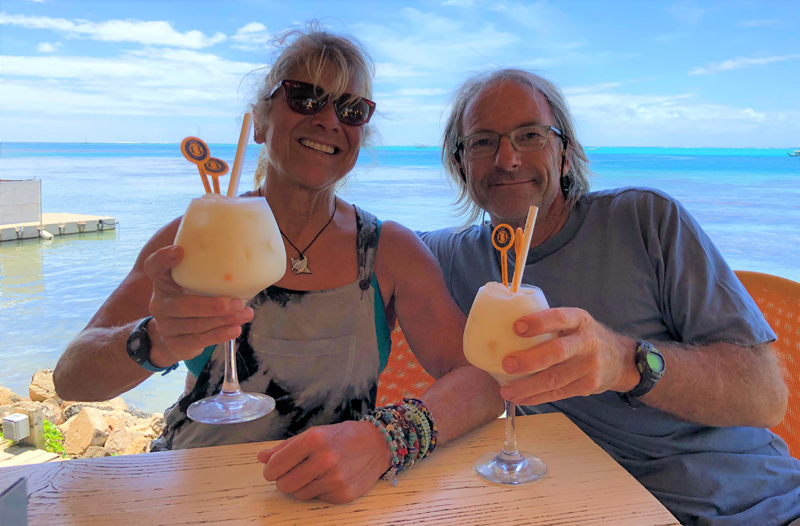 Holly Martin of Bristol wanted to sail to New Zealand. She was born there, and arriving on the island’s shores would represent a full circumnavigation of the globe. But the country’s borders were closed during the height of the COVID-19 pandemic. Travel restrictions are loosening despite the surge of the omicron variant, but the raging cyclone season in the South Pacific Ocean in the hemisphere’s summer season forged another roadblock in Martin’s path.

In the meantime, she is living on her Grinde 27-foot monohull sailboat, Gecko, in French Polynesia, kite surfing and free diving 90 feet into the ocean, holding her breath for three-and-a-half minutes at a time. 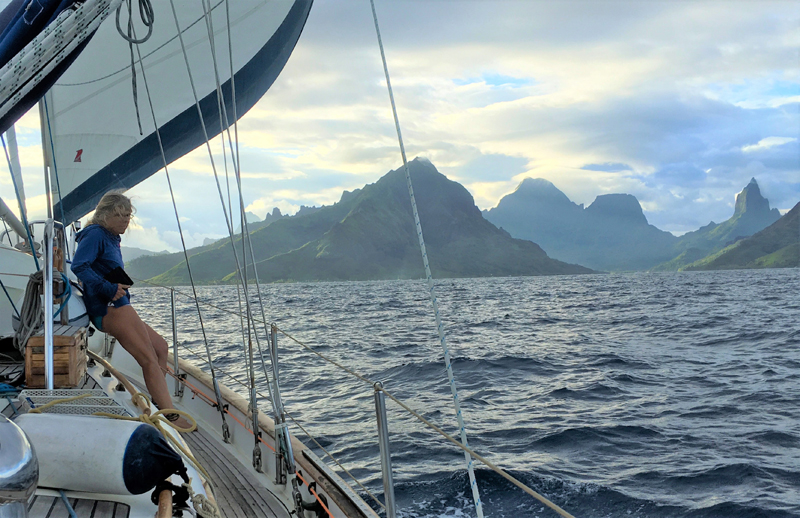 Jaja Martin on a sailboat she is watching for her friends in French Polynesia while they are away in England. (Photo courtesy Jaja Martin)

In October, her parents Jaja and Dave Martin left Bristol to sail with their daughter for a month around the French Polynesia Society Islands, which includes places like Tahiti, Moorea, Raiatea, and Bora Bora.

But Holly Martin has been exploring the ring of atolls in French Polynesia, which rise about three feet above sea level and provide passes to protection from the open sea, but little else.

Jaja and Dave Martin flew into Papeete, Tahiti where they picked up a boat they agreed to watch for friends who returned to England for a month.

As skilled sailors, the Martins were able to navigate the narrow passes through reefs surrounding the islands that could wreck a boat and potentially kill anyone on board. 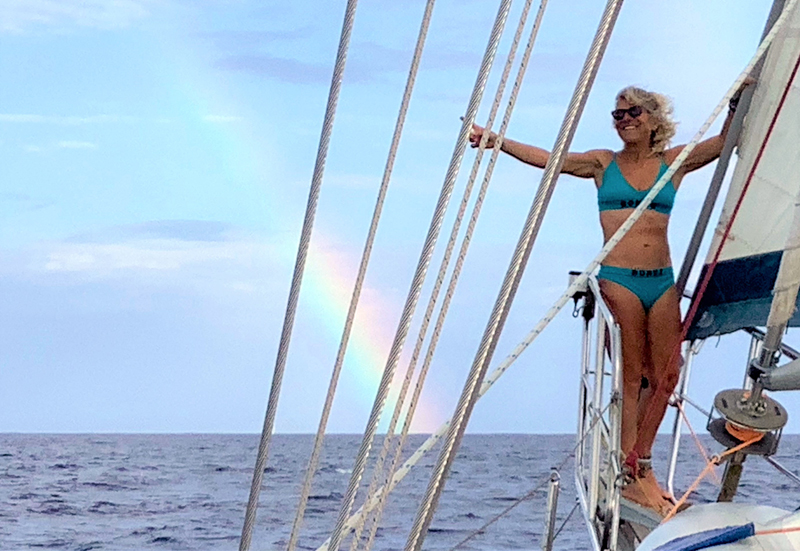 “It sounds dramatic, but it’s hard to swim over a reef,” Jaja Martin said. It was the first time Dave Martin had seen his daughter since the start of the pandemic.

After overcoming engine issues on both boats, Holly Martin convinced her mother to get up on a kite surfing board near the Fakarava Atoll in the Tuamotu collection of atolls, where she “crashed more than surfed” in the high winds, Jaja Martin laughed.

They went snorkeling with sharks and sting rays, and tasted fresh bananas, pineapple, and mangoes. The islands of Raiatea and Taha’a offer historical sites to explore and intriguing legends from the original inhabitants before France took over. 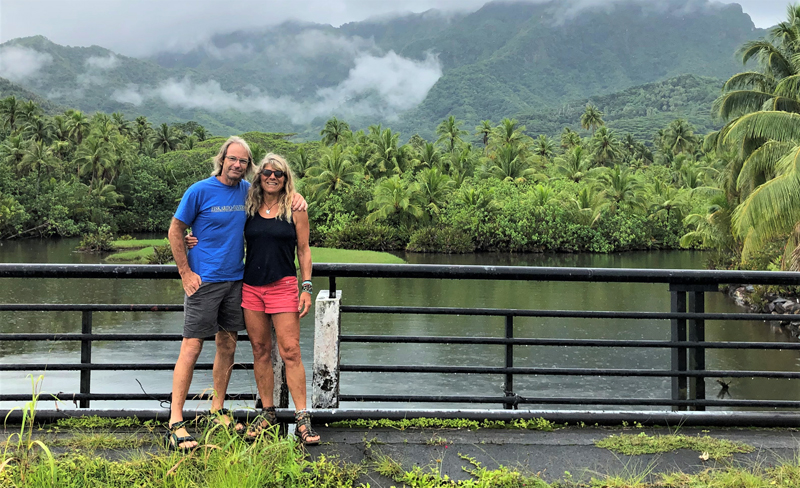 Around 11 a.m. one morning, Jaja and Dave Martin left the grocery store in Moorea with a cool drink, looking for a place to sit in the shade. They found a spot next to a woman waiting for a 3 p.m. bus.

They started chatting, and the woman told the couple in French the legend about each of the mountains encircling the valley. One mountain has a large hole, with an outline that makes it look as though the hole is the eye of a young girl with her hair flowing down, looking up at the sky. 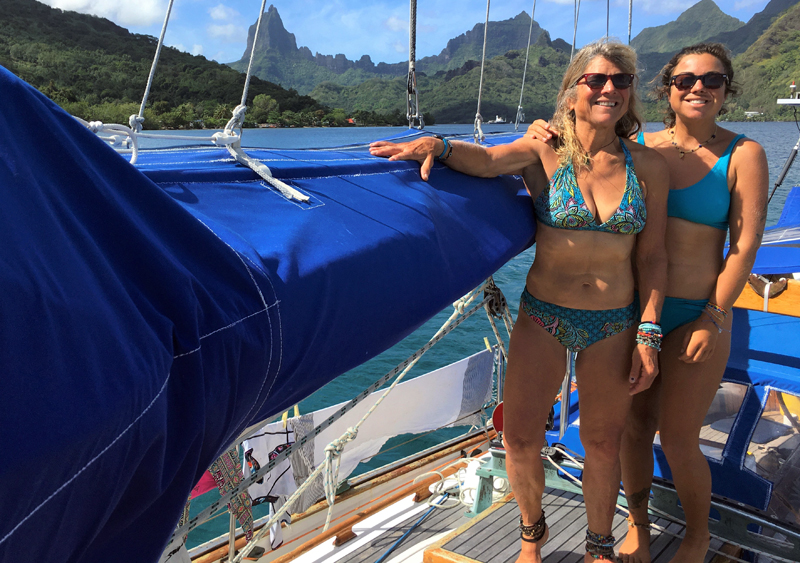 Jaja Martin, left, and daughter Holly Martin pose on a boat in French Polynesia, where she has been living for about a year. (Photo courtesy Jaja Martin)

The islands of Raiatea and Taha’a had a lot of volcanic and storm activity, which indigenous people in the area interpreted as warriors harnessing and stealing the mountain.

“It was so cool to just sit there and hang out and hear the legends of the island,” Martin said.

As the couple hitchhiked back to the boat, they were picked up by a man who worked at a local museum on the historical aspects of the area, as well as the legends and conservation efforts led by locals. He told them to stop by, and Jaja Martin saw the myths and legends the woman at the bus stop shared written out. 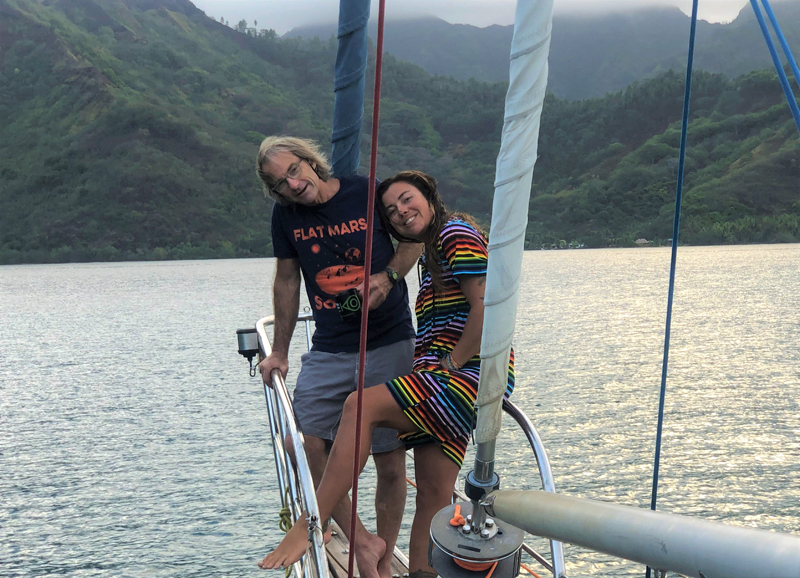 Dave Martin, left, and Holly Martin sailing in French Polynesia, where she has been living for about a year. (Photo courtesy Jaja Martin)

Holly Martin is documenting her experiences weekly on her YouTube channel, Wind Hippie Sailing. Members on her Patreon account, an online subscription service for content creators and artists, donate money for her to purchase new cameras and maintain her boat, but the videos are also freely available on YouTube, with over 5 million views in total.

Her 49,000 subscribers are drawn to her bravery in sailing solo around the Caribbean, but Martin is someone well-prepared for the voyage. She grew up on her parents’ cozy Cal 25 sailboat during their own circumnavigation trip, and has spent more than half her life on a boat.

“It was a really nice time of our life,” Jaja Martin said, despite living without insurance or really anything on land. “We were a contained unit always moving forward.” 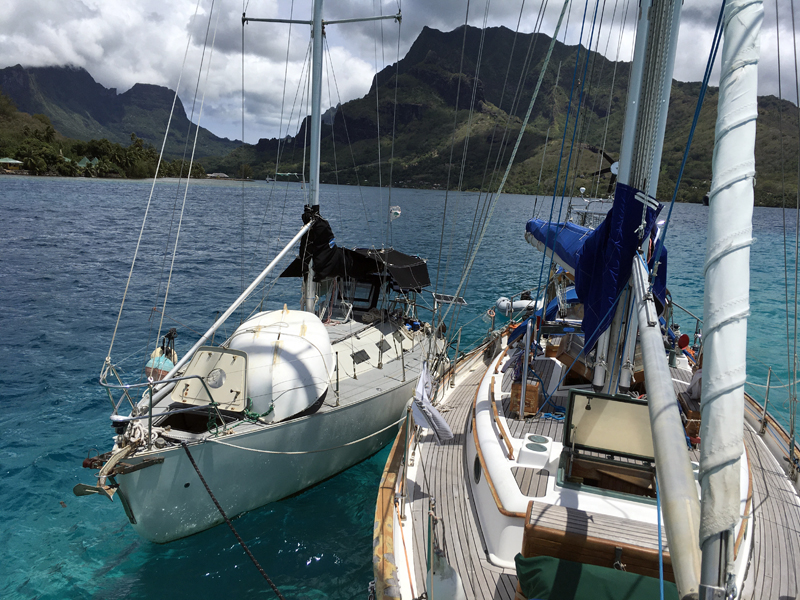 After sailing in the Arctic for five years, the Martin family came down from Greenland to Maine to repatriate, and discovered Round Pond.

“Sometimes you pick a place and you don’t know why,” Martin said of the neighborhood where they still reside.

Holly Martin plans to wrap up the final leg of her circumnavigation trip in April, and spend time in New Zealand.

“But I wouldn’t be surprised if she stays in French Polynesia, she loves it,” Jaja Martin said.