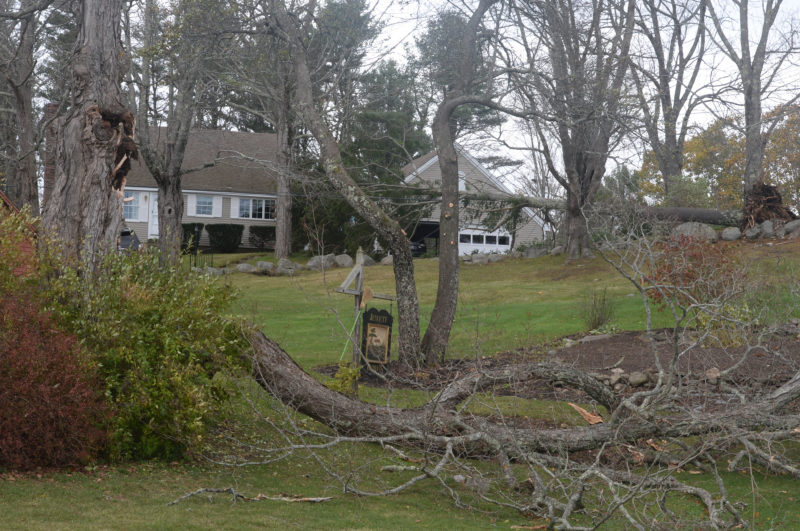 Hopkins Hill Road in Newcastle was hit hard, with multiple trees down, including two on power lines. This photo was taken from Route 1 in Newcastle looking up the hill.

Over 16,000 Lincoln County households were still without electricity at press time Wednesday, Nov. 1, according to Central Maine Power Co., as the utility worked to restore power after a major rain and windstorm pummeled the area Sunday night through Monday.

One man fell off a ladder during the storm, but declined medical treatment, Westrich said.

LCEMA worked closely with area nursing homes to ensure that residents were safe and to mitigate any effects of the outages, according to Director Casey Stevens. No evacuations were required.

At the height of the storm, some fire departments had to refrain from responding to calls of trees or wires down in order to keep firefighters and their equipment safe from harm, although they continued to respond to traffic incidents and injury calls in spite of the danger, Stevens said.

Staff at the communications center were tasked not only with dispatching emergency calls, but also with tracking locations where roads were closed so responding agencies could avoid debris in the roadway and arrive at scenes safely, according to Westrich. The center handled this responsibility with a staff of four communications officers and Westrich.

Outages were widespread after the storm, affecting every municipality in Lincoln County, with coastal areas and elevated inland locations hardest hit, according to LCEMA.

Although full restoration may not take place until Saturday for some customers, CMP said Tuesday that it was “positioned to make major progress on power restoration” after the storm caused the highest number of outages in CMP’s 118-year history, exceeding the outages from the Ice Storm of 1998.

As the storm cleared Monday afternoon, there were 71 roads closed in Lincoln County, including parts of Routes 17, 27, 32, and 129; and telephone service was out in parts of Alna, Bremen, Bristol, and Jefferson, according to LCEMA.

Residents relying on generators for electricity were advised by LCEMA to exercise due caution.

“We would like to remind residents using generators to operate them safely outdoors away from structures,” Stevens said. The LCEMA website offers more information about the safe operation of generators.

Clearing downed trees and limbs can be highly dangerous due to the possibility that live wires may be tangled within the debris, Stevens said. Despite the danger, LCEMA has been receiving reports that some residents are engaging in this activity instead of waiting for qualified  crews to arrive.

“The CMP crews will arrive, but it may take some time,” Stevens said. “We really encourage residents to wait for the experts instead of taking risks on their own.”

Stevens said that residents clearing debris from wires won’t expedite power restoration, only place themselves in danger from wires that may already be charged with electricity, or may become charged at any moment.

On Monday, CMP reported that “enormous progress” had been made on storm recovery by restoring service to all hospitals and protecting the public from risks of energized lines and damaged equipment.

On Tuesday, of the 26,934 CMP customers in Lincoln County, 21,601 of those households had power outages, according to CMP.

“We expect to restore service to large customer groups by completing repairs to transmission and major distribution lines,” CMP spokesperson Gail Rice said Tuesday. “We also expect to make more progress on damage assessment, which should allow us to develop a general restoration estimate.”

Rice noted that progress made so far comes despite difficulties gaining access to many areas due to downed trees and flooding.

High demand from widespread damage to utilities throughout New England and eastern Canada has been a challenge to CMP efforts to get more crews. Reinforcements of almost 500 additional line and tree workers were expected to arrive Tuesday, with more to follow from as far away as Illinois, Kentucky, Ohio, and West Virginia.

“Our crews are working as quickly and safely as possible, and we ask people to refrain from approaching them with questions that can slow their work and create safety concerns,” said Rice. “We encourage customers to go to our website for restoration updates, and let our crews focus on safety as they go about their tasks.”

Stevens said on Tuesday afternoon that CMP had not given any indication of how long power restoration will take for Lincoln County areas, other than a broad statement that most people in the state should have power by late Saturday.

Stevens credited Lincoln County residents who heeded storm warnings and stayed off area roads during the event with making a bad situation better. “It makes a big difference when folks stay home, allowing emergency personnel and power crews to do their work,” Stevens said.

Looking toward the next major storm, Stevens said, “Preparedness is key. The more you can be prepared, the better off you will be.” Information on preparedness may be found on the LCEMA website, and LCEMA staff encourages the public to call with any questions.

Both Stevens and Westrich wanted to thank their staffs, as well as fire departments, law enforcement, and emergency medical services for a job well done during the storm. “They were all awesome,” Westrich said. “Another example of highly trained professionals responding to a tough situation.”