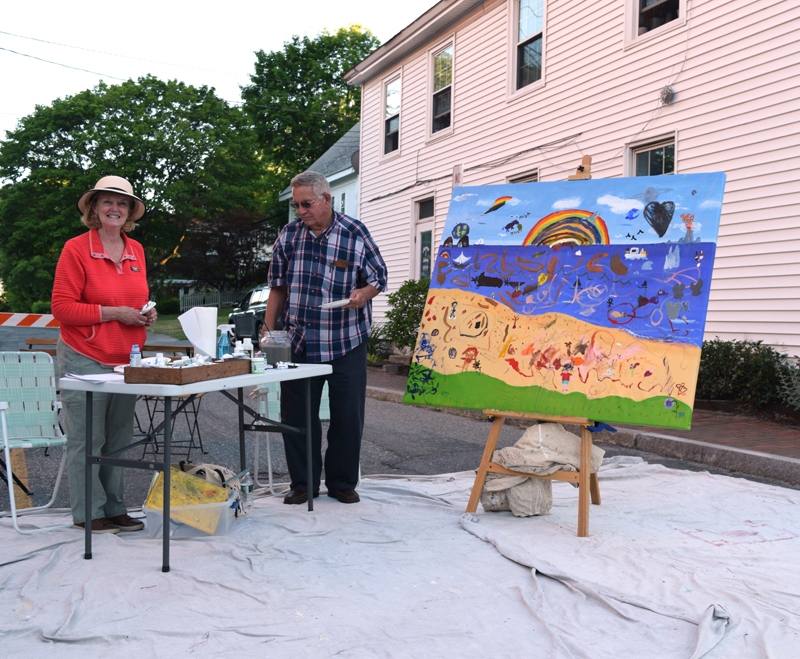 Artist Celia Ludwig (left) and her husband Stephen stand at the community mural station at the Wiscasset Art Walk on Thursday, June 24. Ludwig came up the with the idea for the mural and donated the canvas. (Nate Poole photo)

Local musicians filled the village’s art galleries and sidewalks with the sounds of guitars, harps, and even a penny whistle, while patrons of all ages participated in hands-on art projects, perused the wares of local artisan vendors, and engaged with local nonprofits.

Wiscasset Art Walk co-founder and organizer Lucia Droby said that she was pleased with the turnout for the event after last summer, when the Wiscasset Art Walk was replaced by hourlong Walk Around Wiscasset events, which were mostly attended by locals. 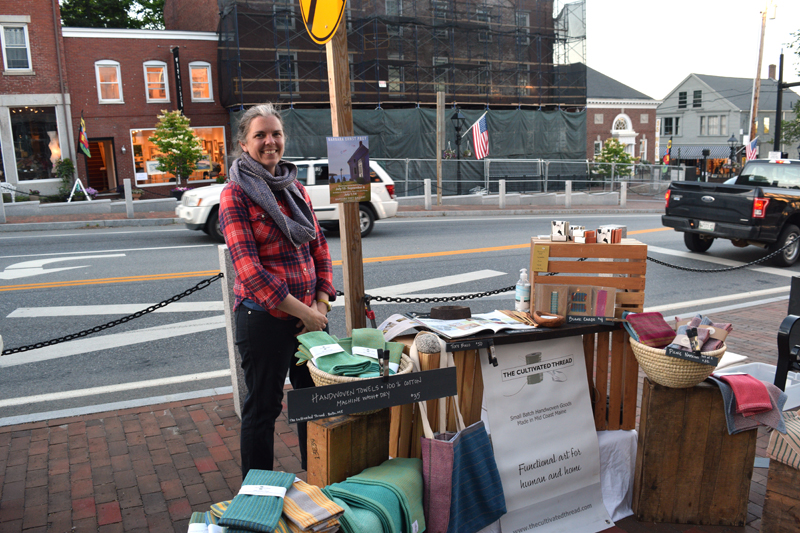 “It was kind of low-key for the season, so today feels really great because we’re back to normal, I would say, and it’s very enthusiastic,” Droby said.

Droby co-founded the art walk in collaboration with the town in 2013 after moving to Wiscasset in 2012. As residents from across the community came together in a collaborative effort to plan the first walks, they decided to limit the spread of the art walk to the village along Route 1 in town.

“It really seemed there was density here, it seemed like the right thing to do and then to invite all the businesses in town to participate,” Droby said.

Since then she has also helped to start a variety of programs in the town, including the Holiday Marketfest, the Museum in the Streets, and the Friends of Wiscasset Village. All four programs are supported by the nonprofit Wiscasset Creative Alliance, allowing the programs’ organizers to apply for grants, have bank accounts, and provide tax-deductible benefits for donations. 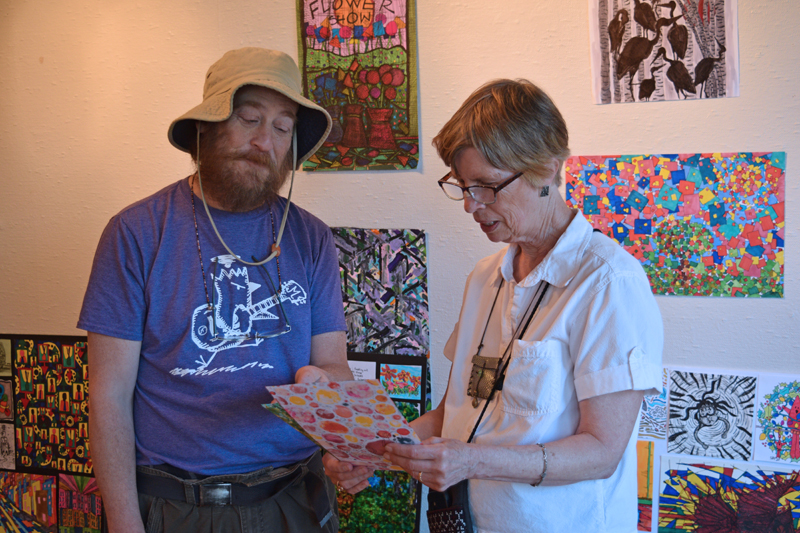 Although state mask and social distancing guidelines were only recently lifted, Droby said that the walk would have gone off without a hitch regardless. She said that during the town’s Holiday Marketfest last winter, organizers cut back on group activities like fireworks, a visit from Santa Claus, and horse-and-wagon rides to make the event doable.

“Our shops have become expert in following the state mandates, and last December we even had Marketfest, and that’s because all the shops had their requirements very clearly listed,” Droby said. “Everybody’s really happy to have doors open again.”

Celia Ludwig, a painter and member of the art walk’s creative team, was stationed at the community mural where participants could make their contributions to a beach scene on large canvas. Ludwig came up with the idea for the community mural as well as the rock-painting station, and donated all of the paint and canvas for the mural. 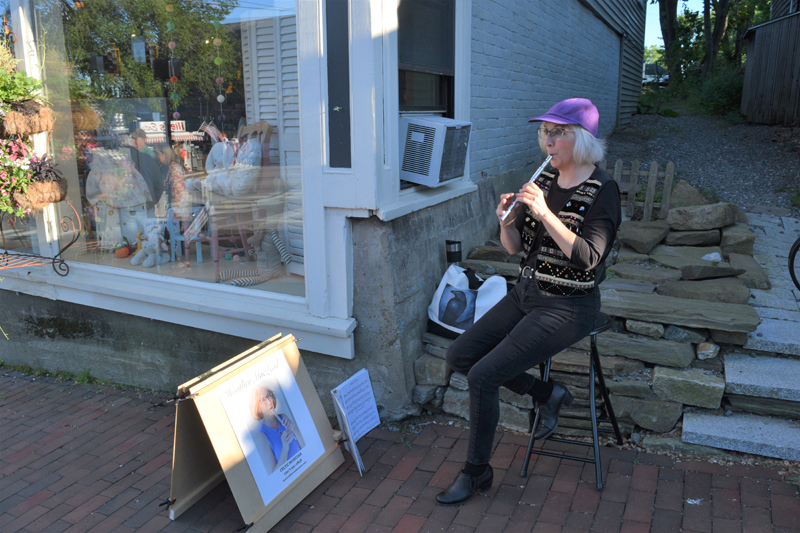 Musician Heather MacLeod plays the penny whistle outside of the pop-up Hasenfus Gallery at the Wiscasset Art Walk on June 24. (Nate Poole photo)

Ludwig, who was volunteering for her first year after participating as a vendor in years prior, said that her plan is to glaze the rocks that participants left behind and use them to decorate the bases of trees along the village’s sidewalks. She said that next month’s art walk will follow up on the rocks with an oyster shell painting station.

The art walk also featured visiting Saco artist Seth Bond Perry at the Hasenfus Gallery. Perry had never attended an art walk in Wiscasset before, but was happy to do so after Droby reached out to him on Facebook.

Perry said he was pleased with the turnout and attendees’ curiosity regarding his art, despite his difficulty with keeping some of his pieces, mostly hand-drawn, abstract prints with some cartoons and paintings, on the walls. 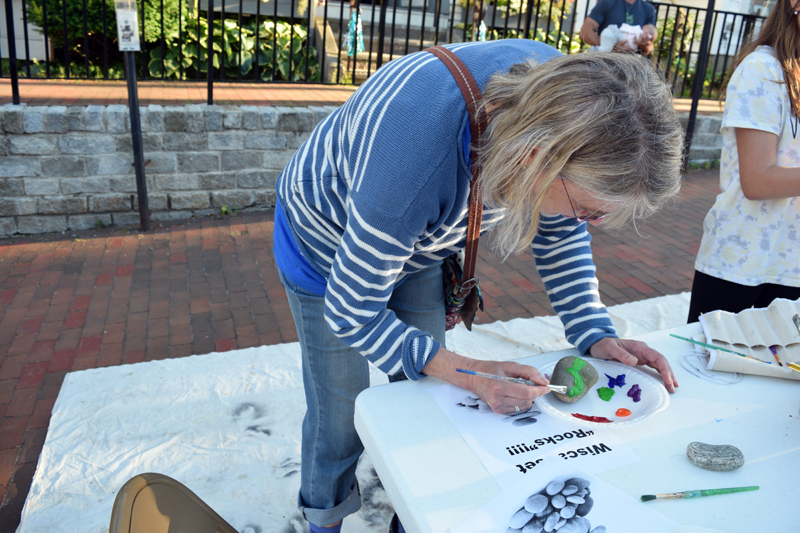 “People seem to be having a good time and they’re all very patient with the fact that gravity is getting the better of my panels,” Perry said with a smile.

Hilary Crowell was one of the vendors to set up a table at the event. Crowell owns The Cultivated Thread, a Midcoast hand-woven goods business, but she featured a number of other products from local small businesses like handmade coffee paddles and soaps to promote those that couldn’t attend.

“It’s been really lovely, it’s fun. Even going to an event in Portland versus here, it’s a different crowd of people and it’s really fun to see what kind of conversations I’m going to have,” Crowell said. “I’m excited to come to the next one and hopefully meet more people.”