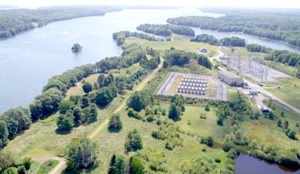 The Illinois city of Zion has asked Wiscasset to back federal legislation that would compensate municipalities where spent nuclear fuel is stored.

In a memo to the Wiscasset Board of Selectmen, officials from Zion asked Wiscasset to encourage U.S. Rep. Chellie Pingree, D-Maine, to co-sponsor the Interim Spent Nuclear Fuel Storage Site Compensation Act of 2016.

The request was presented to selectmen at their Monday, June 20 meeting, just days after it was received. Selectmen have yet to make a formal decision on whether to ask Pingree to co-sponsor the legislation on Wiscasset’s behalf.

Zion’s request came two weeks after Wiscasset, with the support of Maine’s entire congressional delegation, voiced its concern to the U.S. Department of Energy about the 542 metric tons of spent nuclear fuel that has been in storage at the Maine Yankee Atomic Power Co. site since the plant shut down in 1997.

Officials from the U.S. Department of Energy made a special trip to Wiscasset following a public input session in Boston on June 2. The public input session was 13 one of several the department held nationwide as part of its “consent-based siting process,” an effort to find an interim location for spent nuclear fuel.

One of the issues raised during the process was the inability of municipalities to sue the U.S. Department of Energy for its failure to remove spent nuclear fuel from the communities. Utility companies, in contrast, have received millions in compensation from the department.

Thirteen communities qualify as interim spent nuclear fuel storage facilities, according to the legislation, and Wiscasset is one of them. The legislation is in its draft phase and can be altered to increase its chances of passing through Congress, according to a memo from Dold, who is working on behalf of Zion.

The amount of payments and the mechanism for the distribution of payments to municipalities are chief among elements of the legislation that may be revised.

Representatives from Zion are contacting each of the 13 municipalities that qualify for compensation to encourage them to have their U.S. representatives sign on to the bill before it is introduced on the floor of the U.S. House of Representatives.

According to Town Manager Marian Anderson, outside of property taxes, Wiscasset receives no compensation from Maine Yankee for the storage of spent nuclear fuel in the town.