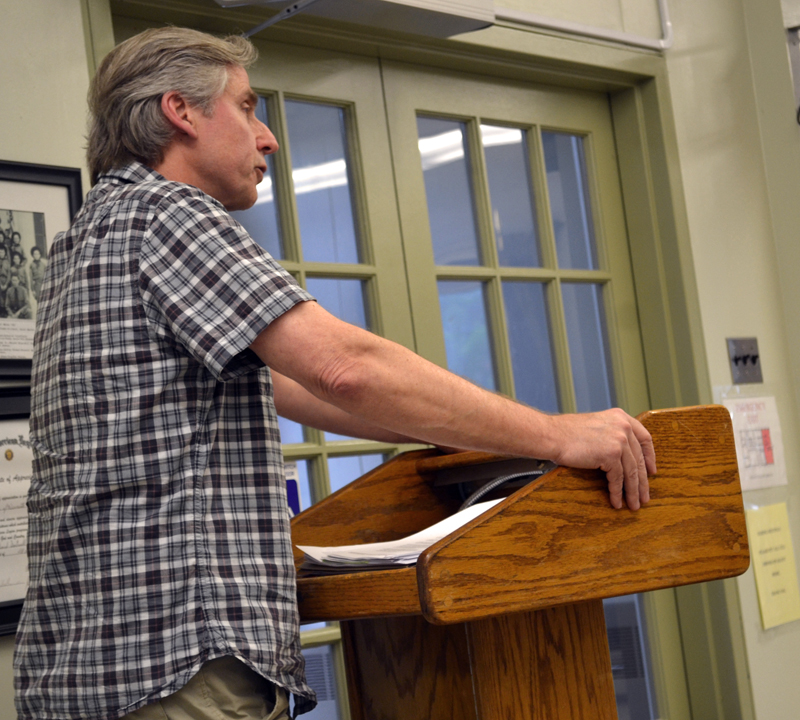 A picket fence at 4 Fort Hill Street will stand following a Wiscasset Board of Appeals decision Monday, June 19. The board voted 4-0 to overrule the Wiscasset Historic Preservation Commission’s April decision regarding the fence due to “the gray area (property owner Celeste Edwards) fell into,” board member John Blagdon said.

Edwards’ complaints about the commission contributed to the Wiscasset Board of Selectmen’s decision to begin the process of repealing the town’s historic preservation ordinance, which established the commission.

James Kochan was the only member of the historic preservation commission to attend the board of appeals meeting. Commissioner Susan Blagden is also a member of the appeals board, but recused herself from consideration of the appeal and left the meeting before it was discussed.

As Edwards responded to questions from the board of appeals, Kochan contested her answers, particularly her claim that she did not know her house was in a historic district or that she needed a certificate of appropriateness for renovation and construction projects.

Kochan also owns property on Fort Hill Street and said all property owners were notified about the historic preservation commission.

“I’m not going to listen to him lie,” Edwards said. “He’s caused me so much trouble. He’s the reason I want to move out of town.”

Shortly after purchasing 4 Fort Hill Street, Edwards had an old fence removed from the property. A new picket fence was erected in September 2016. It was not until late October that she was notified that a certificate of appropriateness was required for the fence, she said.

The Wiscasset Historic Preservation Ordinance, which voters approved in June 2015, requires a certificate of appropriateness for all renovation or construction projects before a building permit can be obtained.

There was “some lag time” between the passage of the ordinance and the creation of the Wiscasset Historic Preservation Commission, Town Planner Ben Averill said. The commission was in the process of discussing how to notify property owners of the new requirements in the ordinance at about the same time that Edwards was completing the work on her fence, he said.

The town sent a letter to all property owners in the district in October, but used the addresses on tax bills from the previous year, Averill said. Edwards’ address was not on the list.

Edwards and several of her neighbors did not receive the letter or any other notification about the commission, Edwards said.

It was not until Edwards sought a building permit for another project on her property that she was informed about the need to obtain a certificate of appropriateness, she said. The application was completed and submitted to the commission upon notification, but Edwards was unable to attend several meetings when her application appeared on the agenda.

On April 6, Edwards appeared before the historic preservation commission. While the commission approved two of her applications for certificates of appropriateness, it denied her application for the fence.

Commissioners instructed her to remove it, but did not have the authority to do so, she said.

According to Kochan, Edwards was aware that her house was a contributing structure to Wiscasset’s historic district. Edwards’ application for a certificate of appropriateness “was the smallest application ever submitted to the commission,” Kochan said, at four pages long.

The fence that was demolished was a Federal-style picket fence that had been in place with few to no alterations for more than 200 years, according to the historic preservation commission’s findings of fact.

The construction of a new picket fence ignored the standards and guidelines of the historic preservation ordinance, according to the findings of fact.

“This was a major violation of the ordinance,” which the historic preservation commission is charged with implementing equally and fairly, Kochan said.

The old fence had been altered since it was first built, Edwards said. The fence erected to replace it was similar in style to other fences in the area, she said.

“This is a big gray area and it’s turning into a he-said, she-said,” Blagdon said.

Due to the lack of notification to Edwards about the requirements of the historic preservation ordinance, and a lack of clarity in the ordinance relating to the replacement of historic structures that have been modified, the board of appeals voted 4-0 to overturn the commission’s decision.

The Fort Hill fence will be allowed to stand as is, according to the board of appeals.

While she is happy with the board of appeals’ decision, Edwards said she has been “pretty traumatized” by the situation. Edwards’ house is on the market, and she is unsure if she will continue to live in Wiscasset, she said.