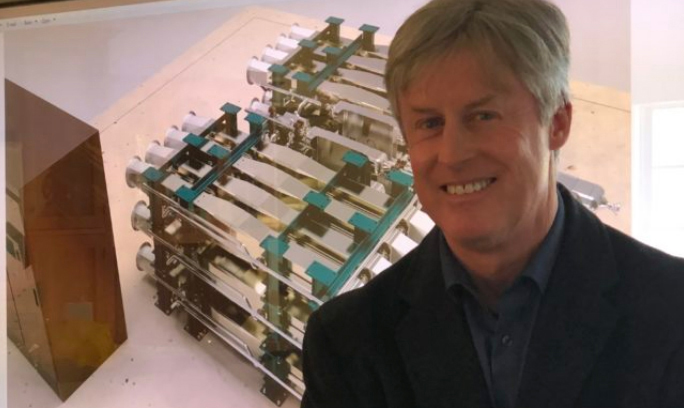 An entrepreneurial company in Wiscasset that is developing a sophisticated turbine engine that can use multiple fuels has raised $2.2 million to add staff, buy manufacturing equipment, and set up a factory.

Peregrine Turbine Technologies is gearing up for what CEO David Stapp calls a “disruptive” technology that creates electricity efficiently from fossil fuels or biomass pellets.

“We are doing technologically challenging and expensive technology development. We use high-tech alloys,” Stapp said.

“We have a solution that would allow us to generate electric power at a price competitive with natural gas-fired power and do it locally in Maine using local fuels harvested by local truck drivers and loggers,” he said. “So the money spent on the power generation will stay within the community and stimulate economic activity locally. We think there’s a huge opportunity for biomass, not only here in Maine, but all over North America and all over the world in non-developed nations.”

A turbine extracts energy from fluid and converts it into electricity. What makes Peregrine’s turbine engine different from those now in use is that it is relatively small, about the size of a breadbox. It can use multiple fuels and heat them to very high temperatures to produce electricity more efficiently, Stapp said.

The initial use will be in microgrids, in which electricity is generated at the location where it is used instead of piped over the grid, he said, thus saving costs.

Peregrine is building a whole engine, but testing each of its parts one at a time.

The turbo compressor, the part of the engine that compresses hot gas that can be turned into electricity, will soon be tested by Sandia National Laboratories, a national research and development laboratory based in Albuquerque, N.M.

“The more hours the (turbine) unit is tested at a national laboratory, the easier it will be to sell to the commercial market,” Stapp said. He expects the turbine engine to be on the market in 2020, though he expects to install some products this year and in 2019.

Gary Rochau, manager of the Advanced Nuclear Concepts Group at Sandia, said Peregrine’s system is unique in that it operates at 750 degrees Celsius (1,400 degrees Fahrenheit) instead of the 350 degrees Celsius (660 degrees Fahrenheit) of today’s systems. The turbine uses supercritical carbon dioxide, in which the carbon dioxide acts like both a gas and liquid at very high temperatures, to get the extra boost. 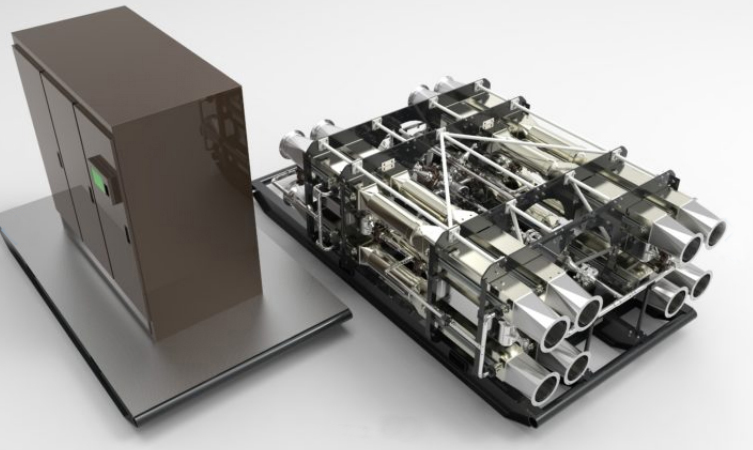 That means the current 30 percent efficiency rate of converting heat into electricity improves to 50 percent at the higher temperature, Rochau said.

“Peregrine has twice the efficiency and is 10 times smaller than a conventional steam system,” Rochau said. Peregrine and Sandia are collaborating under a cooperative research-and-development agreement.

Stapp expects his technology to be a game-changer in the electricity industry, bringing new technology into more local use.

The initial turbine will run at 1 megawatt, or 1,300 horsepower, the same as a NIO EP9 electric racing supercar. A Toyota Camry midsized car has 180 horsepower.

Once the company is in commercial production, Stapp expects fast growth.

“I expect hundreds of jobs in Midcoast Maine in three to five years with our assembly and test operations,” he said.

The company now has 14 employees and will add two more soon. One is a graduate from the University of Maine in Orono and the other is from Bennington College in Vermont.

Because Peregrine’s work is specialized, the company has to home-grow its engineers, Stapp said. He asks his veteran engineers to train workers fresh out of college.

He also is talking to some of Peregrine’s subcontractors to locate staff in Maine. They include Turbocam International, a Barrington, N.H. company that machines parts for the aerospace industry, and Vacuum Process Engineering, a Sacramento company with a high-tech welding technique.

Stapp said Peregrine closed the equity investment round March 19, bringing the total it has raised to $12.3 million since the company was founded in April 2012. He would not reveal who the investors are except to say they are both existing and new financiers.

Two years ago, Peregrine bought two model homes in the failed Mason Station LLC luxury Point East Maritime Village Development in Wiscasset. It is using the more than 5,000 square feet for offices. The town sold the property to Stapp for $200,000. The engineering operation is in one of the model homes.

Stapp is working with the town of Wiscasset to get Tax Increment Financing district designation to access additional local financing. He plans to buy more land in the former development to build out a 60,000-square-foot factory.