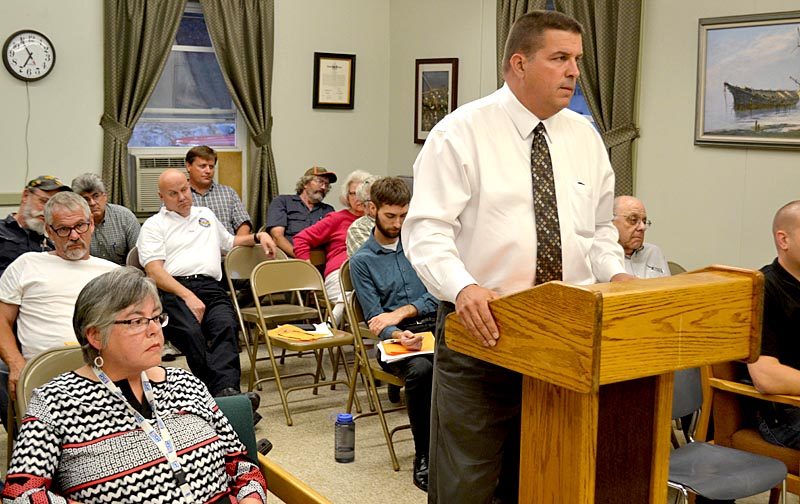 From left: Wiscasset Treasurer Shari Fredette and auditor Chris Bachman attend the Wiscasset Board of Selectmen’s Sept. 6 meeting, where selectmen voted to use $1 million from the general fund to reduce the tax commitment. (Abigail Adams photo)

The Wiscasset Board of Selectmen delayed establishing its tax rate in a special meeting Monday, Sept. 12 until the town has “hard numbers” for its surplus balance.

In a previous meeting attended by the town’s auditor, Chris Bachman, of RHR Smith, and Treasurer Shari Fredette, selectmen voted 3-2 to use $1 million of the town’s fund balance to reduce the tax commitment. Wiscasset taxpayers would see a 14 percent hike in their tax bills if the selectmen were to use $600,000 in surplus to reduce the tax commitment, an option considered at the earlier meeting. An additional $400,000 would reduce the hike in tax bills to about 12 percent, selectmen said.

The vote to use $1 million to reduce the tax commitment on Sept. 6 was taken after Bachman told the board the town had about $1.7 million in its general fund. In reconsidering the previous vote, the selectmen were unclear if the number quoted was the balance of the undesignated surplus fund, or if it includes restricted funds that cannot be used to reduce the tax commitment.

“We need to know the hard number for the unassigned, unrestricted surplus balance,” Selectman David Cherry said. “We need that answered before we sign (the tax commitment).”

“It is inexcusable that so many people left us flailing like this,” Selectman Ben Rines said. “We asked for those numbers a long time ago.”

The estimated surplus balance was a common request from Rines throughout Wiscasset’s budget-setting process. “This infuriates me,” he said. “We asked the question all year long.”

The surplus figure as of June 30, 2015 was $1.1 million, according to the previous year’s audit. According to Town Manager Marian Anderson, Fredette prepared an estimate of the amount in surplus in April in an internal document sent to selectmen. Town officials were unable to locate the estimate by press time.

“I’m not ready to sign the tax commitment with $1 million, if we only have $1.1 million,” Chair Judy Colby said.

The board voted 4-1, with Selectman Jeff Slack opposed, to postpone signing the tax commitment and establishing the mil rate until the board of selectmen’s Tuesday, Sept. 20 meeting. Slack expressed confidence that the money was there and available to use.