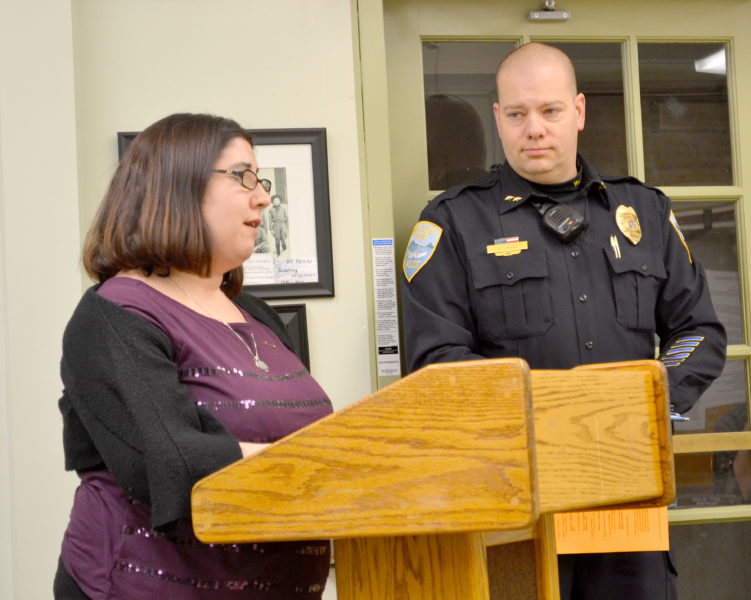 Ward Brook Road resident Holly Giles speaks in favor of a disorderly housing ordinance as Wiscasset Police Chief Jeff Lange looks on during a meeting of the Wiscasset Board of Selectmen on Tuesday, Jan. 3. (Abigail Adams photo)

Concerns about a pit bull attack on Ward Brook Road in Wiscasset in early December culminated in a request for a disorderly housing ordinance, a tool that would enable law enforcement to take action against several residences that have been an “ongoing problem” for law enforcement, Wiscasset Police Chief Jeff Lange said.

After hearing from several Ward Brook Road residents who said they were in daily fear for their safety, the Wiscasset Board of Selectmen, at its Tuesday, Jan. 3 meeting, voted unanimously to direct the ordinance review committee to develop a disorderly housing ordinance.

Selectmen asked that the ordinance be developed quickly so it can be brought before the town at a special town meeting that will be scheduled to consider a moratorium on retail marijuana shops and social clubs. (See “Wiscasset moves forward with marijuana moratorium.”) 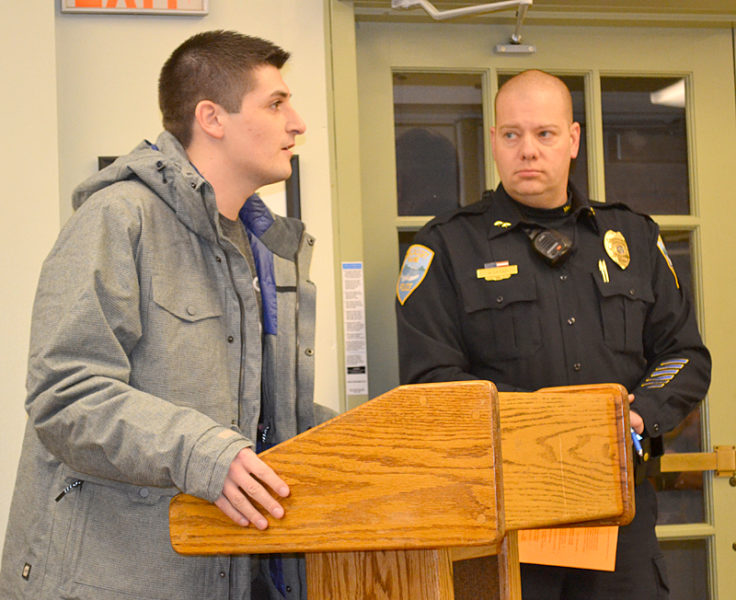 Nick Buscanera, whose dog was attacked by pit bulls, asks the Wiscasset Board of Selectmen to support a disorderly house ordinance at the board’s Tuesday, Jan. 3 meeting, as Wiscasset Police Chief Jeff Lange looks on. (Abigail Adams photo)

Lange presented selectmen with a draft disorderly housing ordinance and copies of ordinances in place in Sanford, Rockland, and Wilton that have proven successful in the court system, he said.

The draft ordinance defines a disorderly house as a residence determined to “unreasonably disturb the community” for conduct that includes loud music, boisterous parties, illegal drug use, fights, or the arrests of owners or tenants for activities in the dwelling.

The Wiscasset Board of Selectmen would have the authority to deem a residence a “disorderly house” after a public hearing that would be scheduled if police respond to a certain number of complaints about the residence within a 30-day time frame, according to the ordinance. The number of complaints that would trigger the public hearing ranges from two to five based on the number of people who live in the house.

If a house is deemed to be disorderly, the town could enter into a consent agreement with the owner of the house. Violations of the consent agreement could result in civil penalties of $100 to $2,500, according to the draft ordinance.

The ordinance would not only be an extra tool for law enforcement, but would also enable landlords to work with their tenants to “keep them contained,” Lange said.

The idea for the ordinance grew out of a community meeting Lange held with residents of Ward Brook Road shortly after a pit bull attack on a smaller dog on the road sent a woman to the hospital.

The two pit bulls, owned by Nicholas Martinez, 39, and Robin Standring, 50, escaped the yard and attacked a small dog, resulting in a veterinary bill of $575.25. A neighbor who attempted to intervene was bitten by the pit bull and went to a hospital for treatment.

Tensions have escalated between neighbors and the household since the incident, Ward Brook Road residents said, with several residents turning out to the selectmen’s meeting to speak in favor of the ordinance.

Many residents said they will not let their children walk to the bus stop or play outside due to concern about the residence, which they said is frequently a source of parties, physical altercations, and other nuisances.

Nick Buscanera, the owner of the small dog that was attacked, said he now walks his dog with a hammer. “I’m fed up with it,” Buscanera said. “Whatever it takes to make it stop. We need to make it safe again.”

Fulton Oakes was the only Ward Brook Road resident in attendance to speak out against the ordinance, which he said could result in neighbors filing frivolous complaints against each other. “Anyone could be upset with me for running a tractor too early or leaving an alarm clock on,” Oakes said.

“We shouldn’t make this a general rule as open as a nuisance order. Let it be on a case-by-case basis,” Oakes said. “Not everyone should have to pay the penalty.”

Even if the town adopts the draft ordinance without changes, the Ward Brook Road residence in question would not trigger a public hearing because neighbors have not called the police department often enough with complaints, Lange said.

Many residents said they did not call out of fear of retaliation. Some said the community meeting with the police department helped. One resident said it made her realize she was not alone.

Lange encouraged anyone to contact law enforcement with concerns about a household in their neighborhood.

Standring and Martinez could not be reached for comment by press time.