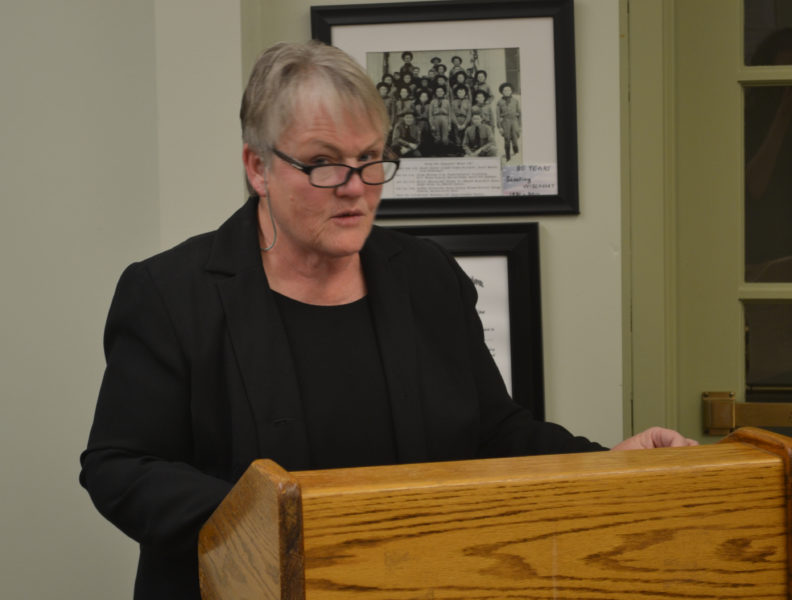 Marge Kilkelly, senior policy advisor to U.S. Sen. Angus King, speaks with the Wiscasset Board of Selectmen on Tuesday, Nov. 15 about a proposal to form an alliance with other communities dealing with nuclear waste. (Abigail Adams photo)

King’s office hopes to build on that energy and push the Department of Energy’s process along through the creation of an information-sharing network between the 13 municipalities that have served as de facto nuclear storage sites since nuclear power plants in those communities went offline.

In addition to bringing together affected communities, the proposal calls for a technical analysis of the transportation infrastructure surrounding each site to determine how to move spent nuclear fuel once a permanent home is identified.

Kilkelly outlined the proposal to the Wiscasset Board of Selectmen on Tuesday, Nov. 15 to determine if it would help address the town’s concerns.

“This is exciting,” Selectman Jeff Slack said. Although the board did not vote on the matter, selectmen encouraged Kilkelly to work with other U.S. senators to form what Kilkelly informally referred to as “the spent nuclear storage facility community alliance.”

The Maine Yankee site in Wiscasset has been home to about 542 metric tons of spent nuclear fuel since the plant was closed in 1997. The Department of Energy was never able to follow through with its promise to remove the nuclear waste from Wiscasset, in part due to problems with identifying a permanent home for it.

Department officials have said a top-down approach that resulted in the selection of Yucca Mountain in Nevada as a repository site for nuclear waste failed.

As a result of a 2012 report by the Blue Ribbon Commission on America’s Nuclear Future, the Department of Energy has adopted a consent-based process to find a permanent home for the country’s spent nuclear fuel.

Department of Energy officials toured the country this past summer to hear feedback from affected communities as part of the consent-based siting process and made a special stop in Wiscasset.

Following the Department of Energy’s meeting in Wiscasset, the town was approached about supporting legislation sponsored by U.S. Rep. Robert Dold, R-Illinois, which focused on providing financial compensation to the 13 municipalities currently storing nuclear fuel.

The Dold legislation “was a great idea,” Kilkelly said, but it required municipalities to apply annually to receive compensation and did not address the multiple communities that will soon have decommissioned nuclear power plants.

The legislation was not successful, and would need to be reintroduced for consideration in the next legislative session, Kilkelly said.

“How to get the waste moved is the ultimate question,” Kilkelly said. The consent-based process, which begins by asking communities if they would like to host a nuclear waste repository, “makes sense,” Kilkelly said.

While there are several legislative and budgetary challenges to identifying a different location than Yucca Mountain, there are communities that are interested in hosting a repository, Department of Energy officials have said.

“We don’t know where the waste is going, but we know where it is,” Kilkelly said. Communities with nuclear waste will be one step closer to moving it when a permanent site is found, if the infrastructure improvements that will be needed to transport it are identified now, Kilkelly said.

As more communities join the ranks of de facto nuclear waste storage sites, the alliance will help affected communities learn from each other, Kilkelly said.

“It’s an enormous challenge,” Kilkelly said. “The jobs are not here, the tax revenue is not here, but the waste is.”