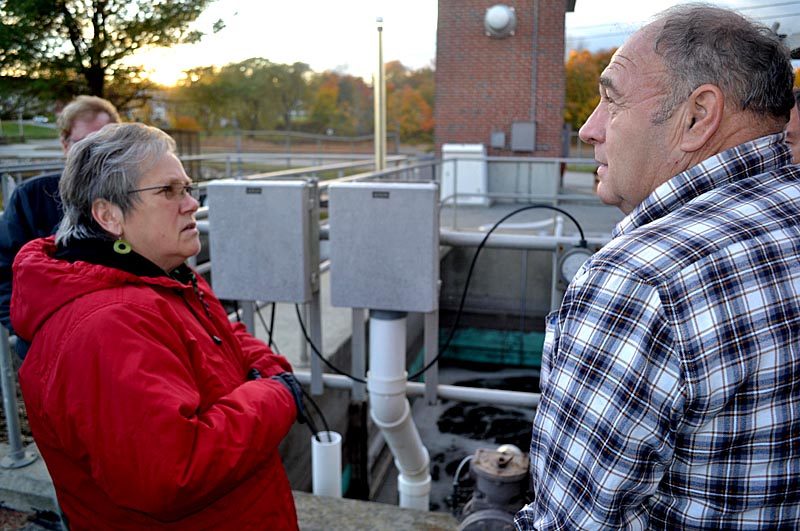 Wiscasset Selectman Judy Flanagan (left) and Wiscasset Wastewater Treatment Plant Superintendent Buck Rines stand in front of an aeration tank on Monday, Oct. 24. The tank was the subject of a problem at the plant that may result in a fine from the Maine Department of Environmental Protection. (Abigail Adams photo)

The Wiscasset Wastewater Treatment Plant is facing a Maine Department of Environmental Protection fine for violations resulting from a malfunction of the plant’s processing system in 2015.

In September 2015, the town of Wiscasset entered into an administrative consent agreement with the DEP and the Maine Attorney General’s Office to correct a series of violations discovered during an annual inspection of the facility months earlier.

The total monetary penalty levied by the state in the initial consent agreement was $18,260; however, negotiations with the state are ongoing and the fine may be reduced when Wiscasset and the state finalize the agreement, Wiscasset Wastewater Treatment Plant Superintendent Buck Rines said.

In May 2015, about a week before the plant’s annual DEP inspection, there was a problem with the system that was not reported to the DEP as required, according to the consent agreement. Some of the tanks that process wastewater needed more air and could not get it, Rines said.

According to the consent agreement, the plant also exceeded its limit for output, or treated wastewater, that can be discharged into the Sheepscot River.

Due to calculations that did not follow DEP standards, bacteria results required for monthly reports were incorrectly reported in May, June, and July 2015, according to the consent agreement.

The treatment plant has taken a series of required corrective actions, according to a memo from Town Manager Marian Anderson to the DEP.

The treatment plant was in the process of upgrading its system through a $1.2 million grant from the U.S. Department of Agriculture when the problem with the system occurred, Rines said. Problems with diffusers in the processing tank were part of the reason the tank was not getting enough air, he said.

Those diffusers have since been replaced, Rines said. Their replacement was already a part of the laundry list of upgrades the treatment plant planned to make with the USDA grant, and were moved up the list, he said.

Testing of bacteria and fecal levels has been outsourced since July 2015, Anderson wrote in the memo.

On the last stop of its weekly tours of town departments to prepare for the 2017-2018 budget process, the Wiscasset Board of Selectmen met with Rines Monday, Oct. 24 for a tour of the treatment plant to learn about plant needs.

Rines showed selectmen the “aeration tanks” at the heart of the 2015 issues and the diffusers that have been switched out to feed the tank enough oxygen to properly treat the wastewater.

The doors to several of the buildings at the treatment plant are corroded, and the mortar holding the bricks in place is starting to fail, Rines said. One of the largest capital improvement projects the treatment plant may need, however, is an extension of the outfall pipe, which delivers treated wastewater into the Sheepscot River, Rines said.