Vendors set up on the lawn in front of the Maine Tasting Center during the Wiscasset Farmers’ Market on Wednesday, June 2. (Nate Poole photo)

The roar of traffic on Route 1 accompanied folk music and fresh produce on Wednesday, June 2 as the Wiscasset Farmers’ Market opened the season at its new location, the Maine Tasting Center at 506 Old Bath Road in Wiscasset.

After featuring five vendors last year, the market will host a total of 14 this summer, selling meats, cheeses, baked goods, coffee, veggies, maple syrup, and even Colombian street food. The market will be open from 3-6 p.m. every Wednesday.

Lyons explained that while the market’s spot at the Wiscasset waterfront in past years was beautiful, it didn’t have enough space to expand the market and welcome more vendors. In addition, it wasn’t nearly as visible to tourists and others traveling through Wiscasset. 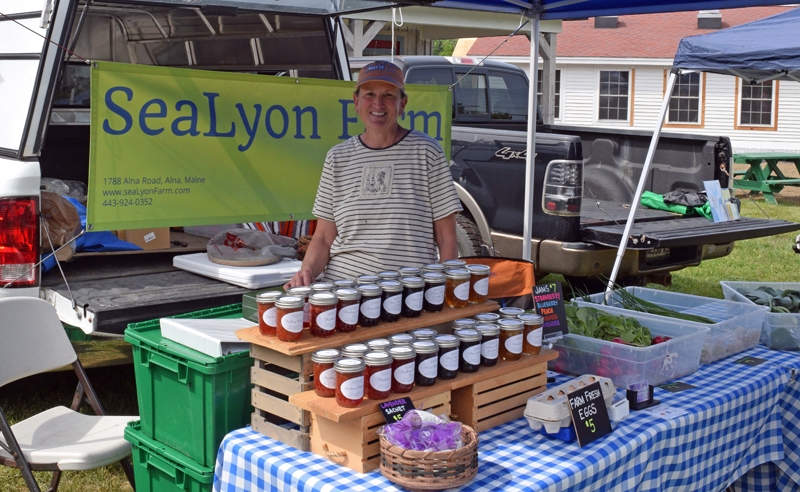 Marcia Lyons, president of the Wiscasset Farmers’ Market, stands in her tent at the market on Wednesday, June 2. Lyons co-owns SeaLyon Farm, of Alna, with her husband Don. (Nate Poole photo)

“The waterfront was a good location but only the locals knew that we were over there. Here we’re more exposed to tourists,” Claudia Sortwell said.

Sortwell founded the market three years ago and previously served as president. She stepped down from the role last year to open up the opportunity for other participants to bring their own skills to the role and contribute to the market’s development.

Andrew Gross, president of the Maine Tasting Center, contacted Sortwell last year and offered to host the farmer’s market in front of his new business on Route 1, Sortwell said.

The tasting center will host a variety of events and feature a brewery-style tasting room, a learning center with a demonstration kitchen and classroom, and a discovery center highlighting food and drink associations in Maine. The business will open in July, according to its website.

While the market hosted more farmers’ than ever before on Wednesday, not all 14 of the advertised vendors were able to make it. Sortwell said that many farmers have struggled to find employees to work on their farms, let alone man their tents at the market. Sortwell herself was selling mushrooms from Oyster Creek Mushroom Co. at her own table because they could not find anyone to run their own table. 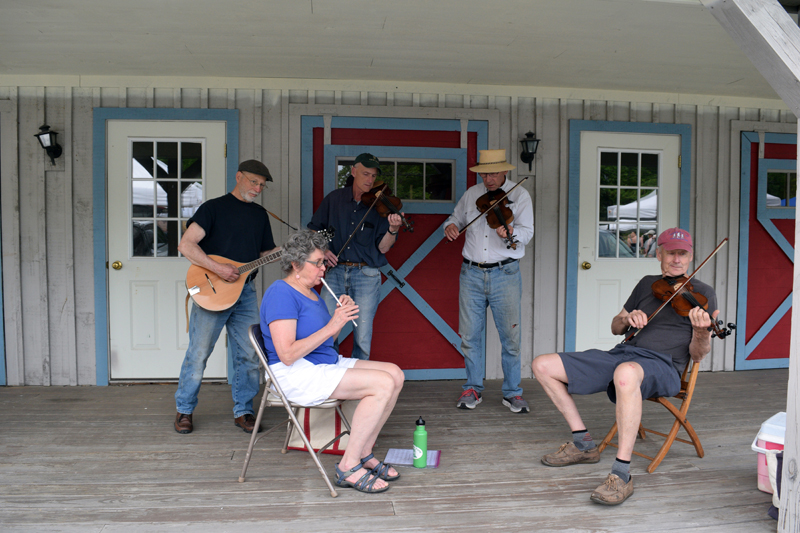 Folk musicians perform on the front porch of the Maine Tasting Center at the Wiscasset Farmers’ Market on Wednesday, June 2. (Nate Poole photo)

“I said, ‘bring them, I am going to sell them for you,’ because they didn’t have people, so they couldn’t join the market,” Sortwell said.

Allison Lakin, owner of Lakin’s Gorges Cheese in Waldoboro, had intended to make an appearance at the market for the first time this season, but could not find the requisite help.

“I very much wanted to participate in the Wiscasset market, and we’re going to have to put that on hold for a minute,” Lakin said during an interview at East Forty Farm. “Coming off a pandemic, one wants to still be trying to earn money in all the places that you possibly can.”

Despite staffing issues, Sortwell said that she believed the market would continue to grow. She said that while farmers’ have been hesitant to join the market at the waterfront in the past, they had seen a significant uptick in interest going into this year.

“Now they have heard that we are doing well, so more people are trying to join us,” Sortwell said.

For more information about the Wiscasset Farmers’ Market, go to wiscassetfarmersmarket.com or find the market on Facebook.