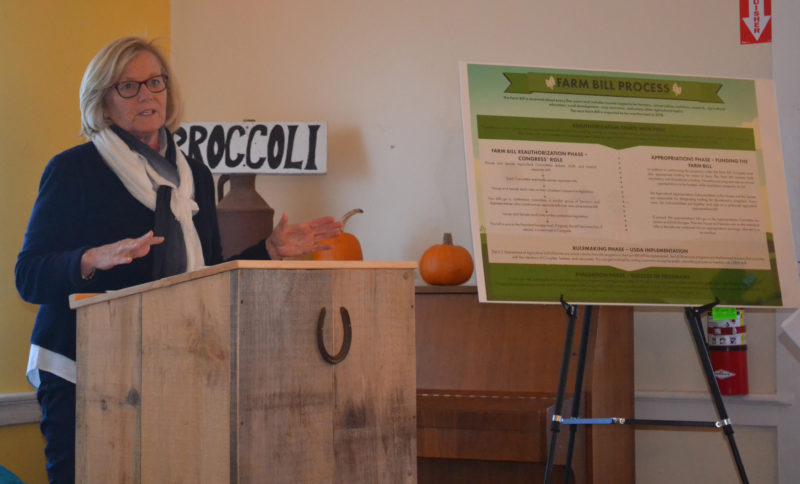 U.S. Rep. Chellie Pingree hosts a forum on the upcoming reauthorization of the Farm Bill at The Morris Farm in Wiscasset on Friday, Nov. 18. (Abigail Adams photo)

There were a variety of complex interests involved in the 2014 Farm Bill, which will allocate about $466 billion over a five-year period to U.S. Department of Agriculture conservation, food-assistance, and agricultural programs, U.S. Rep Chellie Pingree, D-Maine, said during a forum at The Morris Farm in Wiscasset on Friday, Nov. 18.

More money is spent and more lobbyists are dedicated to influencing food and agricultural policy on Capitol Hill than on the defense industry, she said

In 2018, the Farm Bill will again go through Congress for reauthorization. To ensure the voice and priorities of Maine’s agricultural community are reflected in the 2018 Farm Bill, Pingree hosted Friday’s forum, and is continuing to solicit feedback from constituents to take to Washington.

While USDA programs have paid little attention to the organic food movement, it is now a $42 billion market, Pingree said. Maine is “on the right side of the issue” when it comes to the growing organic food industry and local agriculture, Pingree said.

The amount of conservation land and the number of young and female farmers are increasing in Maine, and consumers are willing to pay more if it means supporting local agriculture, she said.

Her goal in working on the future Farm Bill is to ensure the USDA is “on the right side of the issue too” and directs more resources to programs supporting local and sustainable agriculture, as opposed to subsidies supporting corporate agriculture, she said.

Morris Farm Co-president Merry Fossel said she was grateful the nonprofit, educational farm was asked to host the event and thanked Pingree for being “a tireless advocate on food- and farm-related issues.”

Pingree was joined by four panelists that each shared their own story of the benefits experienced from what one speaker described as “a little nugget of funding” from the USDA.

Emilie Knight, of the Maine Federation of Farmer’s Markets, spoke about a USDA program to encourage the use of Supplemental Nutrition Assistance Program benefits, also known as SNAP or food stamps, at farmers markets, community-supported agriculture programs, and farm stands.

SNAP benefits account for more than 85 percent of the 2014 Farm Bill, Pingree said. Efforts to restrict the food and household items that can be purchased with them have been a hot political topic in several states, according to media reports.

The Food Insecurity Nutrition Incentive Grant, branded in-state as Maine Harvest Bucks, increases the amount of money provided through SNAP if it is spent on fresh produce at participating farmers markets, Knight said.

The program has not only increased the number of consumers for local farmers, but has also greatly increased access to quality food for SNAP recipients, Knight said. 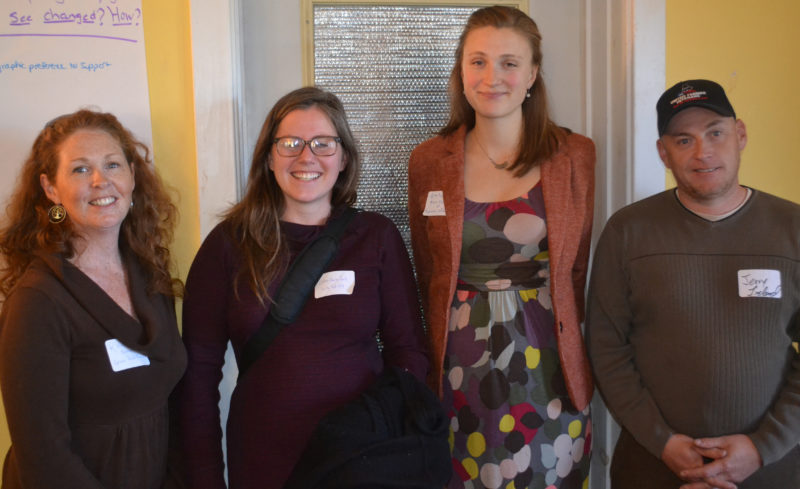 From left: Rhiannon Hampson, Colleen Halon-Smith, Emilie Knight, and Jerry Ireland spoke about the benefits of Farm Bill grant programs that have supported their projects during a forum about the reauthorization of the bill at The Morris Farm in Wiscasset on Friday, Nov. 18. (Abigail Adams photo)

Knight read a statement from a SNAP user who began to shop weekly at a farmers market as a result of the incentive. The woman realized the incredible impact the program had on her family’s life and diet when they could not attend the market one week and had to reincorporate processed foods into their diet, Knight said.

The incentive program is one that Colleen Halon-Smith said she is “eternally grateful for.” Formerly involved with introducing SNAP benefits to farmers markets, Halon-Smith is now working to collect, market, and distribute meat, dairy, and produce from Maine farms throughout New England through the Unity Food Hub.

Founded through a USDA grant, the hub is “amplifying a small amount of funding” to connect local farmers to a wider wholesale market, and increase distribution through the establishment of drop-off locations, accessible to SNAP beneficiaries, throughout the state, Halon-Smith said.

While the funding is miniscule compared to the rest of the farm bill, it is having a tremendous impact, she said.

Jerry Ireland, owner of Ireland Hills Farm and executive director of the United Farmer Veterans of Maine, successfully lobbied the Natural Resources Conservation Service to designate a small percentage of its financial assistance program to veterans who are beginning farmers.

The effort was launched as a result of Ireland’s own frustrations as a new farmer navigating the grant process; the earmark for beginning veteran farmers is now being examined by other states, he said.

While modest, the financial assistance is spurring an agricultural movement directed by veterans that “brings purpose back” and helps heal some of the wounds of war, he said.

The loan and grant programs described by the panelists make up a small percentage of the funds allocated through the Farm Bill, and competition is stiff, with hundreds of applicants for every grant or loan awarded, Pingree said.

Members of the audience, many of whom were local farmers, pointed to a variety of issues they would like to see addressed in the next Farm Bill.

The lack of a centralized source for farmers to learn about USDA grant and loan programs, the transportation infrastructure problems that create a bottleneck for distribution, the international competition at retail stores, and the difficulty in earning a livable wage and preparing for retirement were among the issues touched on by the audience.

The regulatory requirements in processing organic meats and produce, and the uncertainty surrounding the USDA discretionary funding programs that require Congressional authorization annually, were also mentioned.

The future dynamic in Washington is uncertain, Pingree said. The 2018 Farm Bill will be the first developed in a Republican-controlled House and Senate since the 1950s.

Sometimes the smallest comments, such as pointing out the arcane language that prevents flexibility in the distribution of a loan or grant, will have the greatest impact when redrafting the legislation, Pingree said.

Pingree encouraged the public to stay in touch with her office and keep the comments coming. To submit a comment, email rep.chellie.pingree@mail.house.gov.