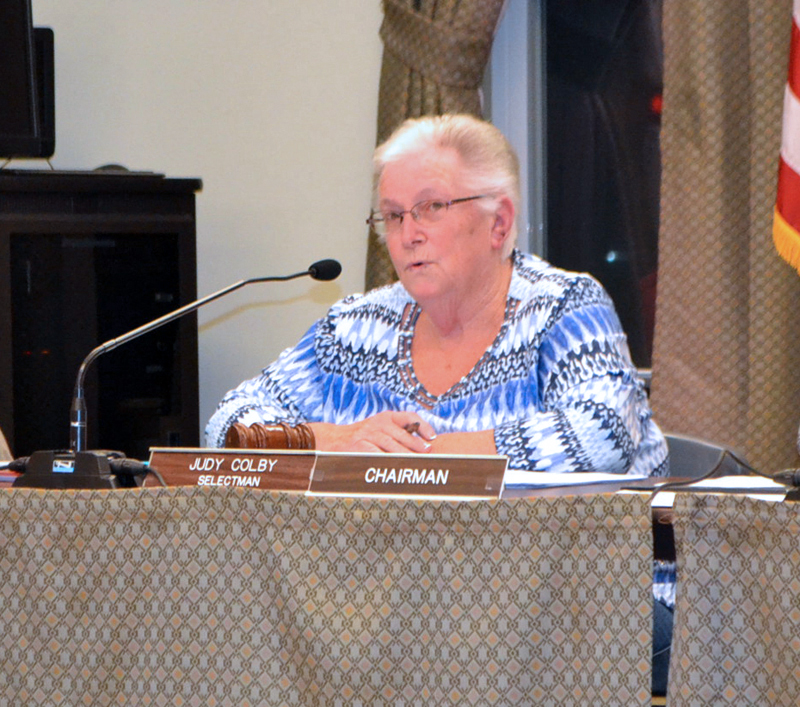 Wiscasset Board of Selectmen Chair Judy Colby calls for a referendum vote on whether the town should continue its lawsuit against the Maine Department of Transportation. (Charlotte Boynton photo)

Wiscasset voters will decide whether to move forward with the town’s lawsuit against the Maine Department of Transportation in a referendum.

The meeting room at the Wiscasset municipal building was nearly at capacity for the Wiscasset Board of Selectmen’s meeting Tuesday, Feb. 20. During the meeting, Selectman Judy Colby made a plea for a referendum vote instead of an open town meeting.

The town’s lawsuit against the DOT concerns the latter’s downtown project known as Option 2. The project includes the demolition of Haggett’s Garage and the elimination of parking on Main Street.

“I was reminded at the selectmen’s meeting the other night that we, as a board, work for all the people, not just a select few,” Colby said. “I believe it is time for us to step back, have a referendum ballot vote instead of an open town meeting, and ask the voters if they want to move forward with the lawsuit. The people need to have their voices heard.”

Colby said the Maine Business and Consumer Court has extended the time for a hearing on a preliminary injunction against the DOT to April 9, which will allow enough time for a referendum vote.

After Colby’s remarks, she made a motion for a referendum vote to loud applause from several members of the public. The motion carried 5-0.

During discussion on the motion, the selectmen and several members of the public spoke in favor of the motion. There were no comments against the motion.

The discussion included the importance of the wording of the referendum question. The consensus was that the wording should be simple and straightforward. 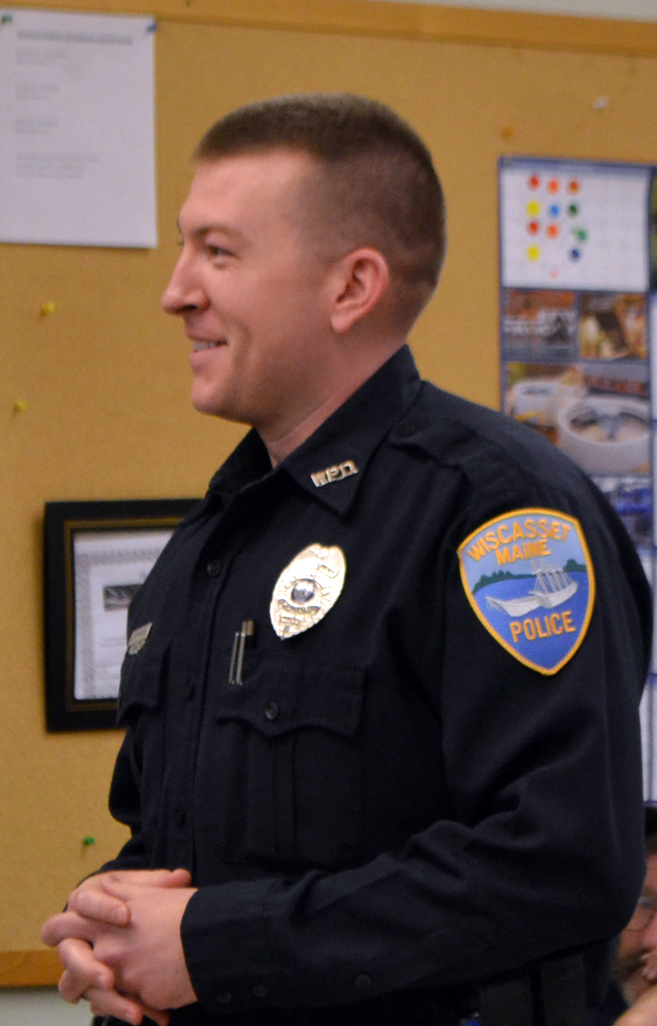 Officer Allan Torrance attends the Wiscasset Board of Selectmen’s meeting Tuesday, Feb. 20. A new addition to the Wiscasset Police Department, Torrance is a nine-year veteran of the U.S. Army. (Charlotte Boynton photo)

Town Manager Marian Anderson gave an update on the town’s legal issues. The town will not file a brief in a lawsuit by a downtown property owner against the DOT that names the town as a party of interest.

Anderson said the legal documents from the town’s suit against the DOT are available on the town website for the public to review.

The selectmen did not take action on three rate calculations for Edgecomb and Westport Island from Wiscasset Ambulance Service Director Toby Martin.

Martin also provided the “noncollectable” debts from each of the four towns Wiscasset Ambulance served in 2017.

The selectmen will decide the rates the town will offer Edgecomb and Westport Island for ambulance service during the budget process that will begin Tuesday, Feb. 27.

Wiscasset Police Chief Jeffrey Lange introduced Officer Allan Torrance. Torrance is a nine-year veteran of the U.S. Army. He married a Wiscasset girl and they have four children. Torrance said he and his wife have traveled all over the world and wanted to settle in Wiscasset. 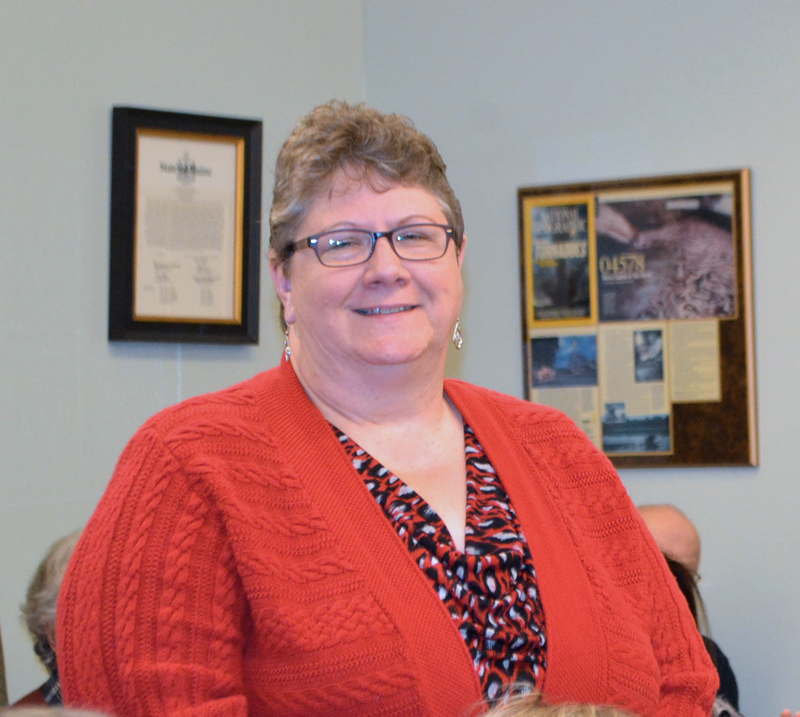 The Wiscasset selectmen will hold their first budget meeting Tuesday, Feb. 27. The selectmen will discuss the ambulance, fire, police, and waterfront budgets. On Thursday, March 1, they will review the transfer station and wastewater budgets.

Other meeting dates include March 5, March 8, March 13, and March 18. All the meetings will take place in the meeting room of the municipal building from 6-8 p.m.

The selectmen received a request from Nick Dalton for $1,280 because the town removed his artwork from town property. After a brief discussion, the selectmen voted to notify Dalton, through his attorney, that they will not make the payment.

According to the selectmen, Dalton did not remove the artwork by the deadline and several attempts to contact him were unsuccessful. Therefore, the town removed the artwork. 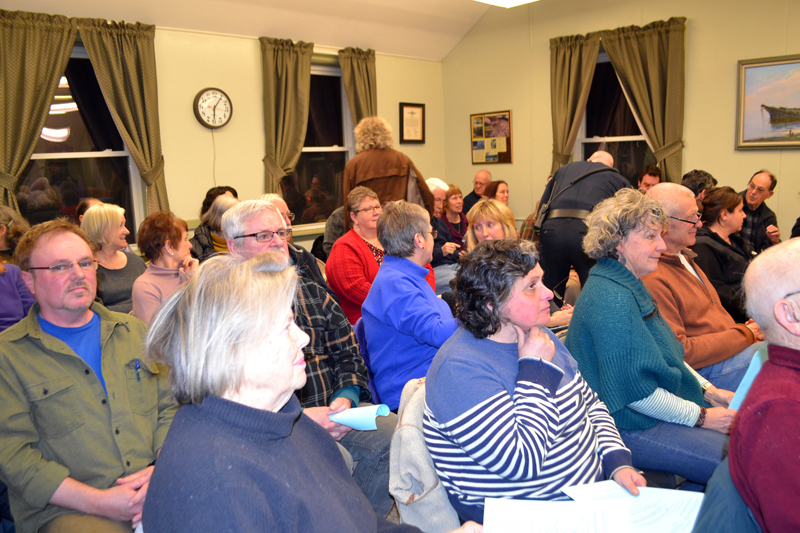 Members of the public fill the meeting room at the Wiscasset municipal building for the Wiscasset Board of Selectmen’s meeting Tuesday, Feb. 20. (Charlotte Boynton photo)

The First Congregational Church of Wiscasset received the OK from the selectmen to use the town dock for an Easter sunrise service.

The selectmen authorized the town manager to sign a one-year contract with Pyro City for the fireworks for the Fourth of July celebration at a cost of $8,000.