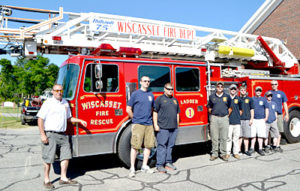 After about a year out of town for repairs, the Wiscasset Fire Department’s ladder truck is back in service. The truck made its public comeback in Wiscasset’s Fourth of July parade. The truck had been out of service since losing a rear wheel during a June 2015 training exercise.

Some questioned whether the repairs to Ladder Truck 1 were worthwhile due to the cost of parts and repairs to the 1989 ladder truck driving the department to over-expend its budget two years in a row.

“I was one of them,” Deputy Fire Chief John Merry said. “For awhile I thought we were dumping money into a bottomless pit. But the membership felt strongly about putting (the truck) back into service,” he said.

Fire Chief T.J. Merry followed the wishes of the membership and new tires, rims, bearings, lugs, and lug nuts were added to the ladder truck. 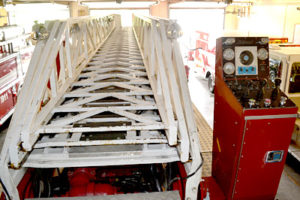 Due to the accident that took the ladder truck out of service, all fire trucks in the department now feature lime green indicators around the lug nuts to indicate if there is a potential problem with the wheel, John Merry said.

The truck was taken out of service following what T.J. Merry called “a crazy accident” in June 2015. While out on a driver’s training exercise on Gardiner Road, the truck’s rear wheel came off the vehicle; hit a utility pole, knocking out power to large parts of Wiscasset; and rolled across a parked car before coming to a rest.

The wheel fell off because of a problem with the lug nuts, but no cause or reason for the lug nuts’ failure was discovered, John Merry said. The department’s safety officer, David Gagnon, led the effort to install indicators on all the wheels of the department’s trucks following the incident, he said.

The ladder truck is the oldest truck in the Wiscasset Fire Department’s fleet. The truck was purchased by the department in 1989, and is one of only a few ladder trucks in Lincoln County.

The ladder has the potential to extend up to 75 feet with a built-in hose giving it the ability to both “reach and spray,” John Merry said. In the past, the ladder truck has been used mostly for chimney fires as a safer alternative to regular ladders, especially with icy roofs in winter, John Merry said.

Despite the issues with the control panel for the ladder, the truck still serves a valuable purpose as a pumper truck capable of supplying water to all responding fire trucks at an emergency scene, John Merry said. “If there’s a major fire, it can act as a hydrant to other trucks,” he said. “Even without the ladder it has a purpose.”

The ladder truck was taken out for training before officially being put back into service, and “everything worked flawlessly,” John Merry said. The department washed and polished the truck in preparation for the parade, the truck’s first official duty since returning to service.

“We want to show our appreciation for how supportive people have been,” John Merry said. “Things are getting resolved.”