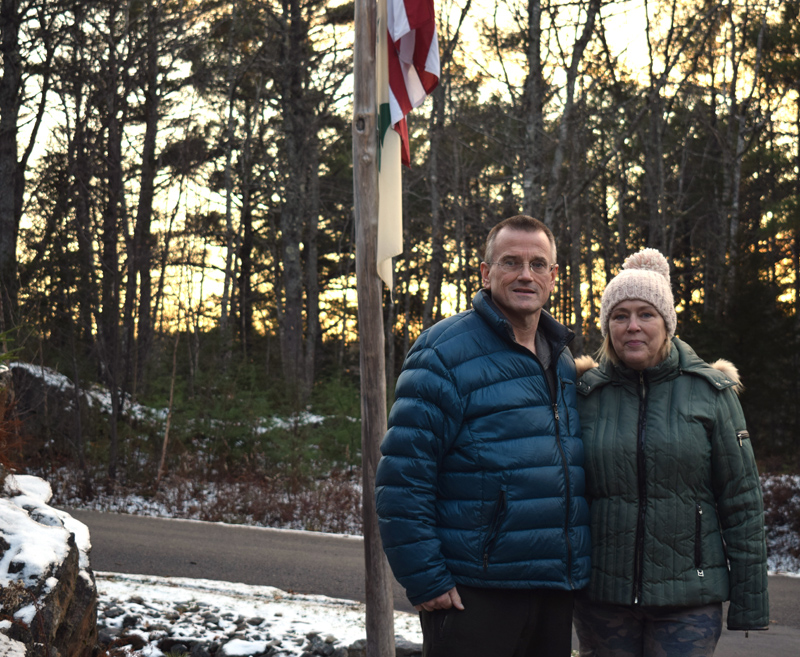 Richard and Susan Kubler stand outside their home in Wiscasset on Friday, Nov. 15. Richard, a member of the Hackensack Fire Department in New Jersey, has stage 4 liver cancer, likely a result of exposure to toxic chemicals at ground zero after the 9/11 terrorist attacks. (Evan Houk photo)

A Wiscasset man undergoing treatment for an aggressive cancer linked to his work at ground zero after the 9/11 terrorist attacks is encouraging blood and platelet donations to help others with the same disease.

Richard Kubler, 52, has been a member of the Hackensack Fire Department in New Jersey since 1998. He was diagnosed with stage 4 liver cancer last month. His doctors believe it is related to his exposure to toxic airborne chemicals at ground zero.

Now, Richard is pushing for donations of blood and blood platelets to lessen a nationwide shortage of both. He said he could not undergo certain tests because there were not enough platelets available to clot his blood.

“We want to see that anyone that goes to the hospital – family member, relative, somebody from the town – doesn’t go through what I had to go through. You don’t want to be laying there in the hospital and be told there’s not enough blood, not enough platelets,” Richard said.

According to the Mayo Clinic, platelets are colorless blood cells that help blood clot. Certain cancers, chemotherapy, and other conditions can cause low platelet counts.

Platelets only live for about 10 days in the body and have a shelf life of about five days when donated, making them a difficult resource to preserve for use in medicine.

Richard said his entire department volunteered to help at ground zero after the attacks. He worked in the mass of debris from the fallen twin towers, known as “the pile,” for four straight days, digging through the rubble to search for survivors or human remains.

“From a personal experience, it’s just beyond what I could have ever expected; it was bad,” Richard said, visibly uncomfortable talking about his experience.

The Kublers’ community and every town around them in New Jersey were affected by the attacks.

“It was pretty horrific,” said Susan Kubler, Richard’s wife. “There’s not a town around that doesn’t have a memorial to them, you know, because it was all locals.”

The dust cloud from the debris covered everything and everyone in the area for days.

Doctors with the World Trade Center Health Program, created as part of the federal James Zadroga 9/11 Health and Compensation Act of 2010, have linked ground zero exposure to nearly 70 types of cancer, many more aggressive than normal.

According to the program, more than 37,000 people have at least one medical condition related to the 9/11 attacks.

The Los Angeles Times reported in 2017 that since the World Trade Center Health Program began in 2011, more than 1,300 people in the program have died, although not all those deaths can be directly contributed to exposure at ground zero.

“We know he didn’t have cancer two years ago, because we have a CAT scan that proves it,” Susan said, referencing the rapidity of the cancer’s growth.

Richard was diagnosed Oct. 4, “a day that is ingrained in my brain,” she said.

Richard had sought treatment for what he thought was an intestinal bleed linked to his diverticulitis. The doctors never discovered where the bleeding was coming from, but they did find out he had stage 4 liver cancer.

According to the Cancer Treatment Centers of America, stage 4 liver cancer is the most advanced type that has spread to nearby lymph nodes and may have grown into nearby blood vessels or organs.

Richard started treatment at the Dana Farber Cancer Institute in Boston and is now receiving immunotherapy treatments with Keytruda at the New England Cancer Center in Topsham.

“There’s no cure for it. They can’t do surgery, they can’t do chemo. They can do this immunotherapy to boost my immune system, but it’s not going to cure the cancer. It’s going to help my body, to some extent, deal with it,” Richard said.

The Kublers bought their house in Wiscasset about a year and a half ago. Susan has been living there ever since, establishing residency for when Richard retires. The couple is now living there together as he undergoes treatment in Topsham.

The Rev. Joshua Fitterling, of the First Congregational Church of Wiscasset, which the couple attends, said the church is planning a blood drive in honor of Richard for the beginning of January.

The Hackensack Fire Department will hold a blood drive in his honor Nov. 30.

“Rich’s strength just amazes me. His spirit is always so high … Even in the most trying circumstances, he’s still thinking about helping others, and I think that is a great inspiration,” Fitterling said.