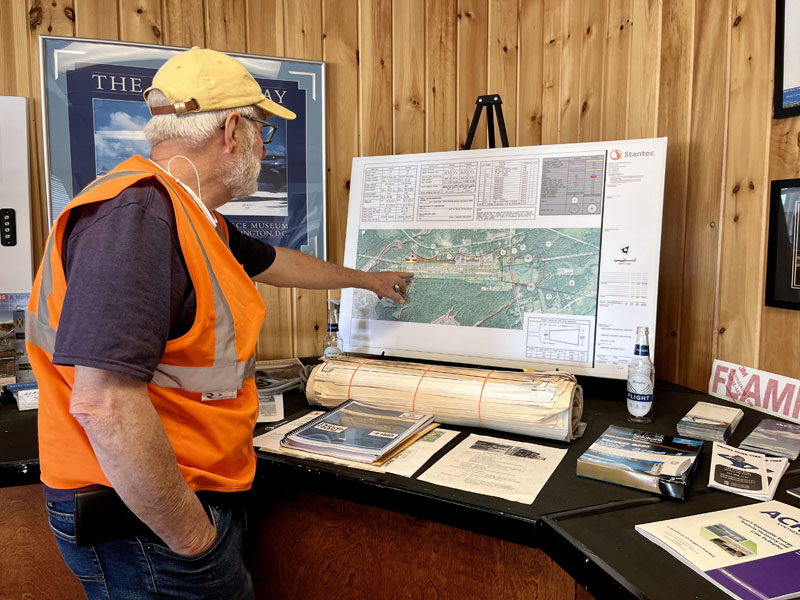 Wiscasset Municipal Airport Manager Rick Tetrev points to a plan of the runway in his office. (Anna M. Drzewiecki photo)

A construction crew hums along the long runway at the Wiscasset Municipal Airport, also known by the moniker KIWI.

“The last time the airport runway really had any major work done on it was about 30 years ago, and that’s pretty much the lifespan of a runway. So about five years ago we started a planning process,” said Airport Manager and retired naval aviator Rick Tetrev.

Highway contractor Pike Industries is currently in the process of reconstructing the runway, and the airport is closed during renovations.

The new runway will also boast new lights. Otherwise, it will replicate the old. The runway will not be lengthened.

“They actually are taking the top layer of the runway off,” Tetrev said. “And once they’ve got that off, they go down and test the soil, and make sure it’s got a good base.”

But the construction crew has found that, through freezing and thawing, large rocks have risen into their pathway. Those rocks much be cleared before work proceeds. “It has added a week or so onto the timeframe,” said Tetrev.

Putting on an orange reflective vest, Tetrev led the way outside, towards the jet fuel tanks, self-service in the winter. 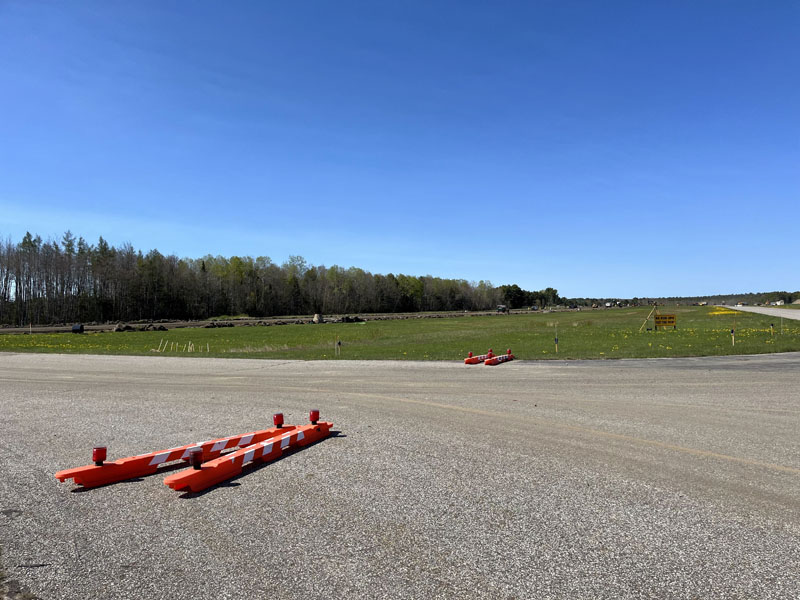 The Wiscasset Municipal Airport is currently closed for a reconstruction of the runway. (Anna M. Drzewiecki photo)

The plan uses funding from the Federal Aviation Administration to rebuild, where 90% of the airport’s funding comes from, Tetrev said. Those who usually refuel here will be able to do so again starting, hopefully, July 1. Until then, the airport is closed to flyers and those who store their planes on site. Tetrev said there are many other small airports in the area to fly into if needed.

Seventy percent of the airport’s traffic buzzes in and out in the summer through October. During those treasured months, the airport hums with life, Tetrev said. They provide a courtesy car to visitors, some of whom stop in just to go to Red’s Eats.

The airport is not just a benefit for pilots and passengers, said Tetrev.

“It’s good economically too, for the community. It brings a lot of people in,” he said.

The sun will soon bring renewed energy to the airport in another way, too: solar power.

Tetrev walks past the original hangar on site, now used as a maintenance building. Pointing first to the active hangars, some owned by the town and others privately owned, he then shifted his attention to the heaps of timber stacked past the runway. The trees were felled to clear the area for a 20-acre solar project many years in the works, he explained. 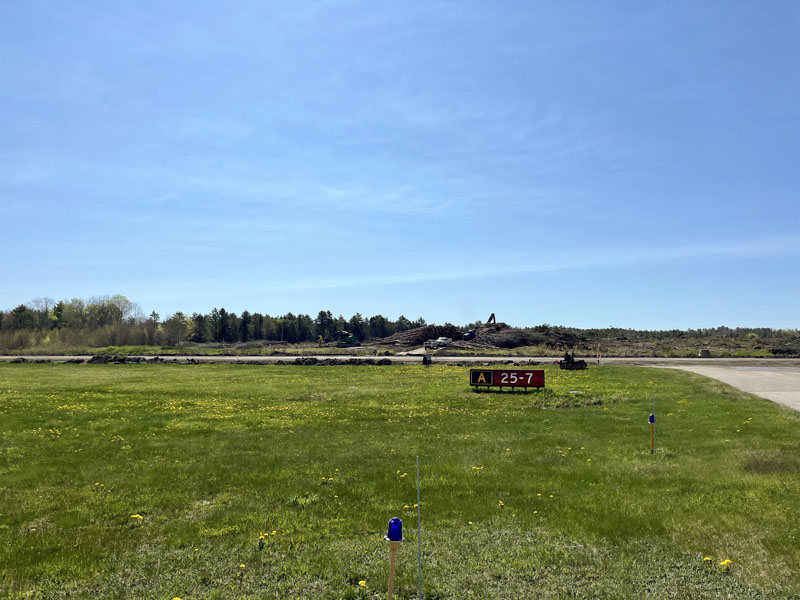 Behind Wiscasset Municipal Airport’s runway, timber is stacked where a solar-energy array will go. Construction on the runway should be complete by July 1. (Anna M. Drzewiecki photo)

Synergy Solar Inc. leases the land for solar power generation, ensuring a steady income for the airport to fund such projects as the current repairs, when needed in the future.

“It will make sure if there’s any expenses here at the airport for the next 40 years, the town won’t have to pony up any money at all,” Tetrev said.

KIWI has another project on the horizon, too, Tetrev said: Starting in September, the fuel tanks will receive a deep clean. Like the runway, the fuel tank also has about a 30-year lifespan.

In order to clean them, the fuel tanks must be emptied while a crew enters the tanks before they are refilled.

For now, a large truck drives in its elliptical pattern keeping the dust down on the current phase of the new-born runway.

“We’ll be opening by the first of July at the latest,” said Tetrev. “And we’ll still have a good summer of flying for people from away and all of our people who are hangared here.”