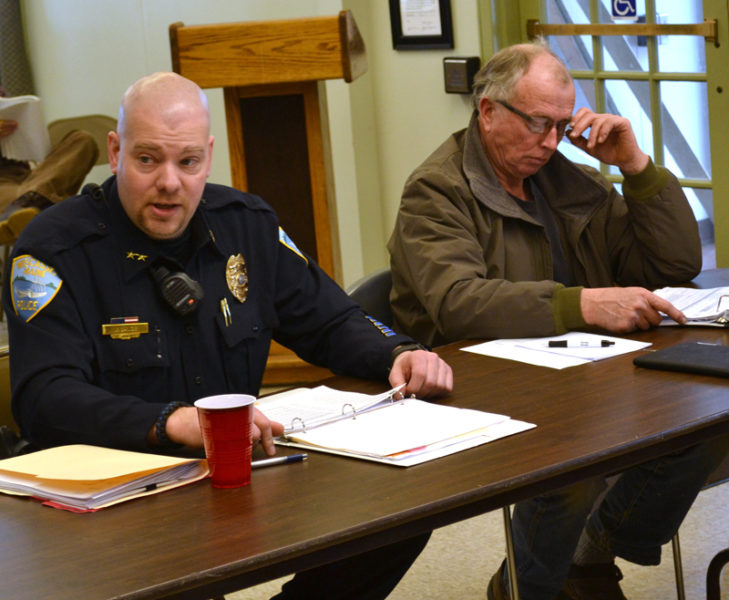 Wiscasset has the ability to generate additional revenue and save money on contracts by transferring the duties of the animal control officer, harbor master, and shellfish warden to the police department, Chief Jeffrey Lange said.

The request to transfer enforcement authority to the police department in those areas are independent of a grant application in development for a full-time community police officer, Lange said during a joint meeting of the Wiscasset Board of Selectmen and the Wiscasset Budget Committee on Saturday, Feb. 25.

If the grant is successful, however, the additional police officer could take on those responsibilities, he said.

Lange is working on a grant application to a U.S. Department of Justice program known as COPS to add a full-time officer to the department. The officer would focus on building the department’s relationship with the community, he said.

If the grant is successful, the addition of a community police officer would have no immediate impact on the budget, however, the officer could be tasked with the responsibilities of the shellfish warden, harbor master, and animal control officer, Lange said. The town is spending more than it needs to on those functions, he said in a memo to the town manager.

The grant would fund $39,533 of the cost to hire a full-time police officer, which, with benefits, is $52,710 a year, Lange said. The town would receive $39,533 a year for three years. The additional $13,177 could be covered by revenue generated from increased enforcement of shellfish regulations and collection of mooring fees at the waterfront, he said.

In 2016, there were only three citations for shellfish violations, but there have been reports that many more are taking place, Lange said.

Hentz was not aware of the proposal to give his responsibilities to the police department, he said. He declined comment on the proposal until he has an opportunity to speak with the police chief and town manager.

Wiscasset also budgets $5,000 a year for a contract with Lincoln County for animal control. Transferring those responsibilities to the police department would streamline information and save the town money, Lange said.

There is also a proposal on the table to add metered parking to new parking spaces proposed in the Maine Department of Transportation’s downtown traffic project, Lange said. (See related article.) If the project goes through, metered parking will require additional parking enforcement, which a community police officer would be able to handle, he said.

The vision is to station the community officer in the downtown area and the waterfront. The officer’s mission would be to build on the department’s relationship with village residents and business owners, Lange said. The new officer will not require a patrol vehicle, but would be given a bicycle already at the department, he said.

The grant can be applied for every three years and future grant applications, after the community police officer’s three years run out, could focus on the school resource officer, Lange said.

Lange will have more information about the grant in the spring, but the request to fold the harbor master, shellfish warden, and animal control officer into the police department are not contingent on the grant’s success, Lange said.

The Wiscasset Board of Selectmen will consider Lange’s request at a future meeting, selectmen said.