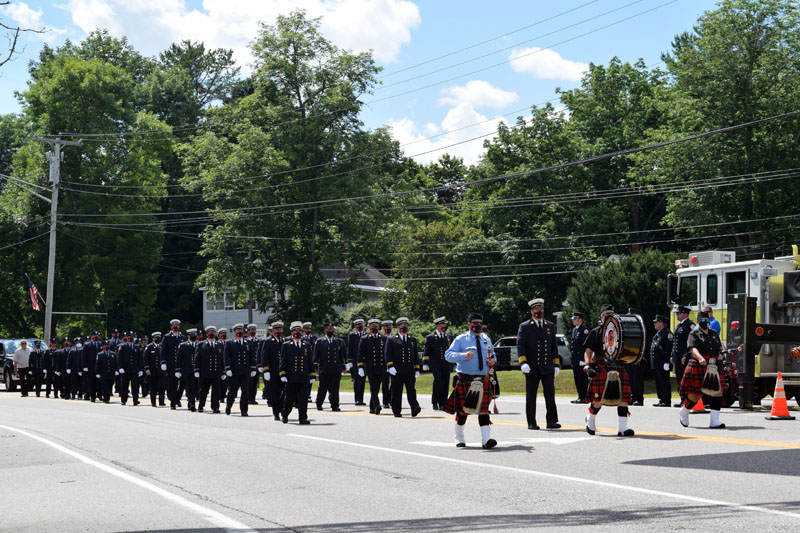 The Bergen County Firefighters Pipe Band and the Hackensack Fire Department, both of New Jersey, march on Route 1 in Wiscasset to honor Hackensack firefighter Richard Kubler. Kubler, 53, of Wiscasset, died July 25 of cancer linked to his service at ground zero after the 9/11 terrorist attacks. (Hailey Bryant photo)

On Saturday, Aug. 1, a 10.8-mile funeral procession along Route 1 from Bath through Wiscasset honored Richard Kubler, a former New Jersey firefighter and recent transplant to Wiscasset who died July 25 of cancer related to his service at ground zero after the 9/11 terrorist attacks.

The Hackensack Fire Department, of New Jersey, where Kubler worked from Jan. 5, 1998 to Jan. 1, 2020, called Kubler’s death a “line of duty death” because of the liver cancer that doctors said likely resulted from his exposure to toxic airborne chemicals at ground zero after the attacks on the World Trade Center in New York City.

A 1941 Mack open-cab fire engine carried the casket in the procession, complete with full firefighter’s honors, from Daigle Funeral Home in Bath to the First Congregational Church of Wiscasset. Bagpipes played “Amazing Grace” as the pallbearers carried the casket into the church.

Only family and co-workers, including several members of the Hackensack Fire Department, attended the service because of COVID-19 public health guidelines, but the service was livestreamed.

The three co-workers of “Richie,” as he was known around the Hackensack firehouse, all spoke glowingly of their “brother,” his ability to spread cheer, his strong work ethic, and his knack for teaching people new things.

Lt. Timothy Rice recalled a time early in his career when Kubler rang the fire bell, startling Rice into action. Rice found Kubler standing next to the fire bell with his wide smile, laughing and indicating a prank had been pulled on the new guy. 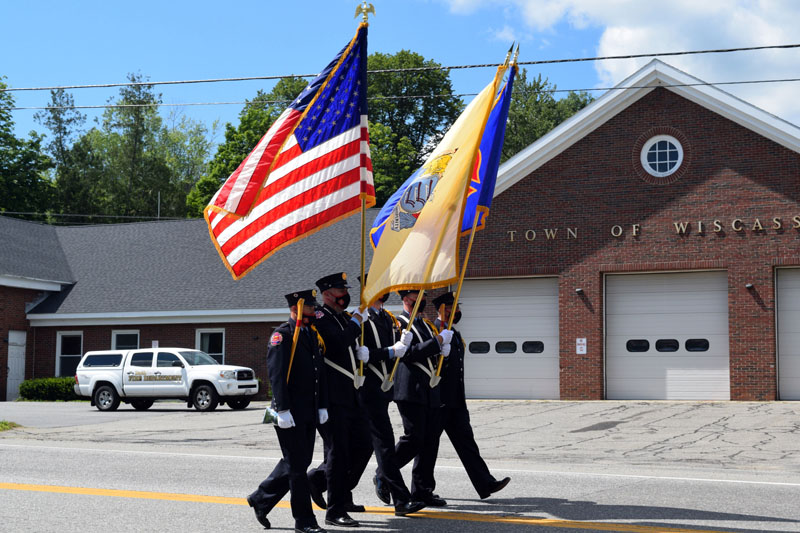 A color guard from the Hackensack Fire Department, of New Jersey, marches in a procession to honor firefighter Richard Kubler on Route 1 in Wiscasset, Saturday, Aug. 1. (Hailey Bryant photo)

“In closing, I know that I can say what every other fire officer would say that rode in the seat before me next to Richie — Richie was one of the most knowledgeable, dependable, and hardworking firemen in the firehouse. Every officer knew that whatever task Richie was assigned, we had full confidence the job was getting done,” Rice said.

Firefighter Seth Brown said Kubler, whom he called “Richie Rich,” was his friend and mentor and someone he could always call for advice or help.

Firefighter Roberto Burgos talked about the support for Kubler after his diagnosis and the brotherhood and sisterhood that binds firefighters everywhere.

“He would tell me how beautiful it was in Maine. But what he never told me was how beautiful and helpful Mainers are. I guess he wanted me to see that for myself. And that was demonstrated by the Bath Fire Department,” Burgos said. 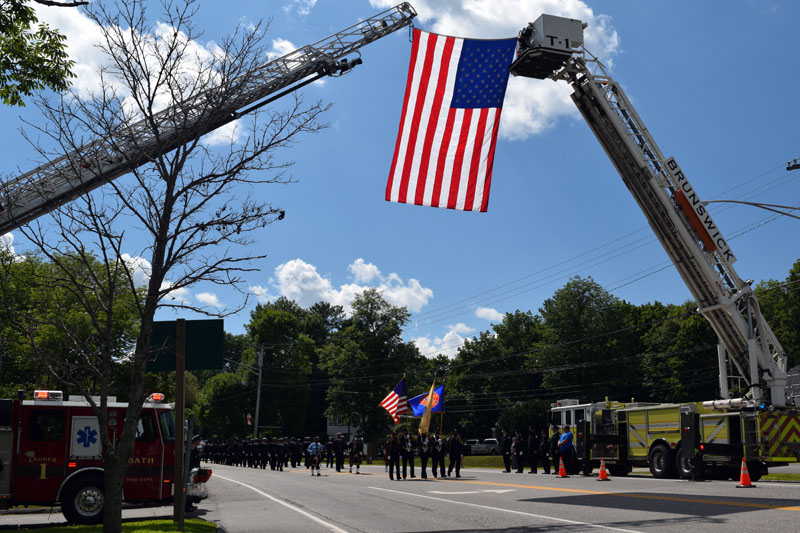 Fire trucks from Bath and Brunswick hold an American flag over Route 1 in Wiscasset, Saturday, Aug. 1, during a procession in honor of firefighter Richard Kubler. (Hailey Bryant photo)

Susan Kubler, Richard Kubler’s wife, talked about the strength of that brotherhood by phone Monday, Aug. 3.

After Richard’s retirement party at the Kennebec Tavern in Bath this past January, the Bath Fire Department became involved with Richard and the Hackensack Fire Department.

“They had a real friendship going and kind of adopted us because we didn’t know anybody before that date. They kept calling us, saying, ‘Do you need anything?’” Susan said.

After a bad storm this year, members of the Bath Fire Department cleaned up the Kublers’ yard of fallen trees and debris — just one example of how they looked after their brother firefighter during his final months.

“I can’t believe they would go out of their way for people they barely know. It means so much to me and it meant the world to Rich that they would do that,” Susan said.

“It’s amazing, that brotherhood. I have to say I think the Bath Fire Department exemplified that to a maximum degree,” Susan said.

Richard Kubler is also survived by his daughter, Lauren; stepdaughter, Alessandra; his parents; his brother, Robert and his wife Kate; and several nieces and nephews. 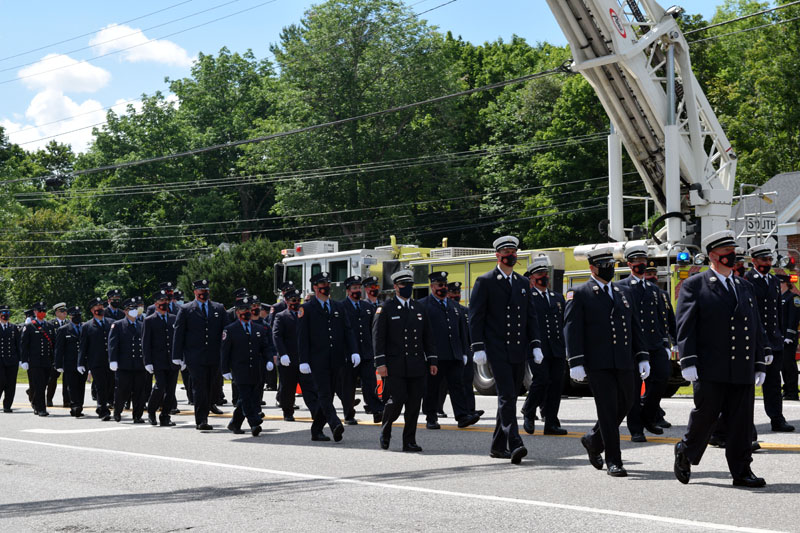 Richard grew up in Hasbrouck Heights, N.J., where he became a licensed electrician for the family business after high school. On a suggestion from friends that he join the town’s volunteer fire department, he began his long career as a firefighter.

“A lot of his friends had joined, so there was a camaraderie with the guys you grew up with. He grew to love it. I think he really felt at home there, where you kind of get embraced by a society of people who have the same mindset,” Susan said.

Richard served as a volunteer for about 12 years. After taking an exam to become certified as a firefighter and being chosen from a waitlist of applicants, Richard was hired by the Hackensack Fire Department on Jan. 5, 1998, beginning his time as a career firefighter.

Sept. 11, 2001 called all first responders in the vicinity of New York City into action. Richard, along with the entire Hackensack Fire Department, volunteered to work in the mass of debris from the fallen twin towers, known as “the pile,” for four straight days, digging through the rubble to search for survivors and human remains. 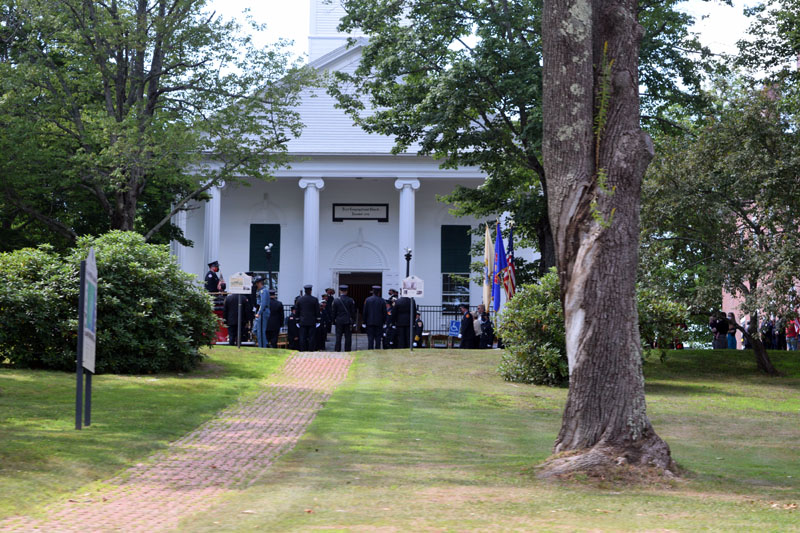 Family and friends of Richard Kubler, including many fellow firefighters, gather outside the First Congregational Church of Wiscasset, Saturday, Aug. 1. (Hailey Bryant photo)

Susan said Richard did not like talking about that experience. She said it was only something he could talk about with people who had been there and understood how it felt.

John Fasulo, a firefighter who worked beside Richard at ground zero and was diagnosed with lung cancer as a result, also has trouble talking about the experience.

Fasulo, who is enrolled in the World Trade Center Health Program, said he helped Richard enroll after his diagnosis.

Fasulo reminisced about good times with Richard, including firehouse pranks. 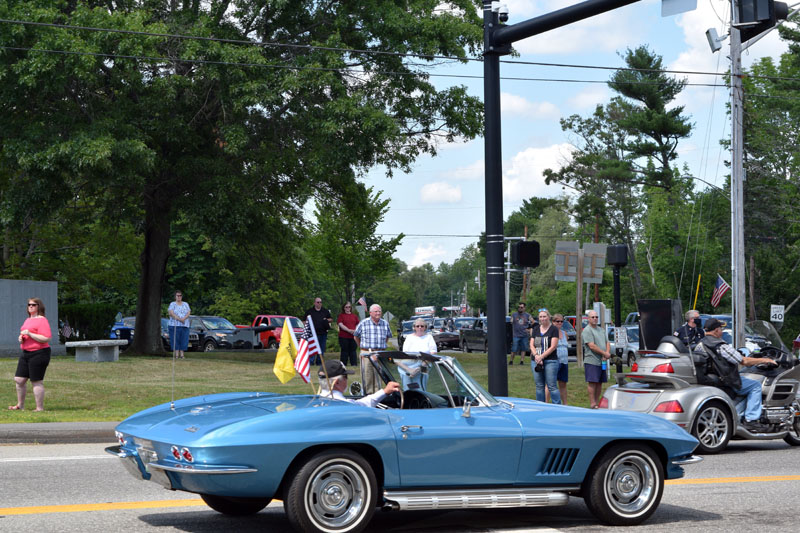 “The thing with Richie was, ‘It is what it is.’ We’d used to go out on these crazy calls and he’d say, ‘It is what it is.’ That’s a way you get through some of those tough times, a lot of tragedy … but it’s the best job in the world,” Fasulo said of being a firefighter.

Richard had an intense and lifelong love for boating and Maine. He had visited his family’s camp on Spednic Lake, on the border with New Brunswick, every summer since infancy.

After his diagnosis in October 2019, Richard and Susan decided to move into their vacation home in Wiscasset full-time while Richard underwent treatment for his cancer.

Last November, after settling in Maine, Richard began calling for blood and blood platelet donations because of a nationwide shortage of both. He said he could not undergo certain tests because there were not enough platelets available to clot his blood.

The First Congregational Church of Wiscasset held a blood drive in honor of Richard in January. 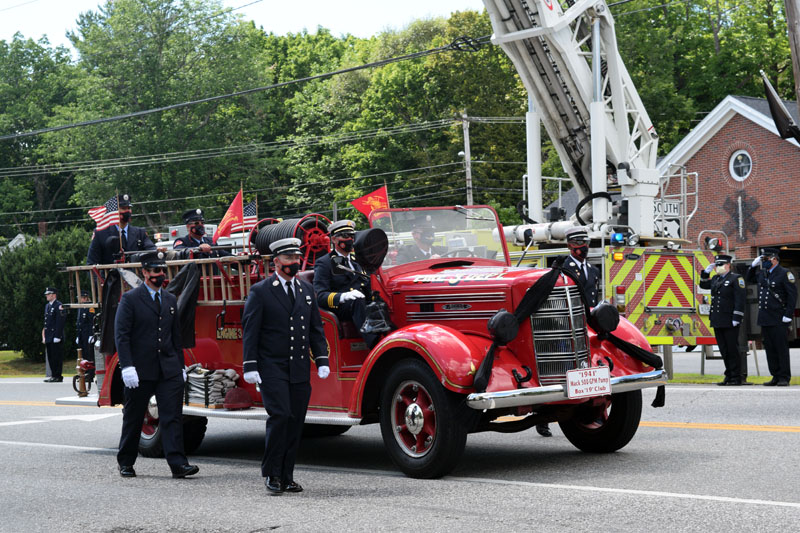 Black bunting covers the lights of an antique fire truck during a procession in honor of firefighter Richard Kubler on Route 1 in Wiscasset, Saturday, Aug. 1. (Hailey Bryant photo)

“He loved the natural beauty, he loved that you had room to breathe, he loved the pine trees … he loved the laid-back life that’s here, the better work balance, he just loved Maine,” Susan said.

Susan joked that Richard should have been compensated by Maine’s tourism bureau because of how much he talked up the state and encouraged friends to visit.

One of Susan’s fondest memories is of the notes Richard would leave for her that she has stashed in various places to remind her of his loving and caring nature.

“He would always have calming words,” Susan said.