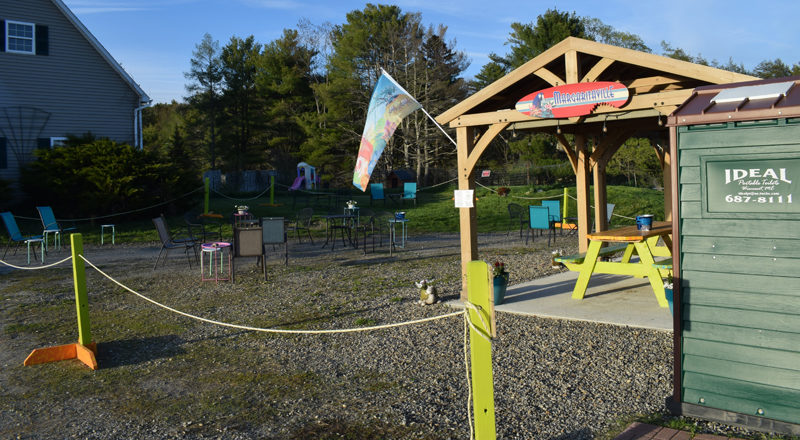 The outdoor seating area at the Cubbyhole Sports Pub in Wiscasset. The pub reopened Monday, May 18. (Evan Houk photo)

The Cubbyhole Sports Pub, on West Alna Road in Wiscasset, reopened Monday, May 18 after closing May 6 due to three violations of liquor rules – including one involving COVID-19 restrictions.

The Maine Bureau of Alcoholic Beverages and Lottery Operations cited the pub May 6. One of the three citations involved a violation of a March 18 executive order by Gov. Janet Mills.

The order required all restaurants and bars to close to dine-in customers, although they could continue delivery, drive-thru, and takeout service. The governor later amended the order to allow restaurants in rural counties to offer dine-in service, with restrictions, starting Monday, May 18.

The Cubbyhole will be open from 11:30 a.m. to close, Thursday-Sunday, in the coming weeks.

According to Kyle Hadyniak, director of communications for the Maine Department of Administrative and Financial Services, the violations were for serving alcohol on premises, a violation of the COVID-19 executive order; serving alcohol in an unapproved area outdoors; and giving away Jell-O shots with meals. It is illegal for a bar to offer free alcohol of any kind.

Hadyniak said a complaint spurred the inspection and subsequent violations.

In a phone interview, Hadyniak said the Cubbyhole is the only establishment in Lincoln County that has received a liquor violation relating to the executive order.

Hadyniak said the amount of each fine has not been determined, but none will exceed $1,800.

As for the violation of the executive order, she said customers were having drinks, all 6 feet apart, while waiting for takeout orders when the liquor inspector visited.

Chapman and her business partner, Lettie Mott, are essentially the only employees of the Cubbyhole. Chapman tends bar, while Mott cooks.

The business shut down for five weeks in the wake of the March 18 executive order.

“They wanted everyone to shut down for five weeks, and we did. Then when they said it was going to be another month, we had to do something. We were using up all our savings,” Chapman said.

In addition, Chapman had recently paid $910 to renew her on-premises liquor license before its expiration March 30.

“We couldn’t even make any money to pay that off,” Chapman said.

Chapman expressed gratitude to the Bureau of Alcoholic Beverages and Lottery Operations and to Larry Sanborn, liquor licensing and inspections unit supervisor, for working with her to reopen the pub.

“He said, ‘Don’t worry about the fines. We want to get you up and running for Monday,” Chapman said in a phone interview May 12.

Chapman said that when she received the fines, she feared she would have to permanently close the business she has run since March 2018. Before that, Chapman and Mott had operated the Wiscasset General Store at the same location since 2012.

Sanborn told Chapman she did the right thing by closing immediately after receiving the violations.

“I’m just so grateful we are able to stay open,” Chapman said. “We have so many great friends and customers who love this place.”