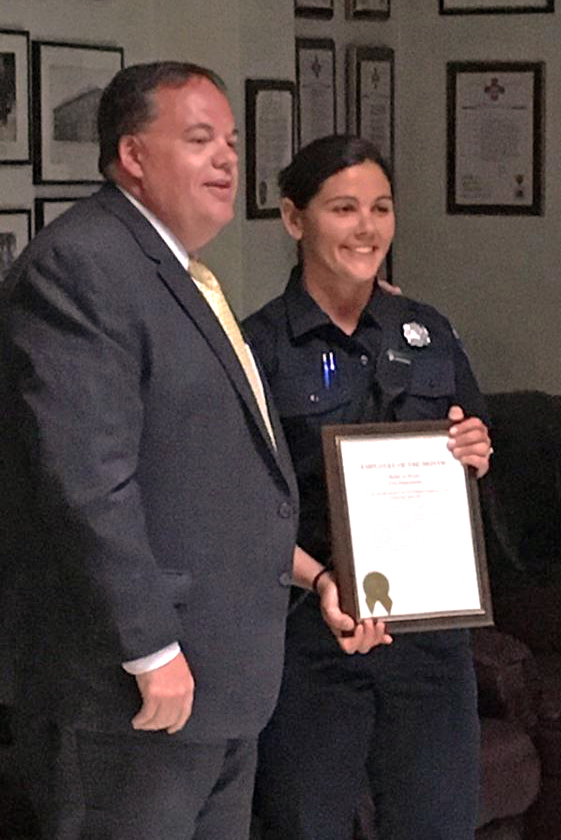 Wiscasset resident Bobbi Jo Weeks began her career in the fire service as a volunteer with the Damariscotta Fire Department. She was recently named the city of Portland’s April Employee of the Month for her work as a full-time firefighter and paramedic with the Portland Fire Department.

Weeks was selected for the “distinct honor from a workforce of over 1,300,” according to a resolution the Portland City Council adopted in her honor at its June 5 meeting.

The award was “a complete surprise,” Weeks said. In late May, she was asked to report to her station in uniform for what she thought was a meeting with the chief. “I was a little bit nervous, to be honest,” Weeks said. “I wasn’t sure what the meeting was for.”

The mayor, city manager, and her co-workers at the Bramhall Station showed up and lined the walls to hear the announcement that Weeks had been selected as Portland’s April Employee of the Month.

Weeks, a paramedic and firefighter, was selected “for her dedication, her proficiency at her work … and her compassion for her patients and this city,” according to the resolution.

Weeks was introduced to the fire service through her work as an emergency medical technician with the Central Lincoln County Ambulance Service, where she worked from 2009-2011.

Several of her co-workers were also volunteer firefighters with the Damariscotta Fire Department, and she decided to join. “I really enjoyed it,” Weeks said. “I enjoyed the community aspect of it. It was a brotherhood. It was the family I never had growing up.”

While a volunteer with Damariscotta, Weeks obtained her firefighter I and II certifications. She decided to continue her career as a full-time firefighter and was hired by the Portland Fire Department in 2011.

Weeks works as both a firefighter and a paramedic for the Portland Fire Department, and loves “the adventure of everyday,” she said. “Every single call is a new adventure, and a different puzzle that we get to piece together.”

While she no longer volunteers with the Damariscotta Fire Department, “they’ve always been so supportive, even since I’ve been here,” she said.

Weeks is a certified yoga instructor and teaches classes at Wicked Good Yoga in Wiscasset. She offers free yoga classes to the emergency responders of Portland and neighboring communities, according to the resolution.

Weeks “strives to better her work environment and improve the overall health and mental well-being of her co-workers by sharing her passion of yoga,” according to the resolution.

Yoga is an important tool in the high-stress environment emergency responders work in, Weeks said, which is why she began to volunteer her time to teach free classes for Portland’s emergency services, including the city’s fire and police departments.

“I saw a need,” Weeks said. “A lot of the guys I work with didn’t have much experience with yoga, mindfulness, or breath awareness.” Her classes are focused on controlling and regulating the nervous system through breathing exercises.

“You don’t need to twist yourself into a pretzel” to do yoga, Weeks said. “It really is about breath and awareness.”

That awareness is important when the tones go off and the sirens sound, Weeks said. It helps responders stay present in the moment, regulate their nervous system, and cope with the stress of traumatic situations.

The emergency responders who have participated in the classes “have really benefited from it,” Weeks said. “I’ve gotten really positive feedback.” The classes were among the reasons listed for her selection as Portland’s April Employee of the Month.

Weeks is now in the running for the city’s Employee of the Year.