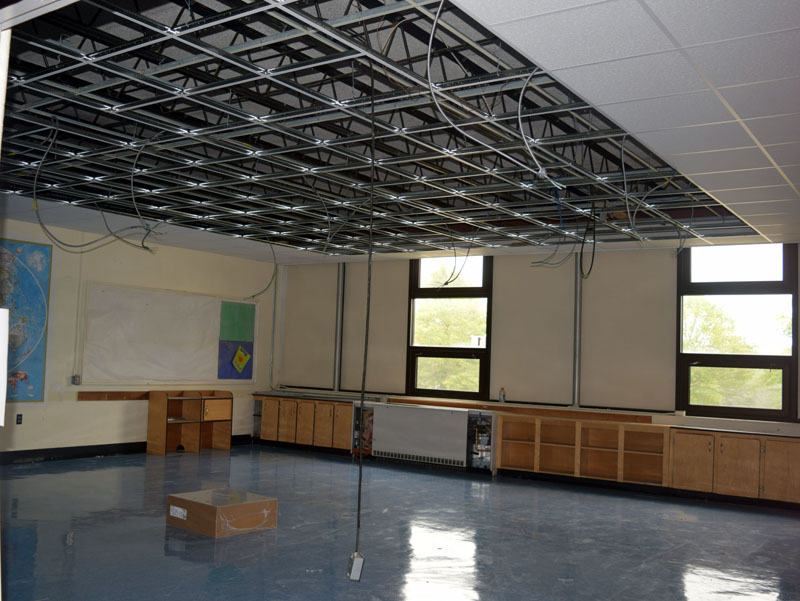 Drop ceilings are being added to 13 rooms on the east side of Wiscasset Middle High School to mount new light fixtures that will support LED bulbs. (Jessica Clifford photo)

Contractors started work on the Wiscasset School Department’s long-awaited energy project in late June. The project consists of a series of improvements to save energy at department buildings, including installation of insulation, LED lighting, and new windows.

The project will result in an approximate yearly savings of $45,000, mostly from electricity costs, according to Wiscasset School Department Director of Transportation and Maintenance John Merry.

The work is taking place at the Wiscasset Elementary School and Wiscasset Middle High School, as well as the department’s bus garage and central office.

The energy project is being funded through a $1.55 million lease-purchase agreement with a bank for a duration of 15 years, according to former Wiscasset School Department Superintendent Heather Wilmot.

Voters had rejected the Wiscasset School Department’s original proposal of a $1.75 million energy conservation performance contract with Siemens Inc. at the annual town meeting by referendum in 2017. The committee had proposed either a lease-purchase agreement or a bond.

Before the vote, the financing was going to be a lease-purchase agreement because it does not require a town vote. However, the Wiscasset Board of Selectmen urged the school committee to bring the matter to town meeting because of the hefty cost.

Before school starts in the fall, there will be “significant completion” of the project. The contractors will have all work in classrooms finished, and any remaining work in hallways, offices, or closets will be completed in the evenings.

In total, the project will change out approximately 1,980 light fixtures to support LED bulbs. Most of the project’s savings will come from swapping bulbs of 32 or 40 watts for those of 8 watts. All the new lights will have motion sensors, and will automatically dim and turn off after people leave the area.

At Wiscasset Middle High, drop ceilings are being added to 13 classrooms on the east side of the school to mount the new light fixtures, Merry said. Large boxed light fixtures in a few rooms in the school, such as the library, will also be changed out.

A total of 42 new windows are almost completely installed on the west side of the back of the school. The old wood-framed windows are being changed to vinyl framing because it offers better insulation and less upkeep.

Other work will include the installation of a propane Viessmann boiler in the boiler room to supply hot water to the bathrooms and kitchen. This boiler is in addition to the other new boiler.

At Wiscasset Elementary, the lighting fixtures and LED bulbs are still being changed and the caulking on poorly sealed windows at the front and back of the school is being replaced.

A new brick facade and vinyl-framed windows were installed on the front west side of the elementary school.

A change was made to a unit ventilator, used for heating and cooling, to regulate the water flow in the machine and allow the school to turn off the single unit instead of every unit on the first floor.

The department’s central office will have a new furnace to replace the building’s original furnace, and insulation will be added in a crawl space near the roof.

At the bus garage, the department will install an electric pump, which will supply heat and air conditioning more efficiently to the drivers room, office, and bathrooms.